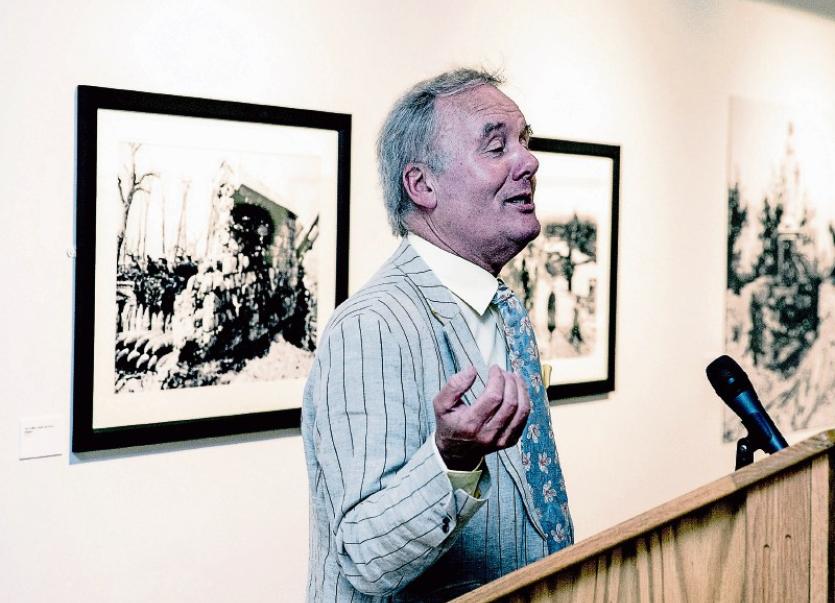 Kevin Myers, pictured here opening an exhibition in the Hunt Museum two years ago, has withdrawn from the Civic Trust's panel of talks Picture: Keith Wiseman

FORMER Sunday Times columnist Kevin Myers has withdrawn from moderating a talk on censorship in Limerick, after his appearance on the line-up provoked a storm of “vitriolic” abuse.

Mr Myers, who was dismissed from the Sunday Times last month, was due to moderate a talk in Limerick city on September 28 on the subject of censorship, which will be given by Jodie Ginsberg, of the Index on Censorship.

Ms Ginsberg, who leads an organisation which publishes the work by censored writers and campaigns for free expression worldwide, is the only female speaker in the series of talks organised by Limerick Civic Trust.

The Sunday Times published an apology following the publication of an article on July 30 last by Mr Myers, which contained offensive remarks about women and Jewish people, suggesting that presenters Vanessa Feltz and Claudia Winkleman were well paid by the BBC because they were Jewish.

David O’Brien, chief executive of the trust, told the Limerick Leader that he has spoken at length to Mr Myers in recent days, who felt it was best he withdraw from the forum “in the present circumstances”.

“He felt that his presence was going to take away from the event itself and become an alternative event, and that just wouldn't be right,” said Mr O’Brien.

"Limerick Civic Trust respects the decision of Kevin Myers. A long-standing journalist in Ireland, Kevin has been no stranger to controversy and initiated many strenuous debates over the years. The trust does not comment on his comments.

"However, the purpose of the autumn lecture series is to educate, inspire and inform public discourse. The series has been designed to challenge ideas and opinions, tease out arguments and hold a constructive debate and for that reason some of our commentators may be more controversial than others," he said.

The talk will now be moderated by Church of Ireland Reverend Patrick Comerford, of Rathkeale and Kilnaughtin.

Ms Ginsberg told The Irish Times last week that she was “happy” for Mr Myers to moderate the event, while the trust also refused to withdraw the invitation after receiving a barrage of criticism.

“I wouldn’t be much of a free speech advocate if I refused to debate with someone whose views I disagree with,” said Ms Ginsberg.

“I am a feminist of Jewish heritage: I find much of what Myers has written deeply offensive. Rather than giving him the opportunity to repeat these views, I see the Limerick talk as an opportunity to air mine.”

Mr Myers was invited by the trust to moderate the event about five weeks before the column which led to his dismissal from the Sunday Times, appeared in print.

Mr O’Brien said the time-line of events is indicative that the invitation was not a “provocative, calculated” move on their part to attract a greater audience, which critics suggested.

The trust received a number of “distasteful emails, full of vitriol” regarding Mr Myers’ name on the billing, as well as abuse on social media, in addition to criticism of its “male dominated” line-up of speakers.

After Mr Myers’ column appeared, Mr O’Brien said he felt he was “in a position where I couldn’t censor him”.

“That would have been the easy thing to do. We had to look at the bigger picture, and it would have been too easy have a knee-jerk reaction, box him off and put him in a cell. I think we need to be bigger people and be more enlightened,” he said.

Ms Ginberg’s talk, entitled ‘How censorship stifles debate and undermines the tenets of free and democratic societies’, will be given in St Mary’s Cathedral, on September 28 next.

Mr O’Brien said they “weren’t seeking to have a male-dominated panel”, and admitted while “there is a gender imbalance, but it wasn’t contrived”.

“In fact, we invited a lot of women, who weren’t available but have indicated their willingness to take part next year. So, in fact, next year it is quite possible that we will have a female-dominated panel,” he told the Limerick Leader.

He said approximately 30 invites were sent this year, “with the majority of invites being sent to women”.