University of Limerick president fears for 'erosion of autonomy' after controversies 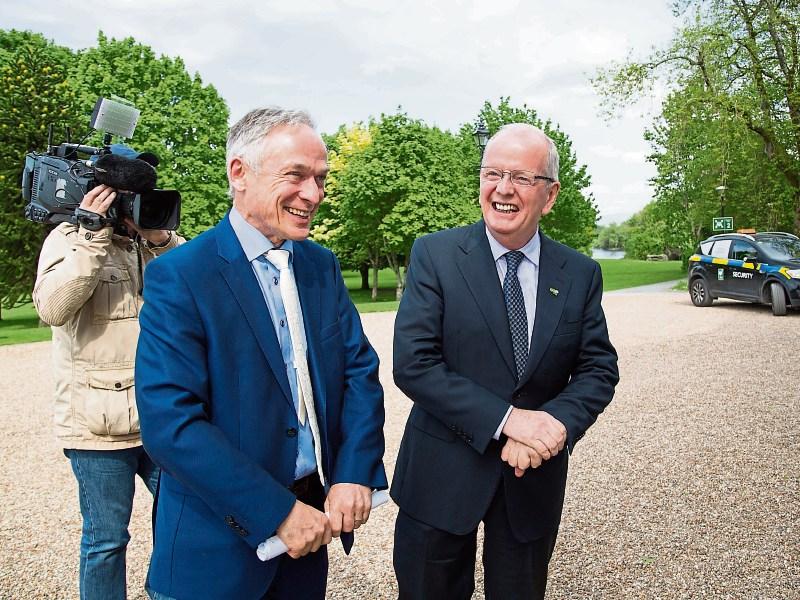 'No evidence of anything illegal' brought to the attention of Dr Des Fitzgerald, pictured with Richard Bruton, as review continues

THE president of the University of Limerick has expressed fears that the autonomy of universities will be ‘eroded’ if greater powers are granted to the Higher Education Authority.

As a result of the UL controversy and high levels of spending in other third-level institutions, the Minister of Education and Skills is finalising provisions to grant more authority to the HEA.

This includes new powers in allowing the authority to impose an ‘investigator’ on higher education institutions.

“​This is a serious erosion of the autonomy of the university, often stated to be a pillar of the Government’s policy on higher education, and a central tenet of the Universities Act,” wrote Dr Des Fitzgerald in an email circulated to UL staff.

UL had resisted attempts by the HEA to appoint an investigator to examine a range of misconduct allegations, regarding its finances and governance, after they were brought to public attention by three whistleblowers in the finance department.

However, when he took up office this May, Dr Fitzgerald reversed UL’s position and called on the authorities to conduct a full inquiry.

While a range of issues are being examined by Dr Richard Thorn, former president of Sligo Institute of Technology, they are not being reviewed by a State “visitor”, which is designated under the Act as a sitting or retired High or Supreme Court judge.

Dr Thorn is examining up to two dozen complaints made against UL by current and former staff, in the areas of finance, human resources and governance.

A report is due in the autumn, with any corrective measures against UL to be taken by the Higher Education Authority (HEA) and the Department of Education & Skills.

More than 25 people have now been interviewed, with several “traumatic testimonies” being provided.

Speaking on Limerick’s Live95FM, Dr Fitzgerald said that issues regarding its finances, which have been the subject of considerable controversy, are “not a cultural issue”, and nor has any evidence of any illegal affairs been brought to his attention.

Instead, he said, issues have arisen around “the scale of the university and how rapidly it has built up suitable management programmes.”

“The management [structure] was too lean for the scale of the organisation that’s there,” he said.

Two employees from UL’s finance department remain suspended for two years and two months with full pay, at a cost in excess of €120,000 to the State.

The women refused to sign confidential severance agreements of nearly €60,000 each to end their dispute with UL, which they claim arose as a result of questioning expenses to some senior staff.

“It’s not appropriate that people should be on paid leave for a period of two years. It started out as a fairly simple issue for members of staff. That escalated and shouldn’t have been allowed to escalate,” he said.

Addressing legal action taken against the Limerick Leader regarding the first report on financial allegations, he said: “I wouldn’t have done that. It was a mistake.”