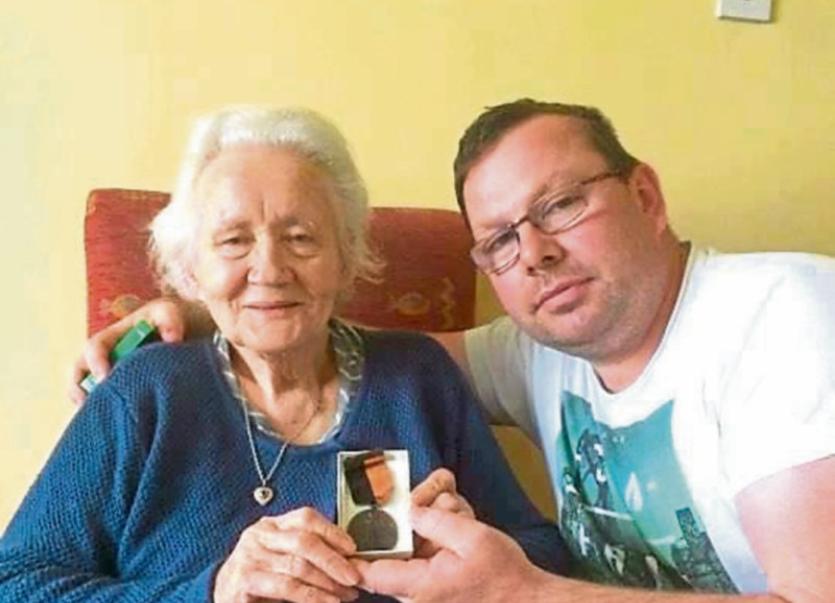 Owen O’Brien, his aunt Mary Daly and her uncle’s medal - below, friends and relatives pay their respects at the grave

THE FAMILY of a Limerick man awarded the Service Medal (1917-1921) almost a century after his passing held a poignant celebration in his honour.

Owen O’Brien, born in 1891 in Holycross, Bruff, was the Mid-Limerick Brigade IRA Vice-Commandant during the War of Independence. He died in an internment camp in March 1923, aged 32.

His descendants petitioned President Michael D Higgins to posthumously recognise their relative and a Service Medal was issued in recent months. A grand nephew of Owen, Liam O’Brien, of Shannon Banks, said they held a commemorative Mass at St Saviour’s Dominican Church, with family and friends on August 5.

The celebrant was president of Thomond Archaeological and Historical Society, Canon Donough O’Malley with family members performing the readings and the prayers of the faithful. 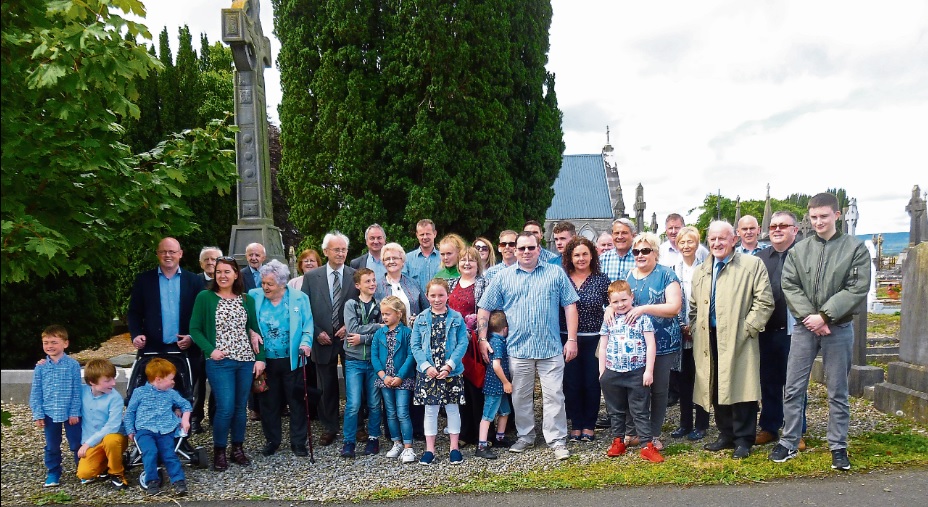 “Canon O’Malley gave a glowing tribute to Owen as well as his comrades who had fought for our independence a century ago,” said Liam. After Mass the congregation made their way to the Republican plot in Mount Saint Lawrence Cemetery to pay their respects at the graveside of “the hero of the family”.

Also in attendance was Des Long, chairman of the Republican Graves Committee. At the graveside, Lucy Hynes recited a decade of the Rosary “as gaeilge” and sang a lovely lamentation as her own personal appreciation for her uncle, owing to his love of Irish Culture and language. Her brother Willie O’Brien was also in attendance, however, their sister Mary Daly was unfortunately unable to attend though she was foremost in everyone’s thoughts.

Her granddaughter Rosemary Collier played a wonderful rendition on the violin of Marbhna Luimní (Limerick’s Lamentation). Owen O’Brien had the honour of laying a wreath to his namesake granduncle and he will keep the service medal. The day ended with a passionate rendition of Amhrán na bhFiann.

Liam said: “This wonderful commemoration was a fitting celebration for a man who had made the ultimate sacrifice for his country 94 years ago.”