#WATCH: Roy Keane tells all in Limerick - 'Have I stepped out of line? Damn right!' 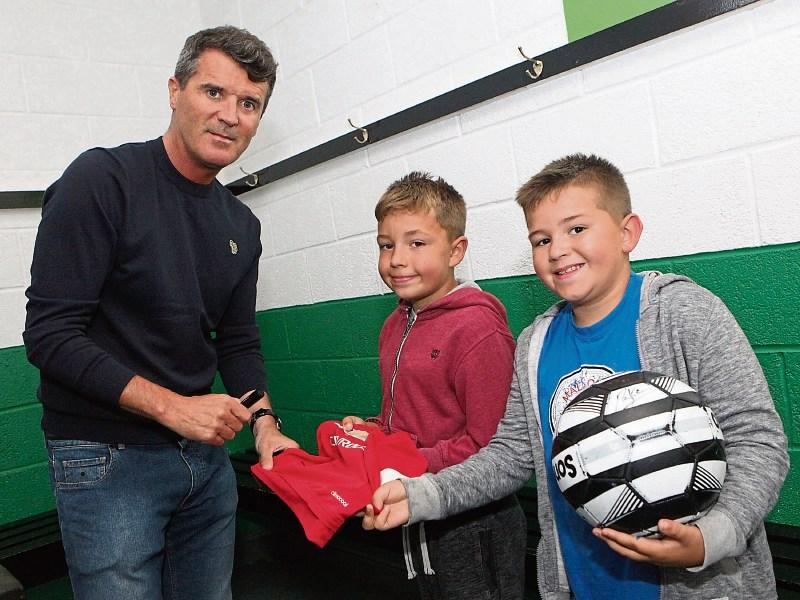 ROY KEANE told story after story at a fundraiser for Cappamore Celtic FC but the one from when he was a boy gives the best understanding of the man.

All the controversies and bust-ups - from Saipan to Peter Schmeichel - were tackled during two hours in Hayes’ function room in the village on Friday night. Throughout his career, he said he was the same as when he was a youngster playing with Rockmount AFC in Cork city.

“I fell out with fellows when they were late for training at 11, 12 years of age. Eric Hogan was a good friend of mine and we were training with Rockmount. I was passing his house, we were living in Mayfield and we were walking out to training.

“He said, ‘I’m not going training, I’ve got a new skateboard’.

“‘You’ve got a new skaaateboard?’ I was a bit jealous at the start. I said, ‘You’re not going training because of the skaaateboard?!’.

“We didn’t speak for five years after that!”

Words on a page don’t do him justice. He tells it brilliantly with that instantly recognisable Cork lilt. The full house erupted into laughter. Roy had everyone eating out of the palm of his hand.

He was joined on stage at the start by local man Noel Mooney. Roy was in Cappamore at the request of his good friend, who is the UEFA head of development, and former Cork City, Shamrock Rovers and Limerick FC goalkeeper. Noel was a schoolboy player at Cappamore Celtic and is now president of the club despite living in Geneva, Switzerland. All the monies raised will go towards pitch development.

Roy arrived early with Noel and strolled out onto the pitch on the edge of the village. “Is there always this big a crowd at training?” he quipped, before watching the youngsters being put through their paces.

The Leader grabs a minute with him in the dressing rooms and the one thing an even reasonably competent reporter would do before interviewing Roy Keane is put your phone on silent. There is a famous clip of Roy going through a journalist for a short-cut after his mobile went off during a press conference. Local garda, Bill Collins could have arrested this reporter for lewd behaviour such was the frantic hand movements in my pocket to turn it off but Roy was non-plussed. He signed every autograph and posed for every photo that he was asked. One girl told her friends, “I just got my hair done”. Whatever “it” is, Roy has “it”.

He said what Cappamore Celtic FC is trying to do is “fantastic”.

“Hopefully tonight will help them along the way. It has been a nice trip to Limerick, really enjoyable,” said Roy, after a day in Newcastle West, St Gabriel’s School in Dooradoyle and now east Limerick.

Organisers could have easily sold 1,000 tickets or a multiple of that, so what is it about Roy Keane that always attracts interest?

“Tickets are fairly cheap - €20. I thought it would be €100 a head, I’m only joking. It is nice there is a bit of interest. People are supporting their club and hopefully we’ll give them a good night,” he said. Mike Aherne, interviewer, had an easy role as all he had to do is ask a question and Roy did the rest. Afterwards, I don’t think anyone would have minded paying €100.

“You need a few breaks in sport. Had I given up hope at 18 and 19 of going to England? Probably and then Nottingham Forest came in. I had played League of Ireland for a year and that was great for me.

“A scout brought me over for a trial and said he thought ‘I would have swam over’ and he was right. I had nothing to come back to, no education, nothing to fall back on. I looked out the window dreaming about being a footballer but you have to work hard at school too. Even at the end of my career I still couldn’t get my head around going to work everyday as a footballer, getting paid, playing with good fellows.

“Your dream could be to become an astronaut, doctor, playing rugby - I hate this negativity, follow your dream. My dream was a reality and I still count my blessings.”

“I was asked who was the better manager by a guy looking for an angle and I said Brian Clough. Brian Clough gave me a chance, it wasn’t a case of me knocking Alex Ferguson.

“I had a great time at Nottingham Forest. Is Ronaldo better than Messi? They are both brilliant players and they were two great managers.

“Brian Clough came up to me before my first match and said, ‘I’ve been watching you in pre- season - you can control it, you can pass it, you can move and just do that’. That is my career in a nutshell. Football is a simple game. My message is ‘keep it simple, stupid’, do it quickly and you have a chance.

“Everything about Man Utd suited my character - it was a reflection of me and Alex Ferguson was [a reflection of me]. We have both said that since we fell out - we were both very similar and that can eventually burn out.”

“I enjoyed every minute I was there [Man United]. If you are there for 10/12 years you are going to win trophies as sure as night follows day. People say to me, ‘You dragged the team along, you were the winner, you were determined’. Believe me, all the players at Man United were the exact same.

“Maybe I showed it differently, maybe I was more vocal - 99.9% was sheer encouragement. My job [as a senior player and captain] was to push people, push buttons. There are going to be tensions, tension is a good thing, I like tension. Sometimes you fall out with people in a good way because you are challenging each other. I’d love to meet people who have been in a dressing room with no disagreements. I was learning my trade and these responsibilities came to me slowly.

“Do you think I would survive if I was some kind of headcase going to work everyday? I think everybody thought I was shouting at the lady in the canteen!”

“The only reason I ended up leaving Man United was I appealed a €5,000 fine. If I hadn’t appealed the fine I wouldn’t have left Man Utd - don’t be brainwashed by the propaganda and lies. It is peanuts, you get fined that for being late for training at United. I appealed because I felt I shouldn’t have been fined for speaking about a match on the club station.

“Have I stepped out of line? Damn right I have. Man United fined me about half a million pounds over my career but that is because I was sent off and I always held my hands up. Ironically when I appealed a €5,000 fine that’s when I left the club.

“I wished they played this video, it is propaganda, ‘we had to destroy it’. How do you even destroy a video? I left with my head held up high, I was fine with my actions, I always felt my intentions were to do the best for Man United.

“All the criticism I got, ‘Roy was murder in training, always pushing people’. Such a crime that isn’t it? I won’t sleep tonight. I read about the All-Blacks, the great Kilkenny hurling teams, when Munster are good - they all say the training is crazy, it’s harder than any match, that’s the way it should be. That’s always been my belief - you train how you play.

I’ve played with great players - Ryan Giggs, Paul Scholes, they never took it easy. I asked the French players what is Zidane like, a brilliant player. They said he was brilliant every day in training.

“I was as guilty as anyone, I loved craic, I loved going out. We would report on Sunday in Dublin for a match on Wednesday. Jack would pull the players together and say, ‘Look you can go for a few pints tonight’.

“Jack knew how to man-manage. I still believe that is enough recovery unless you are out all night. I was a young player. You would have played on a Saturday and I always felt if you played hard you are entitled to a few pints. Nothing wrong with that, everything in moderation. Jack would say he would like us back by 12 o’clock. This was about 4pm. I’m thinking, ‘This is fair enough, plenty of time to get steamed up, that will do me’.

“The senior players would go to Jack and say, ‘12 is an awkward time, you don’t leave the pub at quarter to 12 because usually if you’re out at 12 you’re probably going on somewhere else and only getting warmed up’.

“Jack goes, ‘Alright lads, 4 o’clock, cut-off-point’. I’m in the background thinking, ‘Happy days, I might even nip back to Cork!’ Do you think we were happy at 4? Honestly, may I drop dead, the senior players said, ‘Jack, if you’re out ‘til 4 you might have got lucky, you can’t come back at 4’. Jack [exasperated] would say, ‘Just be back in the morning!.’

“We would train at 2 on the following afternoon, all dying. If anyone came to watch Ireland train on Monday afternoon they were in for a shock - how were they going to play on Wednesday?

After training I would be back lying on my bed watching TV and Jack would be doing his press conference on RTE. He’d say, ‘I’ve never seen the players looking so sharp, training was the best I’ve seen in a long time!’. Jack was a brilliant man-manager. Come the Wednesday we would generally get the result.”

See next week for the second part where Roy discusses Saipan, Celtic and lots more