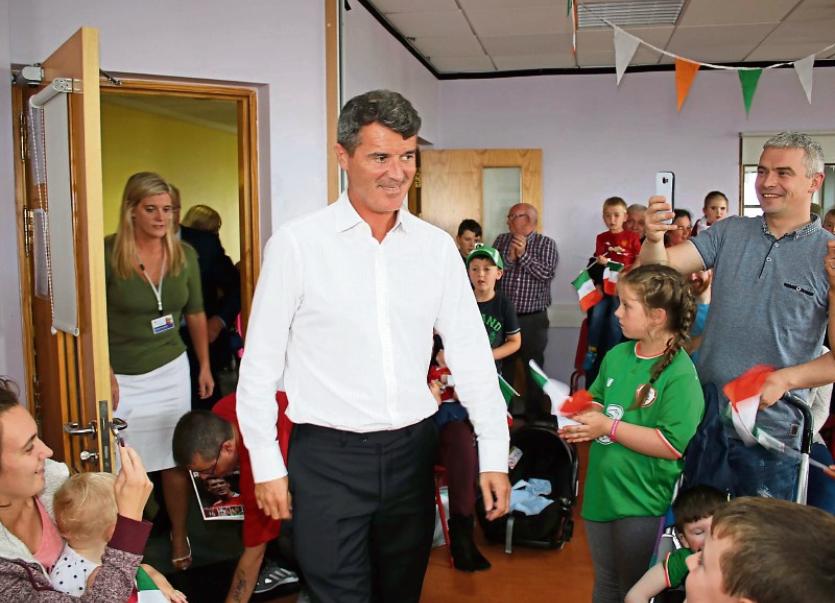 Following a visit to Newcastle West, the Republic of Ireland assistant manager travelled to the city to be welcomed by a large number of very excited children and their family members.

Children attending St Gabriel’s outpatient therapy centre and special school presented Roy with a birthday cake and sang their very own version of Ed Sheeran's Galway Girl, titled "Our Roy Keane”. The celebrations were watched by proud parents and staff.

“It was lovely, nice to visit. Obviously I've been doing one or two visits in Limerick and we popped in and it was fantastic and it seems like a brilliant organisation and its always nice to lend a bit of support.

“It's nice to support the people involved because it looks like they do fantastic work," said Roy.

“I was really looking forward to today until I saw pictures of Patrick Vieira on the wall,” laughed the former Manchester United captain.

The down-to-earth ex-player continued to joke about his well-publicised rivalry with former Arsenal star Vieira but turned his praise to the fantastic work carried out by the staff at St Gabriel's school and centre.

“I hope everyone enjoyed the visit more than Patrick's because we are still in competition,” joked Roy, “but I'm sure he enjoyed his visit as much as I did. It was lovely to be able to give our support and I got a great welcome,” he added.

Speaking after the event, Roy Keane turned his interest towards the Republic of Ireland's upcoming fixtures against Georgia and Serbia in September.

“There is a buzz with the games coming up, but we have to keep that buzz going and the way you keep it going is by winning football matches.

“The manager is going to name the provisional squad over the next few days and narrow it down after a couple of weeks but we are all looking forward to the big games and let's just hope a lot of the Irish lads get games over the next few weeks and again no injuries,” added Roy.

During Keane's visit he was shown St Gabriel's newly refurbished hydrotherapy pool after it was recently reopened following work completed to address “structural problems” in the vital facility.

After months of planning and many years of fundraising the school was also delighted to announce that building work on a new five-bedroom children’s respite centre is soon to commence.

The respite centre will be situated in an attractive setting on the grounds of Mungret Colllege, very near to where the new playground is located.

The project is being supported by the JP McManus Charitable Foundation in conjunction with community fundraising activities.

Later in the day, Roy Keane travelled east to attend the Cappamore Celtic annual awards night which ran from 7.30pm to 9pm in Hayes’ function room.

The sold out event, raised much-needed funds for development of the community field in Cappamore.

- For more, see the Limerick Leader broadsheet editions, out on Thursday