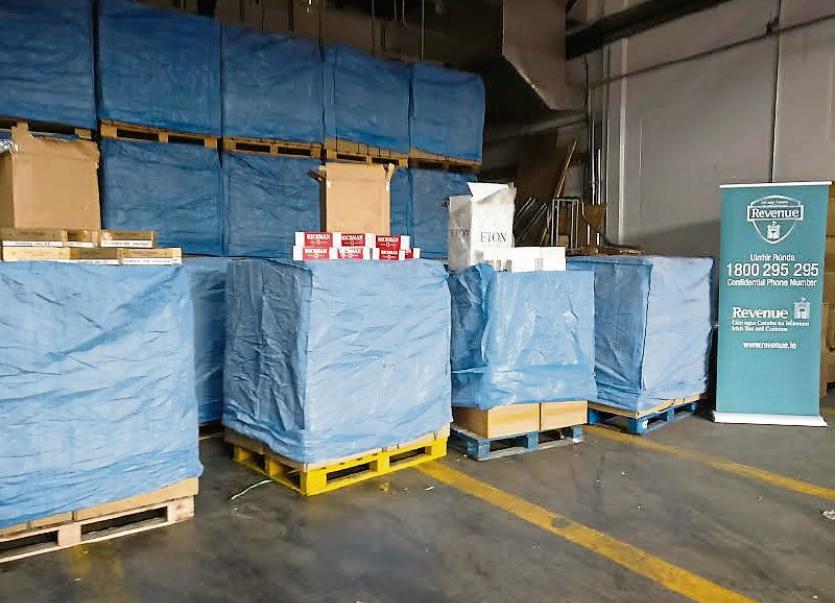 Up in smoke: The eight million contraband cigarettes, with a retail value of over €4 million, seized in east Limerick

A COUNTY Limerick man has been interviewed by customs and excise officers in relation to the seizure of 8.3 million contraband cigarettes.

The smuggled goods arrived into Dublin from China, via Rotterdam, on Tuesday, July 4. The seized cigarettes have a retail value of over €4 million, representing a potential loss to the exchequer of €2.9 million.

In an intelligence-led operation, Revenue’s mobile x-ray scanner and detector dog Grace were deployed, and the cigarettes, branded Richmond, Eton and Gold Classic, were identified in a shipping container.

The consignment was said to contain “clothing”. The truck was tracked to County Limerick and Revenue officers carried out searches under warrant of a premises.

The Revenue Commissioners’ press office declined to answer a media query from the Limerick Leader on the location of the seizure in the county and if a person has been arrested in connection with the haul.

”Investigations are continuing, with a view to prosecution and, as such, there is no further information in this regard,” said a spokesperson.

However, the Leader has learned from a source that “a man has been questioned by customs and excise officers” and the cigarettes were located in east Limerick. “The investigation is in its early stages,” said the source.

A Revenue spokesperson said enforcement action against tobacco products smuggling and other forms of fiscal fraud is a priority for Revenue and remains a key part of overall Revenue strategy to confront non-compliance.

“The illicit tobacco problem is very much a global one, driven by a number of key regions in Asia, the Middle East and Eastern Europe, where there is large-scale production of cigarettes for illicit distribution to other countries or which serve as distribution centres for illicit product,” said the spokesperson.

In response to this worldwide trend, they say Revenue remains vigilant in the face of changing patterns of smuggling activity.

“Revenue’s strategy is to target the supply of illicit tobacco products, with a view to disrupting the supply chain, seizing the illicit products and prosecuting those responsible. If you know someone is evading tax or involved in smuggling, report it. Contact Revenue’s confidential freephone 1800295295,” they said.