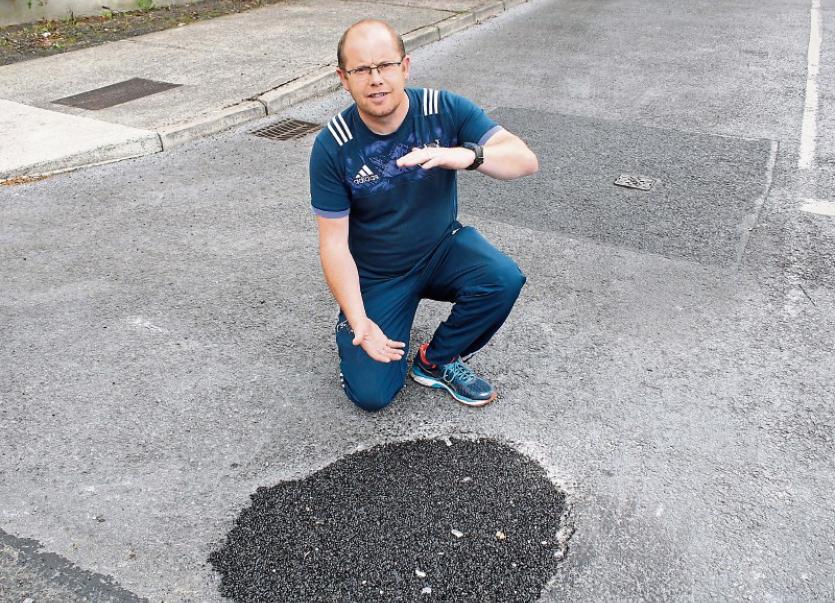 Anthony O’Donnell, at Bengal Terrace, indicating the size of the ‘sinkhole’ at the entrance of Seven Oaks, near Bengal Terrace, which has bewildered a number of local residents Picture: Michael Cowhey

CITY residents were left scratching their heads after a “foot-wide” hole appeared out of the blue after major flooding near Childers Road.

This follows the incident in Bengal Terrace, where a large water mains burst in the early hours of July 15, affecting 11 homes.

As a result, a number of families were forced into three-week emergency accommodation, while some residents are living from the upstairs of their severely-damaged homes.

Within two weeks of the flooding, a number of nearby residents noticed a section of the road, at the entrance of Seven Oaks, that was starting to cave in.

One local who alerted other residents to the opening on the road last week on social media, described it as a “sinkhole”.

Posting on Facebook, which was shared more than 70 times, the resident said: “When the water main burst a huge volume of water travelled underground and down hill toward the bottom of Bengal Terrace and onto the Childers Road.

“We now have a sinkhole measuring just over one-foot wide at the opening to Seven Oaks estate off Bengal Terrace. This is the only sink hole at the moment but the chances of another one developing or having already developed underground is very high,” he said.

Bengal Terrace resident Anthony O’Donnell, who was forced to move into emergency accommodation, said that he noticed the sinkhole appear on the road last week.

Describing the incident as “crazy”, Mr O’Donnell, who is a Private with the Defence Forces, said: “It has to be in relation to the floods. There is no other explanation for it. I am just surprised nobody fell into it and broke their leg, you know?” he told the Leader.

The hole has since been filled in by Limerick City and County Council.

Meanwhile, the emergency accommodation arrangement for the local residents, provided through Irish Water, expired at the weekend. Now, some have been told that their homes may not be ready until Christmas.

Two parents, in particular, have been forced to live separately until their home is fully restored.

Parents of a 11-week-old baby Fiadh, Niamh Counihan and Cian Healy have been forced to live separately until their home is fully restored.

Ms Counihan said: “I am not actually going near the house until I know it is going to be safe for her [baby]. I don’t know what was in that water, and I am not taking any risks.”

A spokesperson for Irish Water said that it “continues to engage directly with the affected families to offer practical support in so far as we can, the details of which remain confidential between Irish Water and the individuals concerned”.

In relation to the “sinkhole”, the spokesperson said:

“My understanding is that a hole did develop over the past few days and that Limerick County Council who have responsibility for the roads have now reinstated the road.”

The council was contacted in relation to the matter, but did not issue a statement at the time of going to print this Tuesday evening.