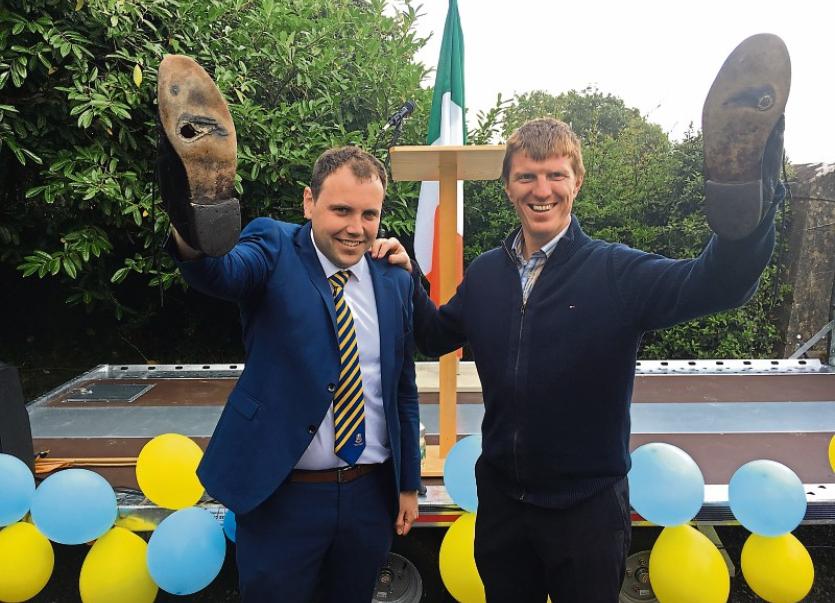 COUNCILLOR Cathal Crowe is to  seek a Fianna Fail nomination to run for the party in the next general election.

Cllr Crowe, who represents the Shannon Banks, Westbury, Parteen and Ardnacrusha areas on Clare County Council, confirmed the news at a rally in his native Meelick this Wednesday.

He received the endorsement of All-Ireland winning hurler Niall Gilligan, the most capped player in the Banner.

The councillor, a national school teacher by profession, is hoping to convince his party’s grassroots to back him in a bid for Dail Eireann – and secure a second seat for Fianna Fail in the county.

He is hoping to run alongside Timmy Dooley, and capitallise on the fact that around 6,000 people have moved into the newly redrawn Clare constituency from his heartland in the south-east.

Cllr Crowe said: “We had one-and-a-half quotas [at the last election] but only delivered one seat, whereas Fine Gael had far less votes, but delivered two seats. Mathematically, it can be done. At one point in Clare, we had three out of four seats. Now we have just one our of four. We have pushed is close on a few occasions, but I hope to be the person to win this seat.”

Cllr Crowe – who is a close political confidant of Willie O’Dea – pointed to the fact he was Clare’s top vote-getter in the 2014 local elections, topping the poll in his ward.

Currently representing the Shannon electoral area, he previously represented Clare County Council in the Killaloe area, saying that through this, he has developed close links to almost half of the Banner County.

But if he wins a place on the Fianna Fail ticket and is elected to Dail Eireann, Cllr Crowe said it it will be the first time South East Clare has had an Oireachtas member since Paddy Brennan in 1922.

“For 95 years, this corner of Clare had not had a TD they can call ‘one of their own’. I hope to put that right. I am a born-and-bred Meelick man, teach in Parteen School and absolutely love the heart and soul of South Clare. I feel at home here, I understand the issues, I know the people and I work hard to represent them,” he said.