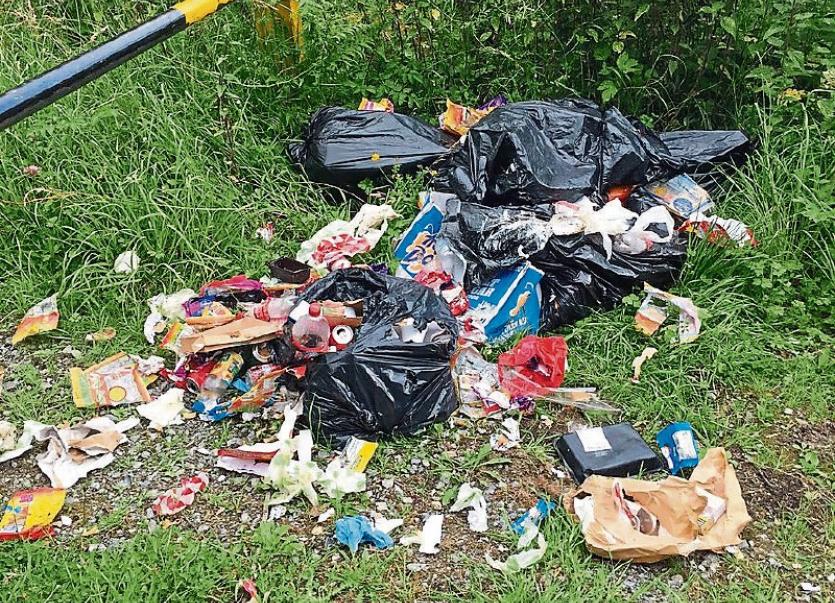 AN INTERNATIONALLY acclaimed writer and journalist returns home to County Limerick for tranquility but her most recent visit made her blood boil.

Sadhbh Walshe is a freelance journalist for the New York Times, the Guardian and the Irish Times, and has worked in film and TV in America.

“My family have lived in Murroe for nearly 30 years. I love the area and return as often as I can from New York as I find the peace and quiet and natural beauty is wonderful for my writing. So are the daily walks I take through the stunning Slieve Felim forests,” said Sadhbh.

Broken TVs and bags of household rubbish aren’t in the storyline. Two of the photographs taken by Sadhbh are 1km up the hill from Glenstal Abbey, near the main entrance to the Slieve Felim forests.

“When I encounter the trash dumps, however, to say it is a buzzkill is an underestimation. I want to get on the next plane out of here. The Limerick council should not allow a small group of people to destroy an area beloved by many.

“I'm done with the outrage at this stage, we need action and that means closed circuit cameras being installed immediately and perpetrators being prosecuted. It is unfair and unrealistic to expect locals to keep tackling this problem alone. The simple truth is that as soon as we clean up one dump, another more offensive one replaces it,” said Sadhbh.

In the same week, the Limerick Leader received a call about a dead dog thrown in a ditch in the townland of Buffanoka, Cappamore – again a popular area for walkers to enjoy Limerick’s natural beauty.

Sadhbh has set up a Twitter handle and Facebook page entitled Stop Dumping around Murroe/Glenstal. It reads: “Help us stop illegal dumping around Murroe by sending photos and any evidence of dumping sites to StopDumpingMurroe@gmail.com We will forward all complaints to Limerick Council.”

A council spokesperson told the Leader that the littering in Murroe is being investigated and the sheepdog was removed.

“It is disappointing that people still continue to litter and dump illegally. While there is a growing awareness of the importance of keeping Limerick litter free, particularly through events like Limerick Going for Gold and TLC, there is still a need to change attitudes and behaviour to recognise that when you illegally dump like this it affects everyone.

“The council will continue to heighten awareness of littering/illegal dumping, its causes and consequences and will continue to issue on-the-spot fines and pursue prosecutions,” said the spokesperson.