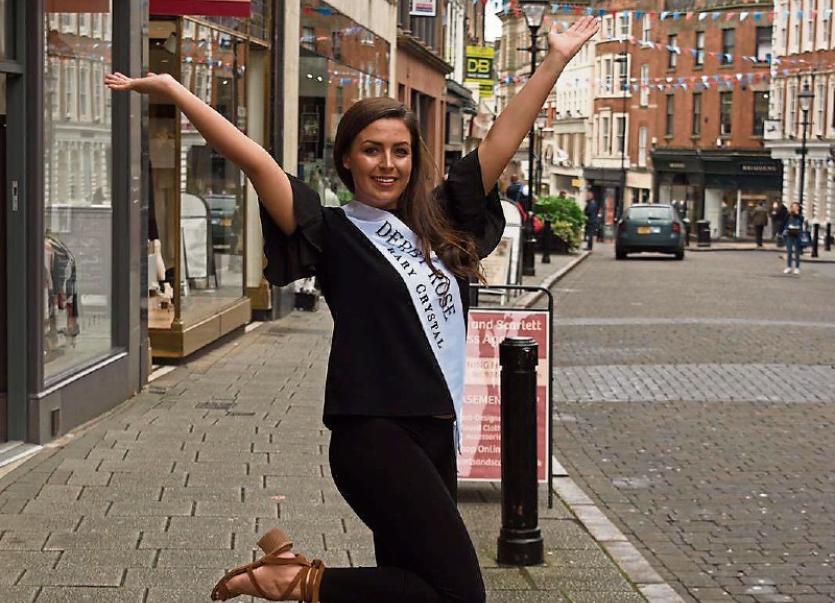 Strong Limerick roots: Derby Rose Sarah Kelly is very proud of her Pallasgreen background and will represent the parish and county with pride in Tralee

LIMERICK will have two budding Rose of Tralee winners in the famous dome this August.

Kilcornan native Kayleigh Maher was chosen at the official local selection evening and she will be joined by the Derby Rose Sarah Kelly in flying the green and white flag.

Sarah’s grandmother on her dad’s side was the late Maureen Kelly (nee Howard) of Corelish, Pallasgreen, and later Wolverhampton, England. It was Maureen’s dream that Sarah, aged 27, would enter the Rose of Tralee. Sarah, who lives in Staffordshire, even battled back from a serious car crash to fulfill her granny’s wish.

“From a young age every summer, Bank Holiday or half-term we would always go as a family back to Ireland. Pallasgreen is a home from home. Myself and my grandmother would always watch the Rose of Tralee on the telly. She wanted me to enter it,” said Sarah, one of Dermot and Ann Kelly’s four children.

Sadly, Maureen passed away 13 years ago at only 53 so she didn’t get to see her granddaughter up on stage. However, her husband Frank did see Sarah named the Derby Rose.

“My grandfather passed away last month so it was very sad. Last year, he started to get poorly and he told me to go for the Rose of Tralee so he would have something to look forward to which was nice.

Frank did get to see his granddaughter named the Derby Rose before he died.

“He said: ‘That’s great Sarah but you need to bring the crown home!’ she says with a sad smile. Travelling over to Kerry in August with mum and dad, Ann and Dermot; siblings, Aoife and Roisin [Jack is in Hong Kong] and partner Christopher is an achievement in itself.

The primary school teacher says she is “very lucky to be alive” after being involved in a car crash four years ago.

“It was a two car collision. A group of young lads pulled out on a country road - they were joyriding. Our car flew into the air, other motorists said they saw a car ‘flying’. The car rolled and rolled down the road. It was horrifc but I’m here to tell the tale,” said Sarah.

She has been diagnosed with posttraumatic stress disorder, fibromyalgia – chronic pain, broken ribs and sternum, wasn’t able to walk for a few months in work, had a minor head injury which led to slight memory loss and bad migraines.

“I am very lucky to be alive. If it wasn’t for the crash I would have applied a long time ago,” said Sarah.

She says the festival is the “biggest thing to happen to me in a long time”.

“It is joyous, it is fun, I’ll get the opportunity to meet a lot of beautiful young women from across the world, who share the same love in their heritage as I do, so I am absolutely blessed and over the moon.”