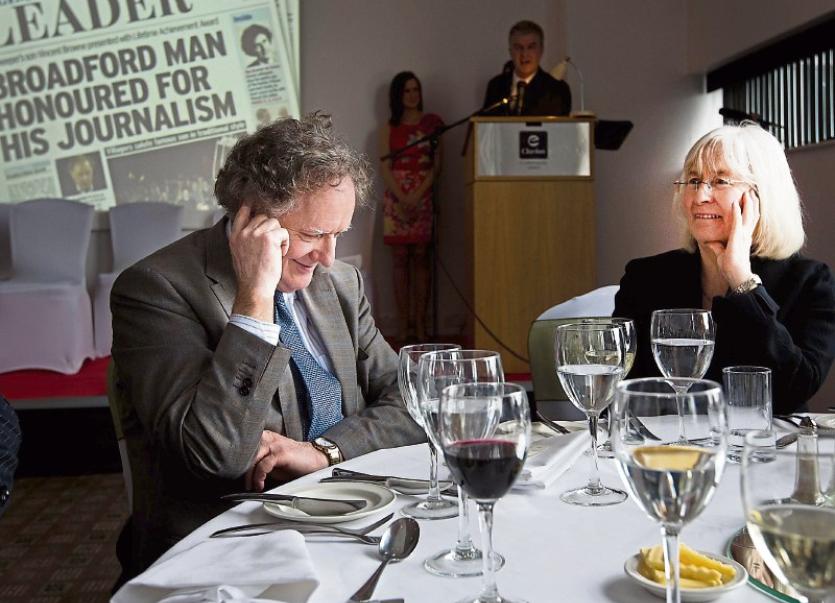 Vincent Browne and his wife Jean as he received a lifetime achievement award in Limerick in 2013 Picture: Sean Curtin

FORMER Minister for Finance Michael Noonan famously refused to go on his show, along with the then Taoiseach Enda Kenny who declined to be questioned under his “combative style”.

But politicians in broadcaster Vincent Browne’s native Limerick have paid tribute to his great journalistic career, as he retires from TV3 this Thursday.

Taoiseach Leo Varadkar appeared on the penultimate Vincent Browne Show this Wednesday night, describing his imminent last broadcast as “the end of an era.”

At the end of the broadcast, Taoiseach Varadkar said Browne has been “tough but fair, and even when you haven’t been fair I’ve always admired your integrity, and your ability to make politicians squirm.”

Fianna Fail deputy Willie O’Dea, who said he never refused to be grilled by the 73-year-old Broadford native on issues of the day, praised him as an “outstanding presenter, who is hugely entertaining, highly intelligent and extremely well-read”.

“He came on [TV3] at the start of the recession, and his style of journalism was particularly suited to that type of situation. He grilled politicians mercilessly, and people certainly enjoyed that, plus there was a certain unpredictability about the show, with some people walking off.

“People were intrigued to know what would happen and how certain people would stand up under pressure. He’ll be extremely difficult to replace because he has a unique personality and that was one of the big selling points of the show.”

Unlike interviews with other national broadcast media, where “you’d generally know what to expect,” with Browne, O’Dea said, “you’d go on with a certain feeling of apprehension.”

“It could be an easy night or an extremely difficult night. He’d a habit sometimes of latching on to a certain person on the panel for special treatment. Sometimes you’d just draw the short straw.”

He recalled on one occasion being asked by Browne about a certain report, which he was forced to admit he hadn’t read.

“He spent five minutes berating me for not having read it. He was absolutely aghast, saying 'A person in your position hasn't read this report..’”

Deputy O’Dea said of the names being mentioned for Browne’s potential successor on night-time TV, his preference is for Ivan Yates “given his knowledge of politics from the inside, and he has a great combative style as well.

As we gear up to tonight's last ever #Vinb, we're taking at look back at some of it's best moments... Enjoy! #Vinb Tonight at 11pm on TV3. pic.twitter.com/FnIkIVdu4x

His Fianna Fail colleague Niall Collins said he wishes him well in his retirement.

“He was never slow to mention his home community of Broadford and made sure the rest of Ireland knew where he came from.”

Deputy Collins said Browne “made a huge contribution to public service broadcasting in undertaking a live election debate in every constituency prior to last general election.”

Deputy Michael Noonan, however, was not a fan.

“I don’t like Vincent Browne...I think he’s a charlatan. I just don’t like the fella. Vincent Browne could be running a programme all night from the Statue of Liberty and Michael Noonan will not go on,” he previously told the Limerick Leader.

Receiving the lifetime achievement award in Limerick in 2013, Browne said he was “hugely honoured to be acknowledged by people of my own county who I have such an allegiance to and I'm deeply grateful.”