'Major issues not dealt with' at University of Limerick, says PAC 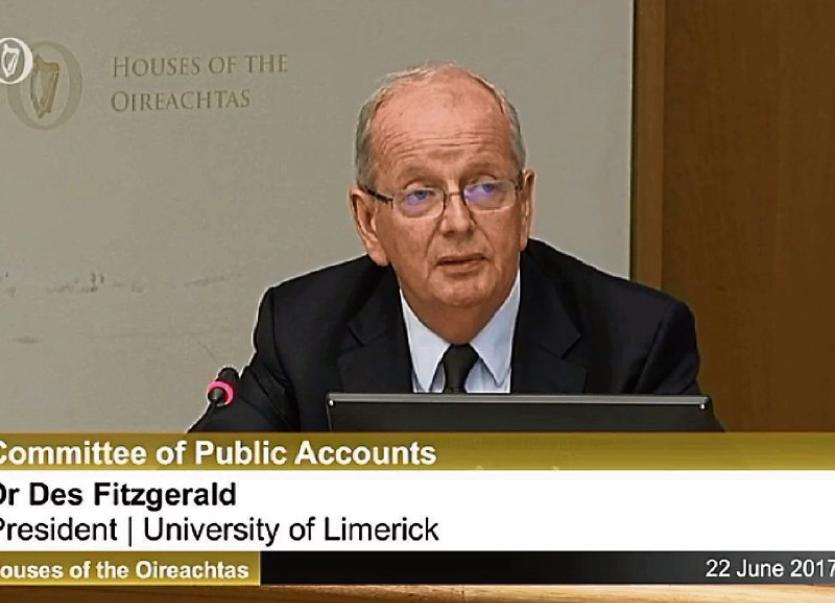 UL president Dr Des Fitzgerald, who was commended by the PAC for his support for the impending review into governance, HR and financial practices and procedures at UL

THE Public Accounts Committee has said it is “not satisfied that the substantive matters” raised at the University of Limerick have been dealt with adequately.

The committee published a 64-page report this week, following the scrutiny of spending funding across the third-level sector.

Representatives of UL appeared before the PAC twice this year, including two successive presidents, Professor Don Barry and Dr Desmond Fitzgerald, who has called for a much wider review of a series of allegations damaging UL.

The review will focus on, amongst other issues, the treatment of two women in UL’s finance department who remain suspended for two years on full pay. A third woman in the same department also brought her issues to the PAC in 2012.

The PAC said the treatment of those who made protected disclosures in relation to a number matters at UL, but predominantly in the area of finances, “has not been appropriate”.

The committee became aware of three protected disclosures in relation to financial matters at UL, particularly in relation to the processing, approval and payment of expense claims.

“The matters also refer to bullying and a hostile and potentially damaging work environment,” it noted.

“The committee remains deeply concerned that the infrastructure in place in third-level colleges may not be sufficiently strong or established to support those who make protected disclosures,” it states.

A report commissioned by the Higher Education Authority into matters at UL made 15 recommendations, 12 of which have been implemented.

Meanwhile, Dr Richard Thorn, former president of Sligo Institute of Technology, is leading the new review into allegations of misconduct at UL.

More than 20 submissions have been received, and a report is due by September. Among the issues flagged are substantial severance packages not sanctioned by the Department of Education.

The PAC noted that the Comptroller & Auditor General (C&AG) identified three severance payment cases in UL totalling €635,000 with an average value of €212,000 per case.

The PAC said that members of staff whose employment with a public body has been terminated by means of a severance payment should not be re-engaged on contract or by any other arrangement.

In exceptional circumstances where it is being considered, Departmental and/or Higher Education Authority approval should be required.

The report also states UL was non-compliant in 23 cases of procurement to the value of €888,492, while payments to those on sabbatical leave was also highlighted as a major issue.

UL amended its policy of sabbatical expenses payments after the C&AG pointed out that they may not be in compliance with Revenue rules.

UL undertook a full review which resulted in a revised sabbatical policy and a voluntary disclosure to Revenue. The eventual settlement to Revenue amounted to €184,926 which included interest of €22,819.

The committee said it is “concerned” that this issue may not be confined to UL and “it is quite possible that other third-level institutions may not be fully tax compliant in regard to their sabbatical leave arrangements.”

Accounts held from private sources by UL, under the UL Foundation, were the second highest in the State, at €15.5m, behind NUIG, which holds €57.6m. In the cases of all third-level institutions these donations were not consolidated with the accounts.

It also addressed the timeliness by institutions in the reporting of their financial accounts, with 12 months having elapsed between UL’s accounting year end and certification by the C&AG.

The committee acknowledged the support of the new president, Dr Fitzgerald, for the impending review into governance, HR and financial practices and procedures at UL.