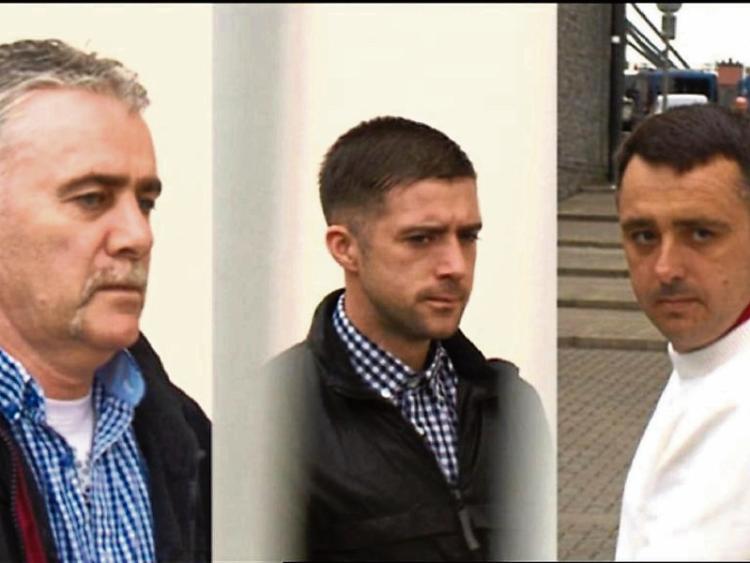 AN INMATE serving a 10-year sentence in Cork Prison has testified as a State witness in an aggravated burglary trial of three men in Co Limerick.

Limerick Circuit Court has heard that John Cahill, 33, originally from Cappamore, wrote to gardai in Limerick in March 2016 offering to help with their investigation, after he was convicted in 2014 of an aggravated burglary at Sunville House, Pallasgreen in April 2012 and one count of arson relating to a BMW car.

The jury heard that in another case he received a seven-year sentence with two years suspended, for unlawful possession of a firearm, which was imposed at Nenagh Circuit Court. The Limerick sentence is running consecutively to the Tipperary case, totalling 10 years in all.

Sergeant Mike Reidy, of Henry Street garda station, formerly of Bruff garda station, gave evidence that he received a handwritten note from the Governor’s office in Cork Prison in March 2016, stating that inmate John Cahill wished to speak to him.

Three men have pleaded not guilty to aggravated burglary and false imprisonment at Sunville House, Pallasgreen, on April 16, 2012.

Father and son Patrick, 52, and Philip Roche, 24, who both reside at Kilcronan Close, Clondalkin, Dublin, and Alan Freeman, 37, of Pearse Park, Tipperary Town, deny the charges.

Both Patrick and Philip Roche also deny further charges of aggravated burglary and false imprisonment in a separate incident at the Creed family home in Ballyluddy, Pallasgreen, on May 31, 2012.

In his evidence, Cahill told the court that some time before the aggravated burglary in Sunville House he owed €10,000 to Freeman and he later sold one vehicle on DoneDeal to help repay his debt.

Cahill testified that Freeman asked him to drive a car on the night of the Sunville case, and he was told to be at the old ESB yard in Monard, Co Tipperary, at 9pm that night.

There, he said, he met with the three accused and a fourth man.

Cahill said that he observed Patrick Roche changing the number plates on the sky-blue BMW in one of the warehouses in the yard.

He said that he also saw two sets of handcuffs, cable ties and balaclavas.

Cahill alleged that Patrick Roche was in possession of a gun and that Freeman had a screwdriver.

“I was told to wait in the car, that I’d be phoned to drive up and drive in,” he told the court in relation to the Sunville case.

Asked about the demeanour of the men after the alleged aggravated burglary, he said: “It was kind of panicked, rushed.”

Cahill said he saw Freeman pulling out a white envelope in the vehicle which had money in it - “Sterling and other foreign money,” he claimed.

Cahill said that some time later the men split between two different cars, and that he was later told by Freeman to burn the BMW.

The defence put it to Cahill that he has a large number of previous convictions, although many are for driving offences.

Cahill denied any involvement by him in the burglary in the Creed home. He said that he was “only the getaway driver” in the Sunville case because he the debt he owed.

During the aggravated burglary at Sunville House, Pallasgreen, Ann and Gerry Garvey and three of their four children were held at gun point at their home by a three-man armed and masked gang.

A second State witness has given evidence in the Creed case, after he received a suspended sentence for his involvement in that case.

William Gammell, 32, of Co Tipperary, was arrested on June 6, 2012, in relation to the aggravated burglary at the Creed family home in Ballyluddy, Pallasgreen.

On July 20, 2014, Gammell received a five-year suspended sentence for that offence.

Sergeant Reidy also gave evidence that on the morning of April 9, 2015, while he was stationed at Bruff garda station, he received a hand-written letter in his postal tray from Gammell.

He told the court that Gammell wrote that he wished to declare that he was “willing to help gardai in the Creed family case or in any investigation.”

Gammell told the court this week that he was taking to the stand because he has a “conscience”.

Following his arrest on June 6, 2012, he was interviewed on four occasions in Bruff garda station.

He denied under questioning from Blaise O'Carroll SC that his “story was rehearsed and spun to minimise his involvement.”

“The first few days I was in custody, I didn’t know what I was saying,” he told the court.

“Once I spoke to my solicitor I put things right.”

He said he had never been in a garda station before.

Gammell said if any of the accused were in possession of any weapons he did not see them.

“I didn’t terrorise the Creeds,” he added.

The court heard that the three elderly Creed siblings living in the home were left battered and “covered in blood” after two armed and masked men burst into their isolated farmhouse and robbed them.

“One of them rushed at me and knocked me to the ground,” Willie Creed, 79, told gardaí.

“He was stabbing me on the head with a screwdriver. There was blood running down along my face.”

The court heard the three pensioners were beaten, tied up, and threatened their “throats would be cut” if they didn’t hand over cash. The Creeds told gardaí the raiders were armed with a butcher’s knife, a screwdriver, sticks, and iron bars. “They asked for money and they said they knew we had three pensions and a lot of land,” Willie Creed told gardaí. “They told us they would cut our throats. One of them said he’d cut off my hands.”