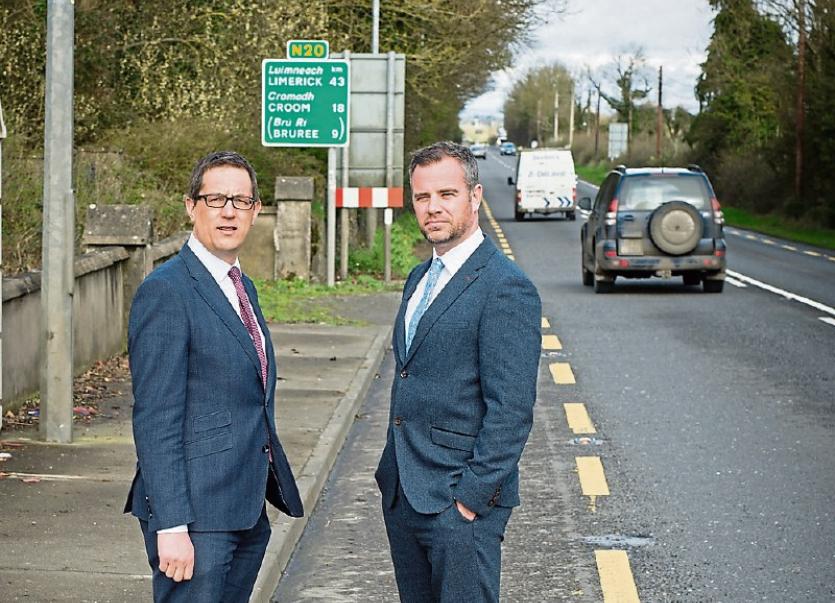 Conor Healy, CEO of Cork Chamber and James Ring of Limerick Chamber, calling for a motorway connection between the cities

A MAJOR new report has demonstrated the potential for a Limerick to Cork motorway to create thousands of new jobs for the region.

The long awaited M20 plan, which may yet form part of a capital plan to be announced by government this Wednesday according to reports, could have a “game-changing impact” if it goes ahead, a new report has found.

The Indecon/RED C report, which was commissioned by Limerick and Cork chambers, shows that the proposed 80km M20 motorway would have the potential to support an estimated additional 4,000-5,400 direct jobs in the region.

This could provide an annual gross exchequer impact of up to €128 million, depending on the nature of investment attracted, the report finds.

Other key findings in the report include that the motorway would increase the labour force within a 45 minute commute of major employment centres by 23%, it could reduce the Patrickswell to Blarney journey time by 16 minutes, prevent approximately 118 accidents per annum and underpin the competitiveness of the region.

The report has been presented to senior officials in the Departments of Public Expenditure and Reform; Transport, Tourism and Sport; as well as Jobs, Enterprise and Innovation and James Ring, CEO of Limerick Chamber, said: “The M20 is probably the most significant piece of infrastructure yet to be developed in the State.

“Current severe capacity constraints on the N20 is restricting growth potential in our second and third cities, and limits access to business and communities across Limerick, Clare, Kerry, Cork and up into Galway.

“It would effectively create a three-city region with a critical mass at a level that would redouble its capacity to win major inward investment. Two of those cities, Limerick and Galway, will have motorway/dual-carriageway connectivity by the end of this year.

“The M20 to Cork is the missing link and its delivery would be of national significance in that it would finalise that three-city corridor, benefitting not just the South West, Mid-West and West but with the ripple effect extending out into the North West, Midlands and South East.

“No other infrastructure project in the country has the capacity to impact positively on such a large swathe of the country like the M20 has.”

So far, €1m has been set aside for the delivery of early works on the major Limerick-Cork project.

According to reports, Varadkar will use some, but not all, of former Finance Minister Michael Noonan’s multi-billion euro fund on infrastructure projects.

Cllr Lynch has said that the €1bn road is “badly wanted” and that he “hopes that the powers that be will decide to invest in the project”.

He said that, if delivered, the new road would benefit the city, and could encourage businesses to invest in the city and county. He added that “it might even get Ed Sheeran to come to Limerick”.

When the Taoiseach spoke to the Limerick Leader in May, prior to his party leadership selection, he indicated that abandoned projects such as the M20 and the Dublin’s Metro, could be back on table.

The former Minister for Transport said that the proposed M20 could be delivered by 2022, and that he “absolutely envisions” the road being constructed.

“A lot of projects had to be postponed during the recession, for example, the Metro in Dublin; the M20 which is the most important project, in my view, in Munster, connecting Cork and Limerick.

“And my view is, and always was, once the Dublin Metro was re-initiated, the most important project in Munster, which is the M20, should also be reinitiated. So, I would absolutely committed to building that. You now have a link by motorway, Galway and Limerick, and it’s only common sense that we link, by motorway, Limerick and Cork.

He added: “Both for economic reasons, but also for towns like Buttevant, Charleville and so on, that are very congested. So, that will be very high on my agenda on ones that we need to get done. Now, it’s not going to get done overnight, but I think it could be done over the next five years.”

Labour TD Jan O’Sullivan also said at the time that the taoiseach “needs to ensure that the project is immediately prioritised in the capital plan review”.