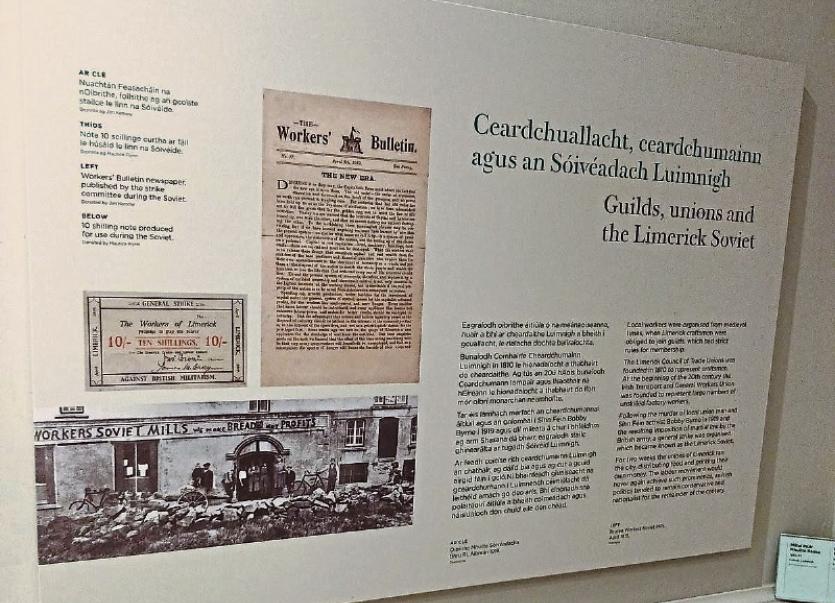 LIMERICK councillor Cian Prendiville has called on the local authority to give more prominence to an exhibit on an often-forgotten piece of history.

The Limerick Soviet, which took place between April 15 and 27 1919, saw a general strike organised by the Limerick Trades Council, as a protest against the British Army’s declaration of a special military area around the city.

The soviet ran the city for the period, printed its own money and organised the supply of food.

Yet, despite the fact that documentaries and films have been made about the two-week long lockout, and international media descended on the city for the event, it attracts very little attention locally.

Solidarity Cllr Prendiville is disappointed just one storyboard in Limerick’s new city museum at the Franciscans Church on Henry Street is dedicated to the episode.

Disappointed that this is all the Limerick Soviet gets in @LimerickMuseum originals in a box somewhere. Will have to do better for centenary pic.twitter.com/h4ronu53q7

At the time, the northside councillor raised the issue, and was assured these artefacts would be in the new museum.

“But unfortunately, it seems to have just one board on a wall and the original artefacts are not in display. It’s a shame. I think we’re missing out on something here,” he said.

He said he will raise the matter with directors, and has not ruled out bringing a motion to the next council meeting.

Responding to Cllr Prendiville on Twitter, An Taisce’s Limerick branch has also pointed out there should be a festival in two years to mark the centenary of the Soviet.

Cllr Prendiville said: “For anyone, regardless of their politics, it’s a very interesting and peculiar, forgotten part of Irish history.”