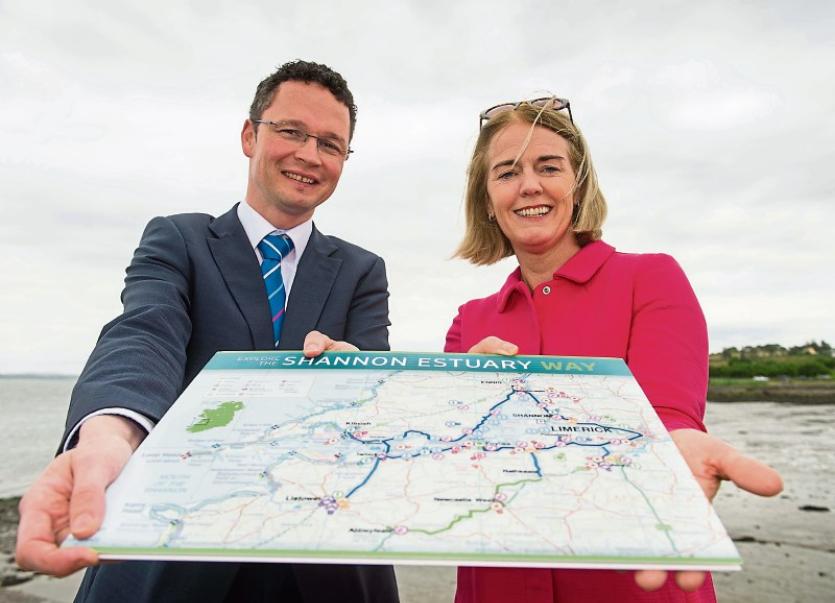 Minister of State Patrick O’Donovan along with Fiona Monaghan, launching the route

THE row over Limerick’s latest  tourist addition, the Shannon Estuary Way, continued this week as Sinn Fein’s Cllr Seighin O’Ceallaigh again took issue with with Minister of State, Patrick O’Donovan and challenged him on his remarks.

Last week, Cllr O’Ceallaigh criticised Minister O’Donovan for his “failure” to have the estuary way included as an integral part of the  Wild Atlantic Way and not simply an optional drive off it.

But Minister O’Donovan hit back arguing that Cllr O’Ceallaigh had demonstrated a very clear lack of familiarity with the Shannon Estuary and that he had received no submission from Sinn Fein on the matter.

Now Cllr  Ó Ceallaigh has said that he is “shocked”  by the minister’s claim that he had received no submissions from Sinn Féin and said he had “made  made several submissions when I met with Fáilte Ireland”.

“I don't know whether it was his poor management of the department that led to the submissions not reaching him, or if he was too busy being Leo’s Limerick Cheerleader and didn’t bother reading it,” he continued. “I think the fact that submissions were made and didn’t reach the Junior Minister is very worrying, and I will be calling for an investigation into the matter.

“I sat in a meeting with Fáilte Ireland and told them that this route is a cop out , and I recall few Fine Gael councillors attending this meeting.”

O’Donovan,  who is now Minister of State for Finance and Public Expenditure, replied, “I wish people could be less negative and a bit more positive, to be honest.”.

He had, he pointed out, made his original announcement about the Estuary Way in Askeaton last year. “I received no correspondence from him, (O’Ceallaigh),” he said, adding that Failte Ireland is a stand-alone  body, “independent of government”.

“I stand over my record as Minister of State for Tourism. Even since the article first appeared in the Limerick Leader, a number of people from the tourism and hospitality sector have contacted me saying the Estuary Way is the kind of investment they have been looking for and which they support,” he continued. And he defended other initiatives such as the 9% VAT rate for the sector which had helped maintain its 230,000-plus jobs.

“If some people are going to be negative for the sake of it, I am not going to be dragged into it. I have enough to do besides being concerned about a negative comment, a negative narrative,” he said.