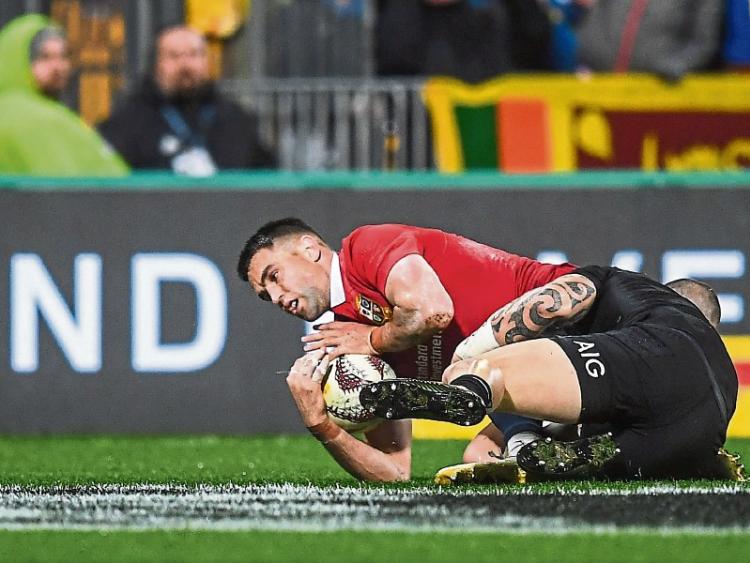 onor Murray knows where the try line is - as seen here scoring in the second test against New Zealand Picture: Stephen McCarthy/Sportsfile

WHEN CONOR Murray and his Lions teammates run out in Eden Park, Auckland on Saturday for the deciding test against the All Blacks the roar will be deafening.

Meanwhile, proud dad Gerry will be sitting quietly at home in Patrickswell in front of the TV with Freddie the dog. And that is just the way he likes it.

“He asked me if I wanted to go out but it is too long,” said Gerry.

Did the cornflakes and tea go flying when he saw his son spot a gap and dive over for his fourth try against the best team in the world?

“No, I don’t eat before matches. It was the usual big shout and I frightened the life out of the dog,” he smiled.

Gerry wasn’t aware of his son’s incredible record against the Kiwis. Conor has now become the first northern hemisphere player ever to have scored four career tries against them.

“Somebody sent me a link to that, I didn’t realise it. I think Gerry Thornley wrote that Paul O'Connell and Ronan O'Gara played against them over 10 times, and never got to beat them. It’s amazing. It’s just the way it happens you know. It was fantastic.”

Gerry overlooks his own flesh and blood for man of the match.

“It was probably the best refereed game I’d ever seen, he [Jerome Garces] was probably man of the match you know. He was brave enough to make the decisions that needed to be made.”

Gerry was just off the phone with Conor when the Leader rang him.

“He has a wedding a couple of days after he comes back and he needs a suit cleaned. That’s the story of my life - stay at home and do those things,” he laughs.

“He was just out with a few of the lads there for dinner, they were walking home and he rang me - you could hear the messing in the background. He is in good form, they had two days off and he was to do a bungee jump. He didn’t do it though as he’s taking it so seriously. I think he has done every bungee jump there is to be done!”

“I’ve had invites to watch it with people but I’ll do the same again. The players are buzzing and getting better every game but you’d just fear the All Blacks in Eden Park.

“They just have that record of not being beaten there for years and years [July 3 1994]. But the lads broke a record last week so why wouldn’t they break another one this week?

“We have the firepower, the one thing we hadn’t in the first place was a bit of luck, we just need a bit of luck and a very good referee again.”

The Patrickswell man says there is “something about the guy” when it comes to big games.

“Conor loves it and is totally relaxed going into it. People would think you are going to be flustered but he’s not.”

It’s not hard to see where Conor gets his coolness from.