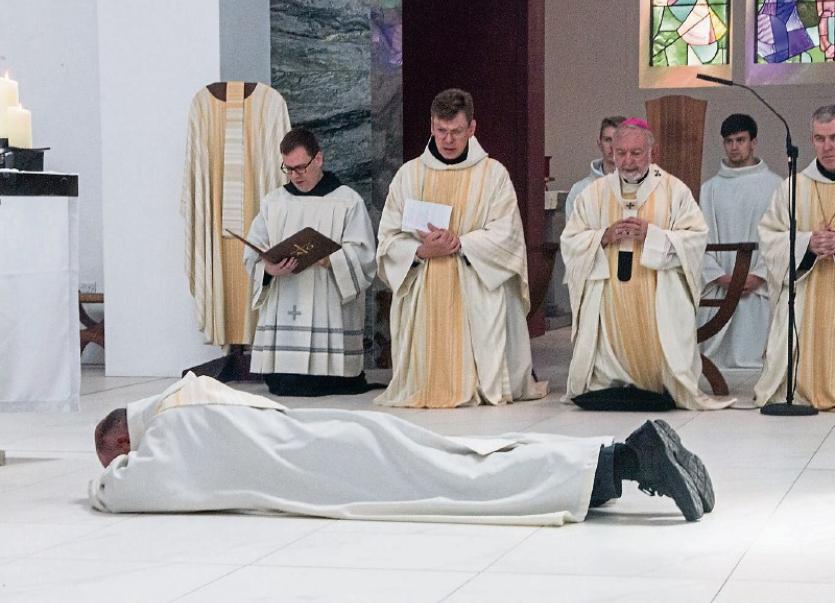 During the solemn Litany of the Saints, Br Denis Hooper lay prostrate before the altar, while everyone else knelt and invoked the help and protection of all the saints and angels Picture: Miriam Power

WHEN rugby legends Tony Ward and Moss Keane dropped Denis Hooper off at Glenstal Abbey they said they would be back to collect him in three hours.

That was in 1983. Br Denis has now become Fr Denis after he was ordained to the priesthood by Archbishop of Cashel and Emly, Kieran O’Reilly.

In his over 30 years as monk he has served in a wide variety of roles, mainly in Glenstal Abbey School, including a seven-year term as headmaster.

But aged in his early sixties he decided the time was right to become a man of the cloth.

“Over the past couple of years I felt some sort of a calling for a more active ministry. God certainly has a sense of humour. So, in consultation with former Abbot Mark Patrick and current Abbot Brendan we decided that priesthood was the logical step for me,” said Fr Denis.

“It was a wonderful couple of days here in Glenstal and people came from Australia, the United States, India, England and from all around Ireland. It was all a bit nerve-wrecking but everything turned out well without too many hitches, thank God,” he added.

Fr Denis was born in Hatch Street, Dublin in October 1954. His late parents were Dr Ivor and Margot Hooper and and there were seven children in the family.

His oldest friend is former rugby star Tony Ward who was born two days before Fr Denis. “We have been friends since the age of seven. I arrived in Glenstal in August 1983. Moss Keane and Tony Ward were driving to a Munster training session in Limerick and they gave me a lift to Glenstal.

“Moss was driving and when we arrived in Glenstal he said that he and Tony would drive back to Glenstal after training to collect me because he reckoned I wouldn't last three hours in the place!” smiled Fr Denis.

For the past academic year he has been resident at the Primatial Abbey of Sant’ Anselmo in Rome, and studying at the Pontifical University of Saint Thomas (the ‘Angelicum’) in preparation for his ordination as priest.

He had previously studied Theology at Saint Patrick’s College, Maynooth.

At the end of Mass, he administered his first blessing to the people present. The following day, Fr Denis presided at the Eucharist for the first time, at the Sunday Conventual Mass in the abbey church. Once again, many relatives and friends were present for the celebration.

Fr Denis is now looking forward to working as school chaplain in Glenstal.