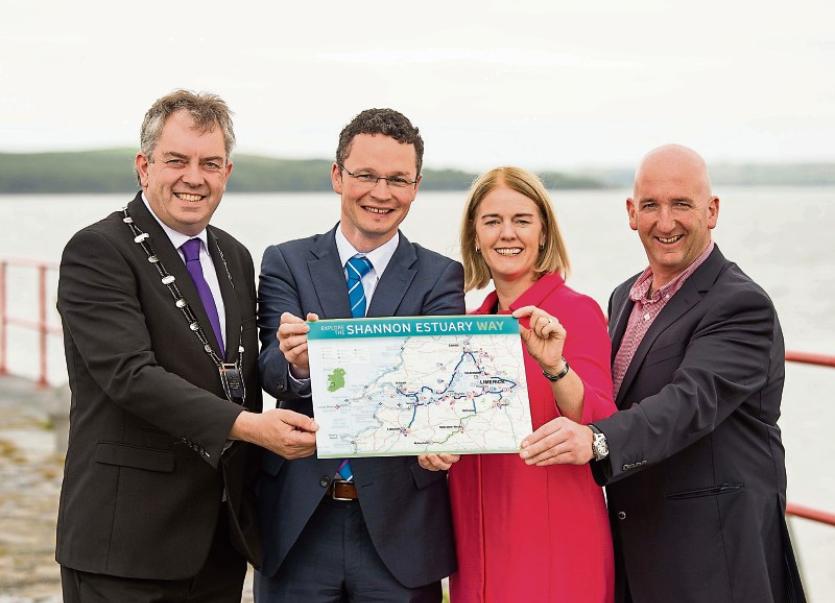 THE Shannon Estuary Way is a “cop-out” and should more properly be called “The Hedges on the  N69 Way” Sinn Fein’s Cllr Seighin O’Ceallaigh has declared, predicting that the new tourist drive would be a “disaster”.

And he has accused Minister of State Patrick O’Donovan of failing to deliver for tourism in Limerick.

“He was the Junior Minister for Tourism, and he couldn’t even get his own county on the Wild Atlantic Way. That’s a failure if ever I saw one,” Cllr O’Ceallaigh said.

But Minister O’Donovan, who launched the Shannon Estuary Way on June 16 in what was one of his last acts as Minister of State for Tourism, has vigorously rebutted  the city-based councillor’s claims and accused him of  “talking through his hat”.

“It is obvious he knows nothing about the Shannon Estuary,” Minister O’Donovan said this week, adding that there had been widespread consultation on the Shannon Estuary Way but  that he had received no submissions whatsoever on the matter from Sinn Fein.

“What Junior Minister O’Donovan has basically done is accept the Silver Medal, instead of fighting for Gold. The Shannon Estuary Way is a consolation prize, a participation medal, “ Cllr O’Ceallaigh said, claiming that he had been campaigning since 2014 for Limerick’s inclusion in the Wild Atlantic Way.

.“It doesn’t take a genius to work out that the tide comes up to Limerick City, and that it should be on the Wild Atlantic Way. The Shannon Estuary Way is going to be a disaster, for the fact it doesn’t go along the estuary.”

“They should have called it ‘The Hedges on the N69 Way’, because it doesn’t even include the scenic  parts of County Limerick,” he argued. “People won’t even see any water until they come into Limerick City.”

But Minister O’Donovan has ridiculed these remarks, pointing out that they clearly demonstrate the councillor’s  lack of familiarity with and knowledge of the estuary. It  would appear, he remarked,  that Cllr O’Ceallaigh has never been beyond Mungret.

“He should take a drive from Ringmoylan down to Foynes, down to Loughill  and on to Glin and back along the river in Askeaton. He might understand you do see the water. He would get an even better view from the top of Knockpatrick but he would need sat-nav to get there, “ Minister O’Donovan said, adding that a tour could be arranged to show Cllr O’Ceallaigh the sites in Co Limerick that he doesn’t know about.  “We can arrange a tour for him.”

Sinn Fein’s only contribution to the tourism debate, Minister O’Donovan said, had been to call for the abolition of the 9% VAT rate for hotels and restaurants, a move which, he believed, would have led to lost jobs.