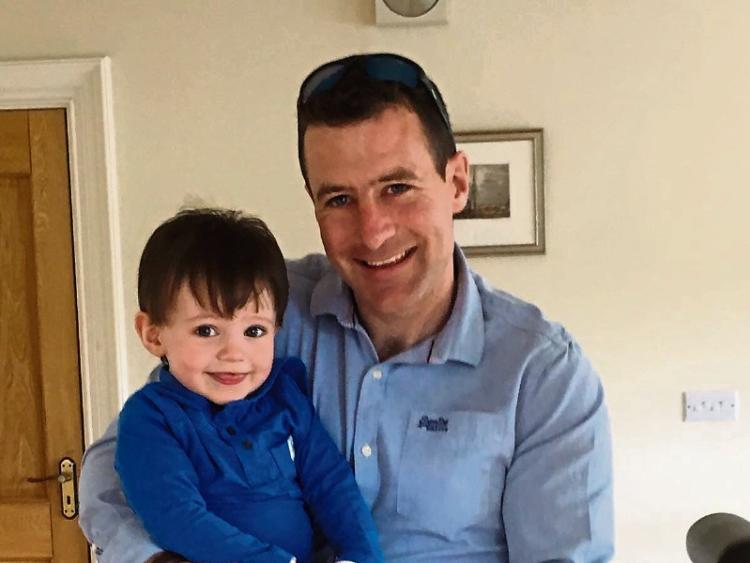 Proud heritage: All-Star hurler Andrew O’Shaughnessy who enjoyed many great days in the green and white pictured with his son Fionn, 22 months

AS the Limerick hurlers go to war with Kilkenny this Saturday, having a sharpshooting army man from Kilmallock on the field of battle would certainly give supporters extra hope for their side pulling off a “Shaugh”.

It’s six years since Kilmallock man Andrew O’Shaughnessy stepped away from intercounty hurling having made his full senior championship debut for Limerick aged 17, only days before he sat his Leaving Certificate in 2003.

“I was more nervous about the Leaving Cert than I was about the match.  It was just another game. I would never really get nervous playing hurling,” smiled the All-Star hurler who became a household name in his home parish at just the age of 11 when he played in the All-Ireland Feile na nGael hurling final against James Stephens of Kilkenny. A future Kilkenny star, Jackie Tyrrell, was also playing that day.

Remarkably, Andrew was just a tender seven years of age when he played his first game for Kilmallock, in the U12 South Championship. His father Tony had to help him to get togged out, as tying his own laces at seven proved to be the toughest job of the day.

Since then, Andrew has won an impressive list of medals with his club including three county minor hurling titles, one county U21 title, three county senior titles in 2010, 2012 and 2014 and one Munster club championship in 2014.

With his county he has two Munster U21 championship medals and two U21 All-Ireland medals.

And, from his colleges hurling days at secondary school level he amassed three Harty Cup medals with St Colman’s College in Fermoy as well as two All-Irelands.

With Limerick venturing into the lion’s den that is Nowlan Park, Andrew feels that “in sense there won’t be any pressure on them because everyone else will have them written off already.

“And that’s a nice position to be in,” he adds, “and one in which they should play at their best - whether they do or not is another thing - I hope they do.”

With intercounty players, and indeed managers, investing an increasing amount of time to the game -  Wexford star Lee Chin is now dedicating himself full-time to hurling as well as Waterford hurling manager Derek McGrath -  does Andrew like the way the game is going in terms of semi-professionalism?

“I can’t say I do,” he responded. “I don’t like the amount of time that is being dedicated.

“Dedication is good and if you are playing a sport you are going to be committed. There wouldn’t be much of a difference for me because I enjoyed it.

“The one thing that’s probably missing at times now is the enjoyment because they are all playing systems and what not.”

When asked who is the hurler he most admired, the two letters, DJ, automatically roll off his tongue.

“I loved the grace he had,” he followed up of Kilkenny legend DJ Carey.

“He was always an elegant hurler. He always seemed to do the right thing on the ball.”

In 2009 Andrew was diagnosed with MS. Thankfully, the condition hasn’t affected his lifestyle to any great extent.

The father-of-one, who is married to Eimear Curtin from Tournafulla, is a captain with the Irish Defence Forces and is currently on a course for promotion to the rank of commandant.

The couple are looking forward to welcoming a brother or sister for young Fionn who is 22 months, in the autumn.

Looking to the future, Andrew says coaching is “most definitely” something he is interested in pursuing.

“I would be very interested in that. I just didn’t have the time this year because I am away with work and up the country for six months. There is no point committing to a team if you are not going to give them your full commitment.”