#LiveableLimerick: O'Connell Street plan must 'put the fun' before functional

In his latest article, John Moran argues the city can be one of 'inclusion and vibrancy' 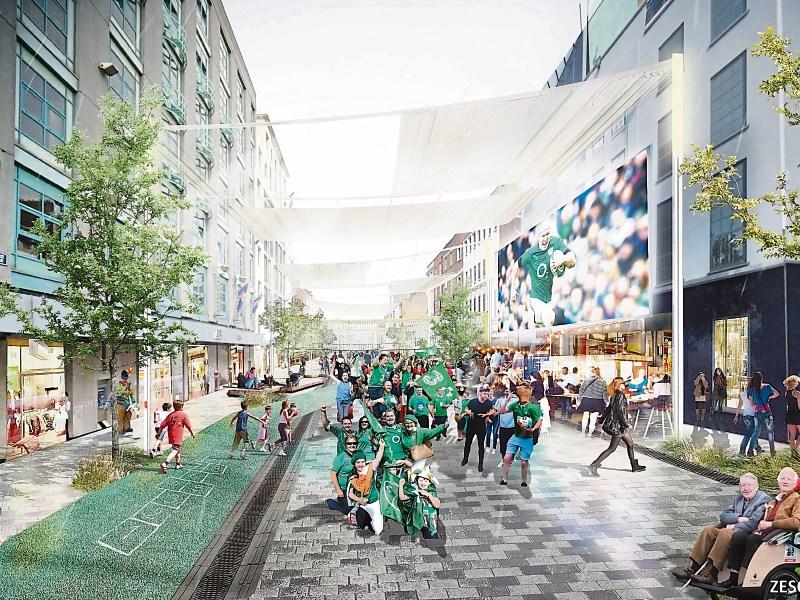 The Sports Block: Think penalty shoot-outs, volley-ball games or rowing machines, sports matches on a big screen or an inner-city workout space in this design by Zeso Architects

LAST week, #LiveableLimerick trended on Twitter as it exploded with ideas and ambition for our city and O’Connell Street.

The consensus. We can do better. But how?

The #Liveablelimerick team put on their thinking hats with architects from Limerick and Copenhagen. Our revised proposal puts people before cars, “fun” before “functional”, ambition before safe choices.

Not a compromise with a little for everyone. Instead, an ambitious plan for the common good not pre-existing privileges of a few. An innovative solution differentiating Limerick as one of Europe’s cool metropoles.

The #liveablelimerick campaign has been a joy to watch. A superb example of civic engagement. Whatever the result we should be a proud city pic.twitter.com/oOCMVLszSa

A a big thanks to @Limerick_Leader for promoting the campaign. Highlighting increasing public expectations for our city. #LiveableLimerick

Open letter to Limerick city council by @moranjohna1 signed by us. #LiveableLimerick If you're looking for a ride I've a bike outside pic.twitter.com/VWjxBt5b84

Shared space telling the narrative of the city

We see open shared space, plenty of seating and plenty of greenery. But it needs more than granite and some trees to be liveable:

(A) We see a vibrant retail quarter much as proposed but without a river of passing cars cutting it in two. Access of course “lent” to vehicles on an as-needs basis only.

(B) Next a bustling food/ entertainment quarter, a line of open-air terraced restaurants along the middle – protected of course from the beating Limerick sun! Not too different yet.

But beginning with Roches Street, radically different, telling a new narrative for our city.

Reduction in through-traffic made possible by a new Movement Plan opens up an exciting world of opportunities.

Instead of two lanes of traffic, buses and bikes, we see five shared-space blocks with seating, gardens and facilities given for use to the communities which inspired them.

Permanently unimpeded passageways, one wide enough for cars and ambulances and a second specially demarked for the visually impaired wind separately to the Crescent.But we see street markings reflecting people not car use only.

Imagine we have, marked on the “vehicle” pathway, a four lane 100 metres running track on the surface with the finishing line under the eyes of Daniel O’Connell. A grand finale for the Great Limerick Run. A “must do” when you come to Limerick. A daily best score (by age), a best of the year score to beat. Log in to add your race time and we’ll send you push notifications during your time in the city of all the best that Limerick has to offer.

A real facilitator of our new digital living city. And we’ll have lots to tell you about too in our active city.

Because, we now imagine five vibrant blocks telling the story of Limerick: 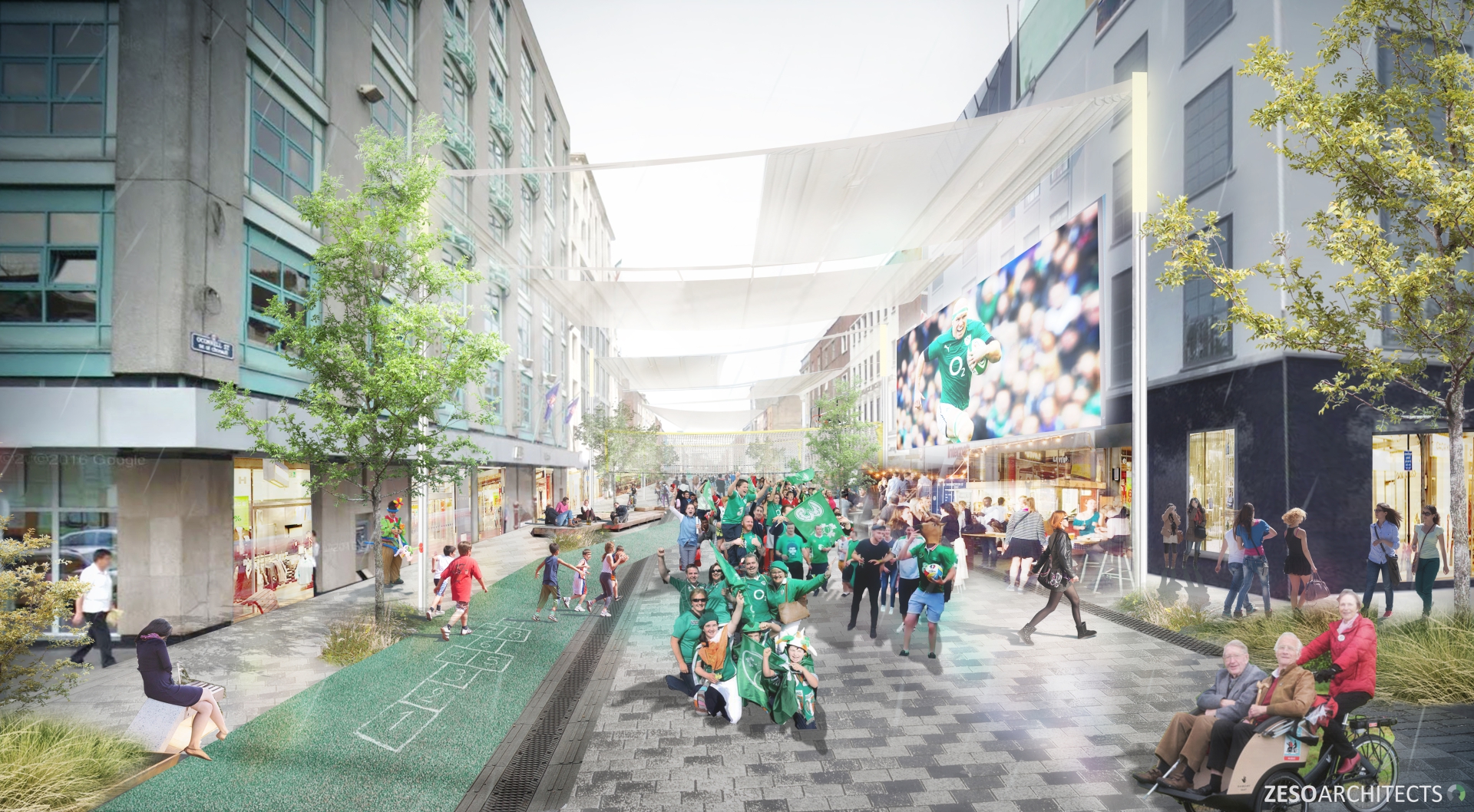 In front of AIB, animated by our own sports clubs under a rain-proof shelter. Think penalty shoot-outs with teams randomly drawn from representatives of Limerick’s diverse communities.

Think volley-ball or rowing machines for everyone. Think sports games on a big screen or an inner-city workout space for those who cannot afford memberships of Sky Sports or gyms.

Modern glassed pavilions showcasing to visitors the best of Limerick creativity and design. Open-days to explain to young citizens and visitors why Limerick is best for IT, entrepreneurship, creativity.

More gardens, open seating and more pavilions to showcase all our diversity and communities and the great work being done there. Imagine, international cuisine days or Narrative 4 storytelling from diverse traditions. Imagine evenings of free introductory language classes to learn how to speak to your newly arrived neighbour. 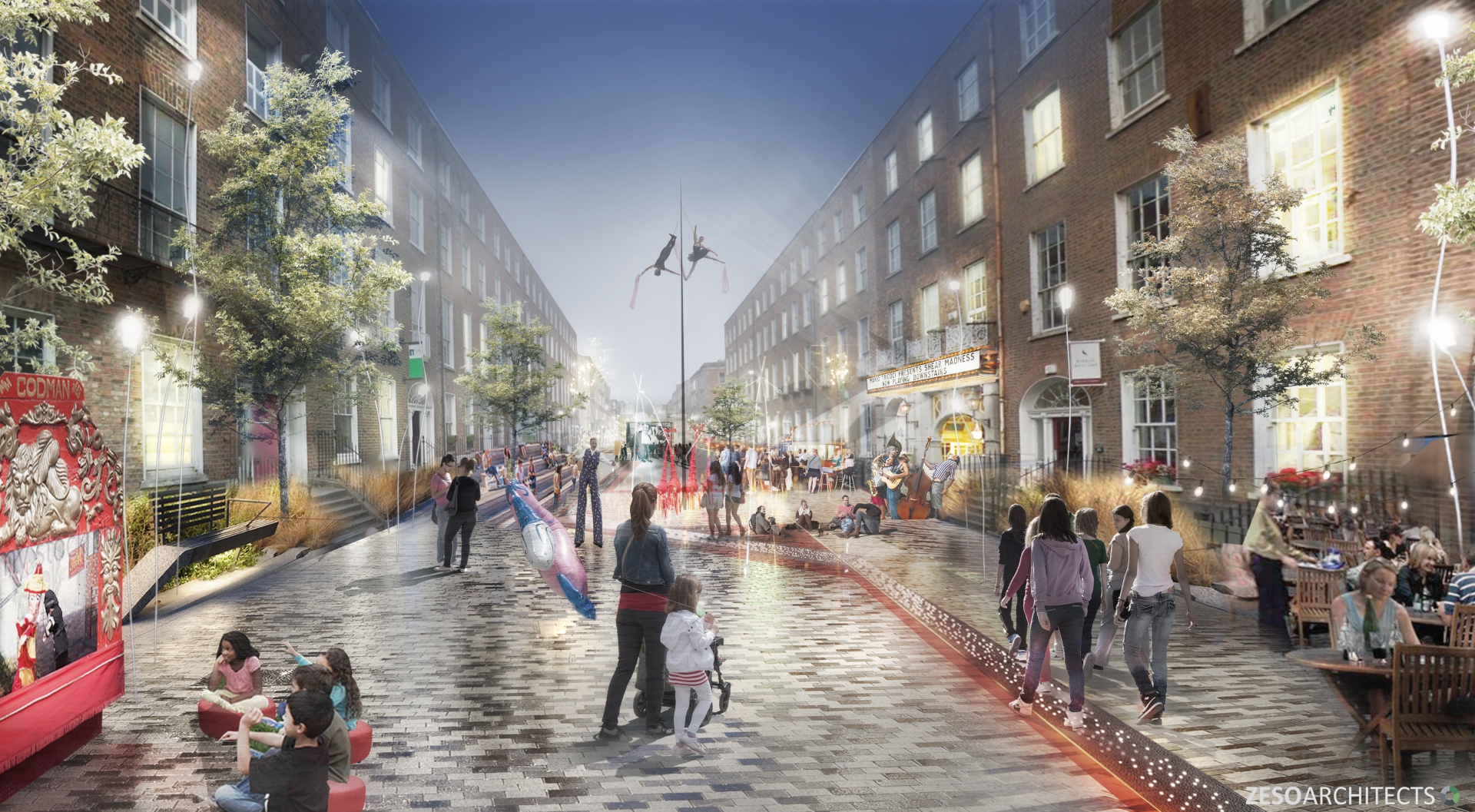 An outdoor animation space. Open-air performances outside our own gem, the Belltable.

A big screen covered from the rain – finally a downtown cinema! A Punch and Judy kiosk. A stand for Limerick rap or traditional Irish musicians. Another pavilion housing a coffee shop selling tickets and giving information on all events in the city – our own improved “TKTS”. 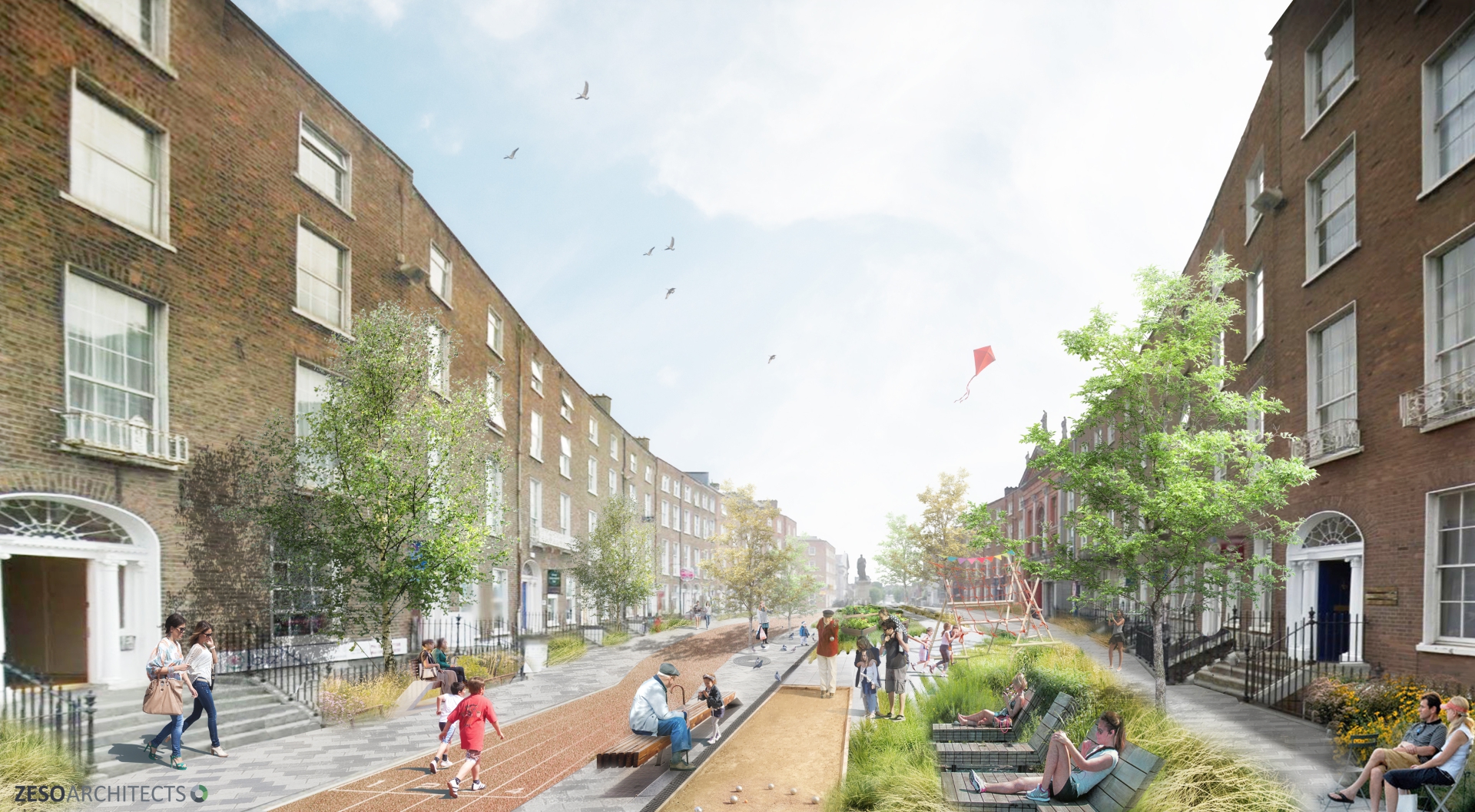 A more restful open urban playground. Petanque, table tennis, a sensory playground and games for kids (and the not-so-young).

Tables for grandparents to play chess or cards with grandkids or friends. Free wifi of course while sun-bathing! Perhaps other pavilions available to throw a kid’s birthday party when your nearby apartment is too small.

All possible in the square metres, available for free, now that cars go around this central block.

These hundreds of square metres belong to us already – no CPO is required. Our design is, mostly, a reconfigured space marked out for fun, not for vehicles. Lent occasionally back but with a design to make them guilty that they are driving over our urban playground.

The selfish desire for personal accommodation nudged in the direction of the common good.

And even if it should cost more, a mere 10% rise in the Limerick2030 portfolio value driven by investor excitement for our new city would finance €50 million for it. So what’s different about our thought process?

The council’s stated vision “improving the attractiveness of O’Connell Street for retail and commercial” emphasises the demands of business. Our design puts the common good and liveability first, while acknowledging the key role of a vibrant business. That is why we welcome the improvements in the retail section but go much further.

Few want 100% pedestrianisation and #LiveableLimerick certainly does not. Access is retained for residents, mobility impaired, emergencies or drop-off of supplies or furniture.

The privilege of a minority to use the street as a short-cut must however be secondary to those who live in the Georgian quarter, those visit or work and walk around our city, those who cycle but most importantly those many citizens for whom a car is simply a luxury they can never afford.

Unless the common good requires it until other solutions can be implemented, cars short-cutting across or along the street should be avoided where possible.

Equality of opportunity requires that cars cannot be the fastest or privileged way around our city. Limerick is a city of inclusion, of community, of vibrancy.

It is now time for our councillors to show us what they mean by acting for the common good. Not just #LiveableLimerick but the whole world is watching.

- John Moran is former secretary general of the Department of Finance, a social entrepreneur and chair of the Hunt Museum

A little over 50 years ago, Copenhagen had a very heated public discussion, along the same lines as the issues being discussed in Limerick over the last few weeks, writes Mick Bradley.

Similarly to O’Connell Street, a key centrally placed commercial street Strøget - in the heart of old Copenhagen - was being considered as a possible first trial for a pedestrian shared space.

A vision for the street – and for the city -had a “people first” pedestrian zone in the heart of the existing urban fabric. The idea was highly controversial and the local shops and businesses argued strongly that the restrictions on traffic would scare away business, and that the area would be a ghetto for antisocial behavior. What an irony then, that now some half a century later, the same shops enjoy Copenhagen’s most sought after retail space. 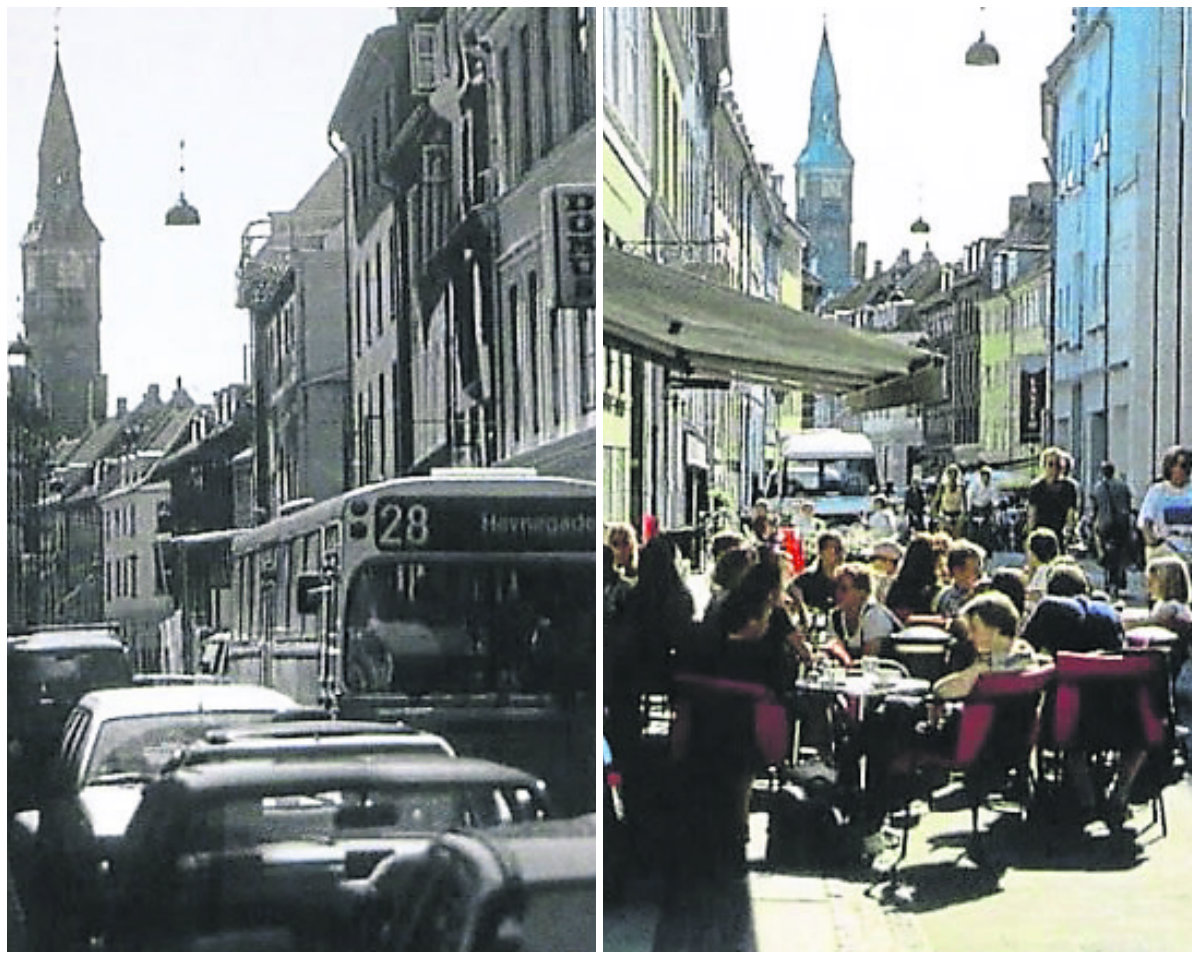 The project quickly proved a success and now no visit is complete to Denmark without a visit to Copenhagen’s bustling urban heart. This people first approach, has in turn become internationally influential – and a key part in the export of Danish “liveability” around the globe.

Copenhagen has the eyes of the world looking at how successful a “people first” approach can be - urban spaces thrive, people are happier, businesses grow, and cities become real players in attracting global talent and foreign investment.

The same mechanism can be used to boost Limerick’s identity on a global scale. An inspired city, putting people first across the board – which is the key to Copenhagen’s success – something that will make the world take notice and want to visit. Dream of the “impossible” Limerick - and then make it work.

Mick Bradley, a partner and part-owner at ZESO Architects, is an award winning Copenhagen-based architect