Plus open letter goes out to councillors on O'Connell Street 'reimagining' 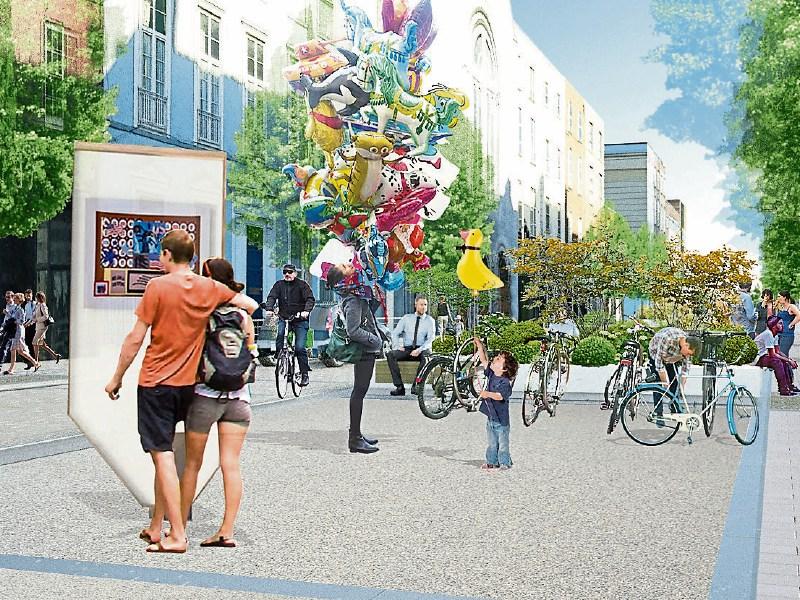 One of the council's architechtural rendering of the O'Connell Street redesign

THE Limerick Chamber is to lobby Irish Rail to open suburban stations on existing track around the city.

It comes after plans to transform O’Connell Street revealed by the council showed a reduction to one lane of traffic on the main thoroughfare.

Chamber chief executive Dr James Ring said, having spoken to members, with up to 5,000 extra staff likely to come into the city centre under the Limerick 2030 plan, alternative solutions are needed to avoid “gridlock”.

“At this moment in time, we just cannot take this traffic. It means alternatives to people driving must be looked at. One way is providing more city centre accommodation. But what we want to see is much better public transport,” he said.

“The buses are very unreliable, effectively all you have is a train to Dublin and Ennis every so often. If we got cars off the road and had a reliable bus service, people would be more inclined to use them,” he said.

However, he believes trains can also come to the rescue of commuters, with new stations being built on underused lines across the city.

Along the Limerick-Ballybrophy line – which already serves Castleconnell – halts could open at Annacotty and Castletroy, he suggested.

A park-and-ride facility could open at Mungret on the old Limerick Foynes line, while the Limerick-Ennis line could serve both Corbally and Moyross.

And a stop could be provided on the Limerick – Limerick Junction line at Southill, he suggested.

“If we don’t do this, we will end up almost as bad as Dublin and Galway withj no-one getting anywhere in a hurry. That’s not what we want for this city,” Dr Ring cautioned.

Separately, a call has gone out to Limerick councillors to “be bold” when it comes to looking at changing O’Connell Street.

The council’s plans, unveiled last week, were met with a muted response, with many people feeling they did not go far enough.

Now, social entrepreneur and former secretary general at the Department of Finance John Moran, the Rubberbandits and award-winning Copenhagen-based architect Mick Bradley have written an open letter to members who will ultimately sign off on the €9m plans.

“We must do better than this,” the letter states, “the city which dreamt in the 1800s and through public petition defied the experts to have its way and build a towering home for the Bells of Alphonsus cannot be so average.”

The letter – tying in with updated proposals from the social entrepreneur writing in the Limerick Leader this weekend – goes on to refer to Patrick and John Collison, who have enjoyed towering success in the Silicon Valley and John Holland, who designed the submarine.

“Two Limerick lads have built a billion dollar company before they reached the age of Christ – and are still reaching further the skies. A Limerick schoolkid dreamed of a submarine and made it a reality. Well we say to you Limerick councillors – please continue to dream too”.

Open letter to Limerick city council by @moranjohna1 signed by us. #LiveableLimerick If you're looking for a ride I've a bike outside pic.twitter.com/VWjxBt5b84

“Demand everything you can dream of – become Europe’s new coolest metropol. A main street without cars and buses driving through it and people playing on its paved surfaces doesn’t seem like such a big deal after that now does it,” it adds.