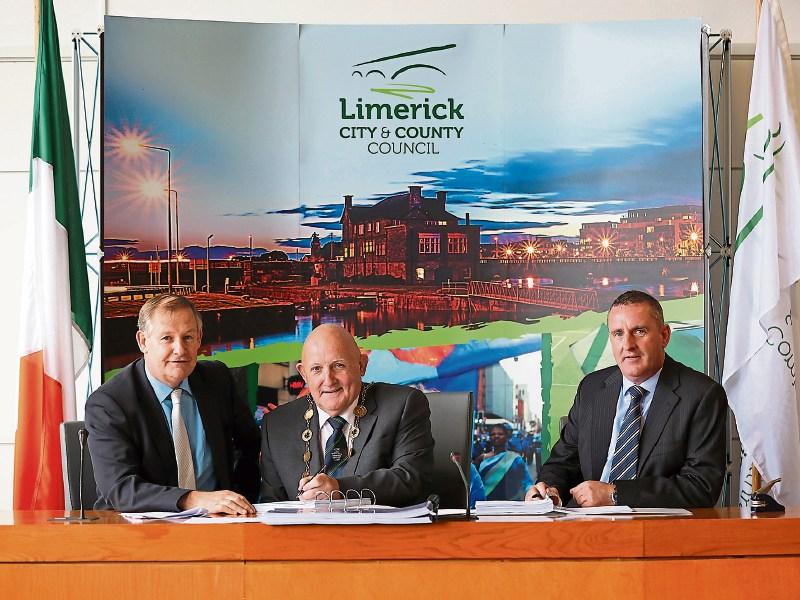 THE FIRST phase of the €40m Coonagh-Knockalisheen Road is to commence in August, after Limerick City and County Council officially signed a deal with construction company P&D Lydon Plant Hire.

The development, costing in the region of €7m, marks the start of the most expensive individual Regeneration project, which forms part of the Northern Distributor Road.

When completed, it will provide a significant road link to Moyross, providing a 3km urban style dual carriageway between Coonagh Roundabout and Knockalisheen Road.

Council director of economic development, Dr Pat Daly said at the contract signing that this “provides another piece of Limerick’s vital infrastructure jigsaw.

“It will enable improved and essential connectivity to areas of the northside of the city, which will allow investments to be made in local communities. The Coonagh to Knockalisheen Road is a key factor in our emerging competitiveness when it comes to attracting investment,” he said.

Carmel Kirby, council director of social development, said that this project was seen as “crucial in unlocking the potential for the northside of the city” since Regeneration began in 2007.

“This is of vital importance for the community of Moyross, as it opens up the area for future development,” she added.

Welcoming the announcement, former Mayor of Limerick, Cllr Kieran O’Hanlon said: “A lot of preparatory work has taken place to get the area ready for construction work.  It’s another example of Limerick putting the vital infrastructure in place to meet the growing needs of our citizens as well as an important marker for businesses looking to invest.”

Declan Lydon, managing director of P&D Lydon, said that they were “delighted” to be constructing “this very exciting and important project for Limerick”.

Funded by the Department of Transport, the construction of the Coonagh-Knockalisheen Road is expected to take up to 18 months.