#LiveableLimerick: O'Connell Street can be a new living spine for an ambitious city

As the council gears up to unveil a preferred design for a 're-imagining' of the main thoroughfare, John Moran hopes that liveable space is the planners' priority 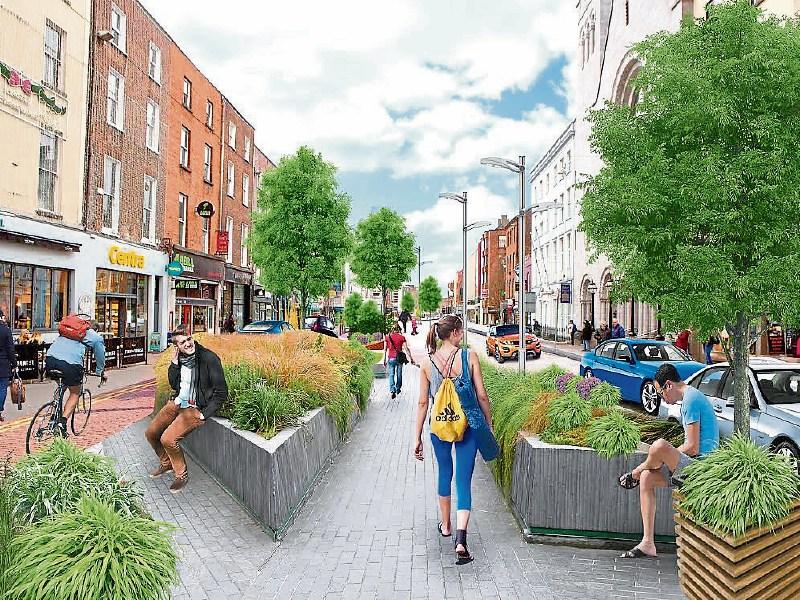 An artist’s impression - by Conor Buckley - of how John Moran argues O'Connell Street could look under the redesign - below, an early council image of an option for the street’s redesign

LAST January, I wrote in this paper about the redesign of O’Connell Street, sharing the thoughts of a group of friends, architects, business people and residents, along with visuals of what our main street might become.

I hope others have also spoken up to explain the future they want and that the design teams have been listening. We draw nearer to the moment of truth. Next Tuesday, the results of recent consultations will be revealed.

We will see what those developing the new design believe a modern best-in-class design for a main street looks like for our city. Our politicians must now have the courage to demand a sufficiently ambitious plan in choosing the future main street of a city brimming in confidence about to double in size.

This time, pleasing everyone is not likely the right option.

We hope they will put liveability first, access second and only then long-term solutions for traffic management for people transiting from one side to another of what should be our urban playground? We believe this can be a #LiveableLimerick moment for the city.

The principles we believed should form part of the public debate with its three zones were detailed in the earlier article, but the idea was that each would overlap with each other, but with a newly inspired feel and incorporating a core retail zone around the Bedford Row-Thomas Street area, an entertainment zone approaching Roches Street and a historic, residential zone from Cecil Street to the Crescent.

During our own interactions with the design team (for which we are most grateful) we agreed on many things. Renowned architect Nick de Jong showed us best in class case-studies from Las Ramblas in Barcelona, a shared street example from London. We also talked about other continental European cities where, like at our own Crescent Shopping Centre, people travelled in cars or public transport to the edge, then walk to the shops and play areas in the centre. We were filled with hope and optimism that we would see these reflected in Limerick.

Sadly, I cannot attend Tuesday’s unveiling. Ironically, I shall be visiting Copenhagen and Aarhus two great models of what can be done to transform city streets, glued to my twitter to see Limerick raise its game to match these best practices.

I shall particularly be watching to see what has been concluded about two distinct items.

The earlier design options show at least one line of vehicular traffic cutting across one side of this majestic and symmetrical space.

We instead imagined a delightful public “square” at the Crescent, like those comfortably sized public space squares you come across all over other European cities. A resting space for urban inhabitants of or visitors to our Georgian quarter with play amenities for the local kids or flexible space permitting street fairs like we saw during the Limerick 2020 bid street festival.

(b) The Shape of O’Connell Street

The earlier options all show at least two clear lanes in the middle of O’Connell Street reserved for vehicular traffic, public transit or perhaps in areas pedestrians. Footpaths are widened out to meet those central lanes with the extra side space used for seating, low level planting and for parking. Five options with the same core idea – we began to call them options 1 (A) – 1 (E). 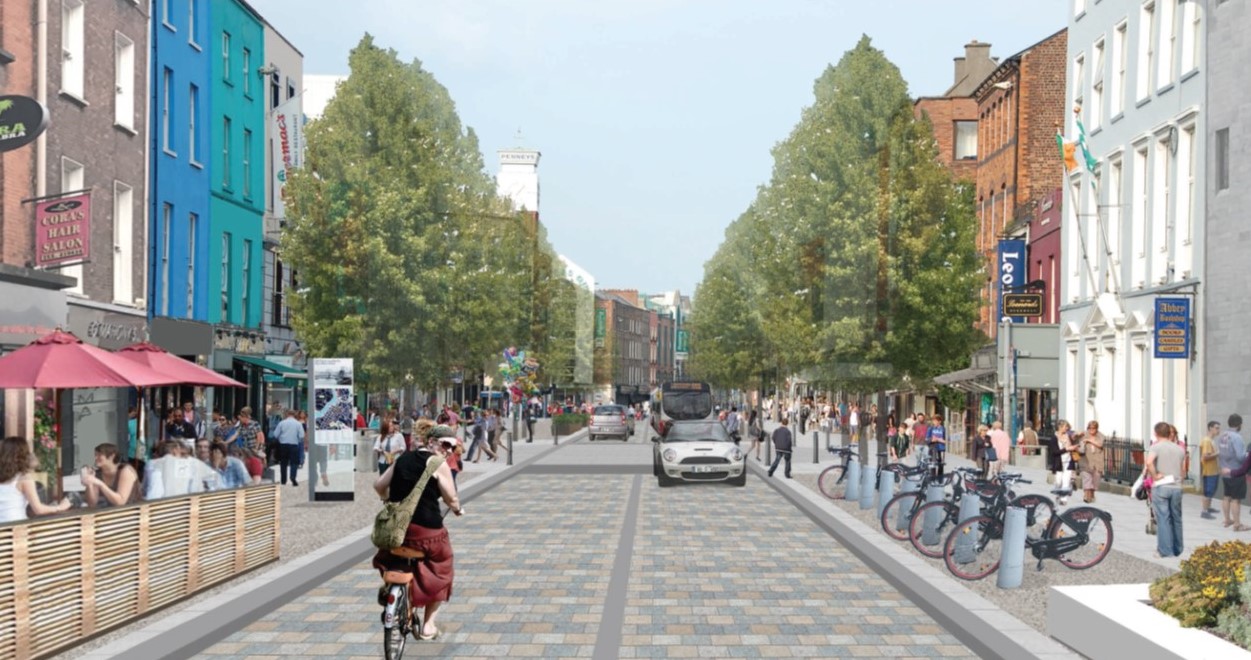 We rather saw things differently. A clearly different option 2, where people came first - not cars or buses. Inspired by spaces like Las Ramblas, the centre two laneways are used for a non-vehicular space. A sort of linear public park running all the way along the centre clearly designating our main street as different to others in our city.

Of course, two separated lanes for traffic could still be fitted in if required –where the cars park today while yet keeping existing footpaths for shopping or walking by Georgian railings. Removal of street signage means access for emergency vehicles could importantly still be ensured.

Option 1(B) – people to the side please!

We imagined joggers or workers and families strolling down the middle, ponds, trees, birds, flowers or kids playing perhaps on swings along the way, or even street performers and funky seating and artwork.

Cars or buses moving slowly on space on either side shared with pedestrians, cyclists and scooters. We shared videos of similar living in other European cities and imagined that in our own city. Our excitement grew. Now that would be a different, modern facing Limerick.

What a contrast with what we feared might otherwise end up looking like a street enhanced, using principles like those which guided the refurbishment of William Street, during an era when best urban design concepts were very different for sustainable urban living. When jobs and people were fleeing our central city not moving back into it.

In truth, we should not be afraid to change if our city deserves a new approach – our city has transformed and become best-in-class in so many other positive ways since the early 2000s. It is now time for our public realm to strive to catch up with its new confidence.

Liveability is no passing trend in urban planning for 21st Century cities. Limerick and its people deserve the best.

#liveablelimerick Limerick needs to move forward on this global trend: younger professionals want to live and work in city centres.

Could you imagine O'Connell Street ever looking or feeling like this? Nothing is impossible #liveablelimerick pic.twitter.com/1gwKZ28MaJ

Yes. There's a city I've been to in Spain called Córdoba. Same size and vibe as Limerick. Whole CBD pedestrianised, everyone using it

I love Spitalerstrasse, Hamburg and the waterfront. Great city that uses the water well. Lessons we could learn from. #liveablelimerick pic.twitter.com/sddq2IOlQU

City centre should for ppl to walk around, spend time & experience it's culture.Prioritise those that make the city a living breathing space

Loving the #liveablelimerick hashtag, pedestrianisation of O'Connell Street and more bike lanes all the way!

Totally support this, we need a radical, aspirational revitalization of the city centre, get it right not just catch up.

On my first visit to Limerick two years ago, I wondered why it had busy motorway running through its heart.

Have your say too. People or cars in the Crescent and in the centre of street? #liveablelimerick @stephenkinsella https://t.co/jCdbcH4ysD

As Limerick for O'Connell Street plans to be unveiled, @moranjohna1 outlines his hopes + our city's opportunity in today's @Limerick_Leader pic.twitter.com/z5BCoWJS3N