'A natural politician with a strategic mind mind': Tributes to Michael Noonan in Limerick 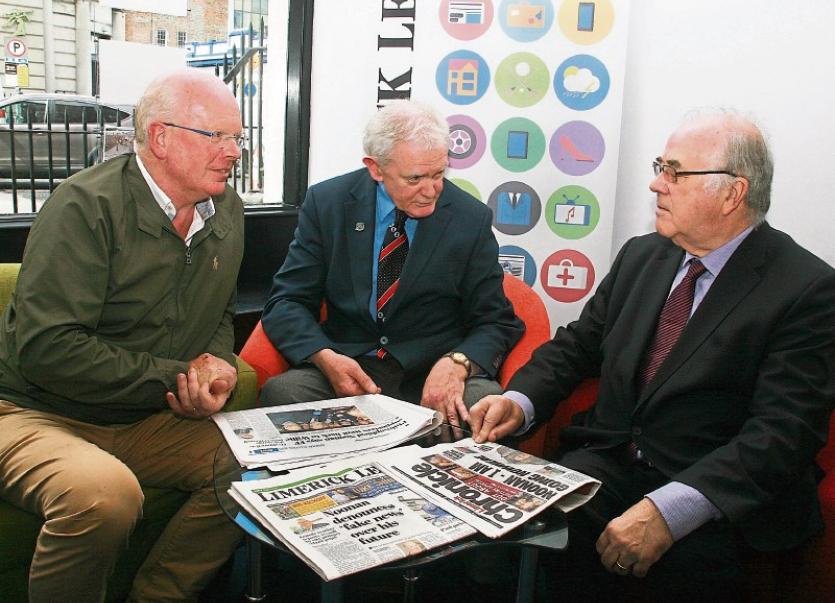 MICHAEL O’Dwyer, who chaired the Fine Gael Limerick City constituency when Michael Noonan was first elected to the Dail could tell he was a “natural politician” and a “future leader” from very early on.

As the Finance Minister prepares to step out of public life, Mr O’Dwyer and the two other Fine Gael officers, Eddie Butler and Tony Brazil, who were instrumental in his first three Dail elections in 1981 and 1982 have shared their memories of the Loughill-born politician.

The trio’s mission was to secure Fine Gael two Dail seats in the old Limerick East constituency, which they duly did, with Mr Noonan joining Tom O’Donnell in the Oireachtas.

“We were left in no uncertain terms by [then FG leader, and later Taoiseach] Garrett FitzGerald that he wanted two seats here,” he said.

Mr O’Dwyer had met Mr Noonan at an ASTI meeting in the former Glentworth Hotel in the mid-1970s. Even then, Mr Noonan had a remarkable achievement under his belt, being part of a Fine Gael ticket which helped secure the party two seats in a Fianna Fail stronghold in the local elections in county Limerick.

“Something that struck me even back then was how articulate and professional he was,” the former constituency chair said, “I was reminded about that this week. His exit statement, in terms of not going forward as the Minister for Finance and TD was dealt very professionally.”

“He seemed to be very assertive and astute. Very much with it,” he said.

Businessman Tony Brazil was the last of the trio to lay eyes on Mr Noonan in the early 1980s – and even then, he could see he was something special.

He said: “Michael was always the man passing the finishing post when the others were only jumping the last hurdle. He has a great strategic mind and he is able to see down the track as to what’s coming.”

Recalling an exchange Mr Noonan had with a supporter in 2011, Mr Brazil said: “When he got the job as Minister for Finance, someone went up to commiserate him, and said ‘God, you’ve got a terrible job’. Michael’s response was ‘Not at all, I’ve the best job in Ireland. I’m going to turn the economy around’. And he did.”

In his senior political career, spanning almost 40 years, it is very easy to focus on these latter years in the finance ministry.

But Messrs Brazil, Butler and O’Dwyer say there is merit in going further back than this.

“I remember when I came to town in the 1970s, we had very run down garda stations. Michael became the Justice Minister in 1982, and very rapidly, he initiated a great programme of building garda stations. Henry Street had just been opened. He commissioned the work at Roxboro Road, and the updating of Mayorstone garda station. It was greatly appreciated at the time,” Mr O’Dwyer recalled.

A personal strength of the Minister, Mr Brazil adds, is an unwavering ability to manage stressful affairs.

”We bought John Cushnahan to a function of the party in 1985 to talk about Northern Ireland. At the time, Michael was Minister for Justice, and he hosted the function. Only three days later, it emerged [Noonan] was dealing with a major money laundering crisis. He always had this great capacity to attend to his constituency duties despite the fact he was always under immense pressure at ministerial level,” Mr O’Dwyer adds.

Interjecting, Mr Brazil added: “A lot of people wouldn’t have appreciated at the time as Minister for Justice, his own personal freedom was curtailed.”

Michael’s chance to lead his party came in 2001 when he succeeded John Bruton – but following a disastrous general election the following year, he stepped down.

This, the three men believe, must rank as a major regret.

“He didn’t get a decent enough period to stamp his mark on it. If he were doing it again, he would be doing things a lot differently,” Mr Brazil said.

Mr O’Dwyer added: “Very early on, I travelled to a by-election with him in 1980. I had hours in the car with him. In those days, going to Donegal was a day’s work. That night I dropped him home, and I thought ‘This is a future leader’. I felt he always wanted to be leader. But he was very unfortunate when he got the leadership that there was an internal feud. And a lot of people are reminiscing on that now as they’re worried the current campaign could lead to division.”

Despite this setback, and an initially icy relationship with his successor, Enda Kenny, the pair formed a strong bond which maintains to this day.

And the former party chairman Mr O’Dwyer says it is through this relationship the pair have been able to exploit the strong relationship Fine Gael had with the European People’s Party at a time when Ireland needed it the most.

“A lot of people in Limerick don’t know that Michael Noonan is a fluent French speaker, which was a huge asset when going to Europe and talking to the likes of Christine Lagarde. When he worked in Justice, he used to always take the month of August off and went to France, and during these months, he picked up the French. Twenty years later it came of enormous benefit to us in the country,” Mr O’Dwyer exclaimed.

Privately, Mr Noonan carried many great stresses which only came to light in the later stages of his career.

The most heartbreaking of these, no doubt, was being his late wife Florence’s battle with Alzheimer’s disease.

While those close to him knew of his struggle, it was only in an interview with RTE in 2010 it fully came to light.

Mr O’Dwyer recalled how the Finance Minister would race home from meetings to be by his wife’s side.

“He would be in Brussels or Paris, or wherever. He would arrive into Baldonnel on the aircorps jet and he would get off at 10pm or 11pm and drive back down to the Regional Hospital, spending hours holding her hand, and going straight back to Dublin and carrying on with work,” he said.

Mr Butler adding: “Nobody knew how difficult it was. He kept it all to himself. How he endured it is hard to understand.”

Going back to his days as a secondary school teacher at the Crescent, Mr Noonan was always a fan of swimming – with the three men recalling his running a very successful club among his students.

To get away from the pressures of professional life, the Finance Minister still returns to his family home in Loughill, and swims in the bay, Mr Brazil said.

Summing him up, Mr O’Dwyer said: “He was the first truly professional politician I met.”

Mr Butler added: “He was very honest. He had great integrity, very organised, and he would tell you the truth.”

Mr Brazil concluded with the words “honesty” and “integrity”.

“At a time when politics and politicians have a very low rating, he would stand head and shoulders above the field. There is no back story behind Michael. What you see is what you get.”