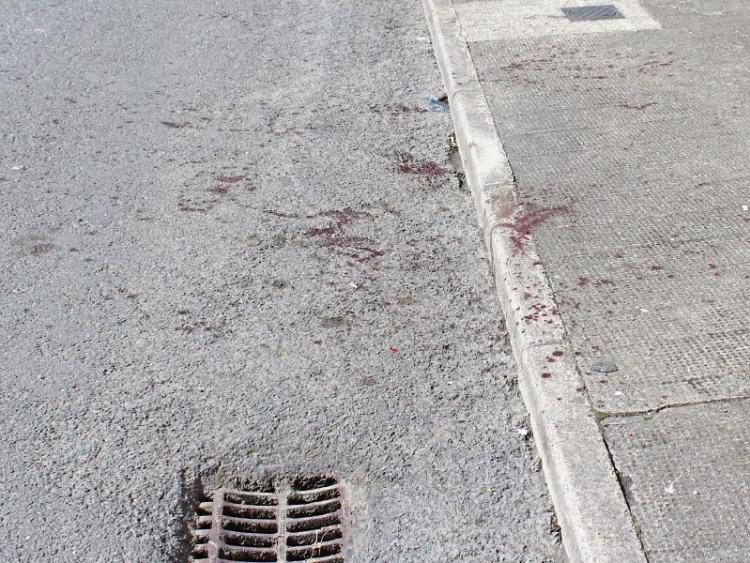 Blood on the Main Street of Kilteely Picture: Michael Cowhey

THE FAMILY of a 59-year-old man struck in the head with a hatchet - two days after his daughter got married – say they don’t want any “retaliation”.

Up to 12 men were involved in a pitched battle involving a slash hook, pitch fork, shovel, hatchet, iron bar and baseball bat in broad daylight. Three men were hospitalised following the “shocking and frightening” street fight in Kilteely at 6pm on Sunday evening.

A relative of the hatchet victim told the Leader this week: “We don’t want no retaliation. We don’t want no trouble. We just want to get on with our lives. There was children playing on the street at the time who saw it all. They are devastated over this.”

While the man struck with a hatchet left University Hospital Limerick, his family said this Wednesday that he was rushed back on Tuesday evening with a suspected bleed to the brain.

It is understood the history behind Sunday’s incident goes back over two years when there was an argument between members of the two families. One lives in Kilteely while the other is from the Nicker area.

An eye witness told the Leader she was coming out of the local shop at the time.

"A car pulled up with three occupants, they got out with a hatchet, went straight for that man and belted him down on the head with it. He dropped to the ground. He was knocked clean-out. Children were playing football and hurling. His own grandkids actually witnessed it.

“Everybody was screaming 'he is dead, he is dead’. It was an absolute and utter disgrace, shocking and frightening. The man was at his daughter’s wedding on Friday," she said. It is understood a white van with more armed men arrived in support of those who attacked the 59-year-old.

When word got out a number of individuals came on the scene in defence of the man lying prone on the street after the hatchet blow. One had a slash hook and another picked up a sword dropped by the other faction.  “Two lads from Nicker got a bad beating. One got a slash hook into his head,” said another eye witness.

The van and car sped away from Kilteely and a short time later the car crashed in Nicker. Two men were taken to hospital as a result of injuries suffered during the fight.

Deputy Niall Collins said Kilteely residents are “shocked and fearful”. “This is a quiet, rural community which like many others across County Limerick has felt the impact of outsiders being relocated there,” said Mr Collins.

Bruff gardai are investigating and anyone with any information is asked to contact 061 382940.