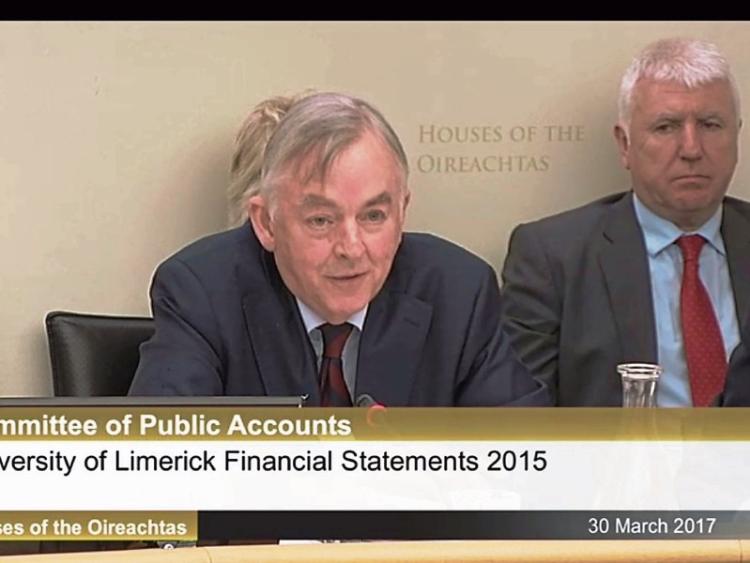 FURTHER damaging revelations against the University of Limerick will be broadcast this Thursday night in a special RTE Investigates documentary.

Following months of probing financial accounts in a number of third level institutions, the RTE Investigations Unit has discovered several payments by UL which will be subject to further scrutiny at the Public Accounts Committee.

Members of the PAC – who have seen the broadcast in advance – said they have been “shocked” by the revelations, after questioning former UL president Don Barry and UL’s director of finance John Field at a hearing in March.

The PAC is now taking legal advice on representations made to them, and will be calling representatives of UL to a further hearing.

Members of the PAC said that they are also “disturbed” by the fact that UL issued legal proceedings against the Limerick Leader newspaper and its former editor Alan English, following its original report in September 2015 which focused on the suspension of two whistleblowers in UL’s finance department.

The women were offered nearly €60,000 each in confidential severance packages, which they refused to accept. They remain suspended on full pay.

The programme reveals that UL’s director of finance, John Field, has a small shareholding in his brother’s company, Maverick Communications International Ltd, which in the past seven yeas competed for tenders and sold more than €200,000 worth of business to UL.

In an email to a UL staff member, Maverick’s owner did disclose his connection during the procurement process.

However, Mr Field himself did not declare his interest, even though it was he who was bound to do so under various different laws and codes that govern this type of conflict.

The tenders were approved by Mr Field’s department, but UL said he was not directly involved in the contract and members are not obliged to declare a interest that would not materially influence them.

The programme will also focus on Tadhg Kearney’s Jewellers on Thomas Street in Limerick city.

Mr Kearney is himself a long-time member of UL’s Governing Authority, its highest decision making body.

In 2012 the board decided to bring in a new long-service awards policy, but no tender was advertised.

Tommy Foy, the director of human resources at UL, contacted three shops to get quotes for 300 engraved Cross pens and 130 engraved Bulova watches.

And a couple of months later Mr Foy went back to the same shop, on behalf of UL, to buy customised silver medallions for retirees to the value of €42,000, in total spending more than €110,000 in Tadgh Kearney Jewellers.

Mr Kearney had not made any declaration of interest.

He said he was he was not at the Governing Authority meeting that decided on the new awards’ policy – and when he asked UL afterwards he was told he did not need to declare.

In a statement he said: “I was advised that no such obligation existed, as I had taken no hand, act or part in any decision of the University in respect of this contract and, as a result, could not possibly have been materially influenced in the performance of my functions.

UL said given time constraints of a one-off purchase, procurement was limited.

The programme also reveals that UL paid almost $100,000 for the online doctorates of two senior managers of its human resources department from a private college in Amercia.

The two recipients were Tommy Foy, director of HR and Pat Rockett.

UL also paid for their flights and hotels to attended a hooding ceremony in Florida.

In recent weeks, the new president of UL, Dr Des Fitzgerald, reversed the institution’s position in calling for a new independent review into a series of allegations regarding finances, governance, HR issues, and the payment of severance packages to employees – many without authorisation from the Department of Education & Skills.

The shift in UL’s position came just days after the RTE Investigations Unit sent its Governing Authority detailed correspondence setting out what they had uncovered.