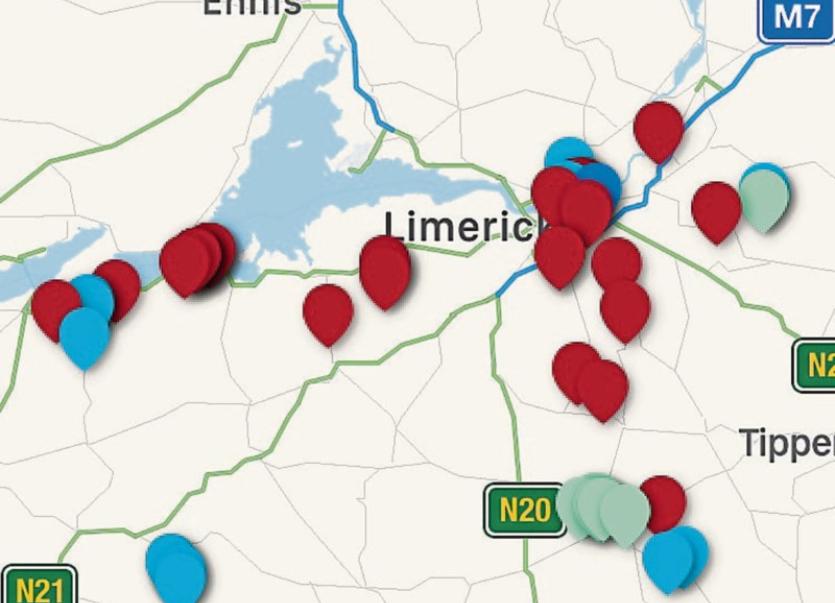 THE war against invasive species in Limerick has intensified, thanks to the involvement of the public and a piece of smart-phone technology.

A new app, Report Invasive Species, which was launched by Limerick City and County Council in February,  has seen hundreds of reports submitted about giant hogweed, Japanese knotweed, Himalayan Balsam and winter heliotrope growing profusely  in locations all over the city and county.

And this information is now being mapped to provide the most comprehensive picture ever of the extent of the invasion in Limerick.

As Anne Goggin, who is leading the effort for the council, explains: “There is a lot of talk about invasives but nobody can actually say this is the extent of it and until we understand that, it is very hard to plan a management strategy.”

The reports however, she says, suggest the problem is more widespread than was thought.

The giant hogweed is of particular concern because it is as much a public health issue as an environmental one. The hogweed if touched causes skin to blister and to lose its sun-protection ability. Riverbanks have been closed off in places where there is a continuous run because it is too dangerous. Also because it dies back in winter,  erosion problems can develop.

“We knew we had a lot of it around Bruree and Adare but we didn’t know what it was really like in between,” Ann explained.

But last year, a member of the Maigue River Trust paddled the river  discovered there was a huge amount between Croom and Adare.

As a first step to begin combating it, a 10-strong team of trained Rural Social Scheme workers began working on the Loobagh, an upstream tributary of the Maigue, as part of a pilot programme.

In the spring of last year, they sprayed 12km on both sides of the river  from Ballingaddy to the confluence with the Maigue at Garoose Bridge, south of Bruree.

“They were out in April again and reported less giant hogweed this year than last,” Ms Goggin explains.

“We feel this is a model that could be rolled out elsewhere,” she continues and plans are now being drawn up by the Maigue Rivers Trust to get four community groups along the river involved. However, it will be next spring at the earliest before any work could begin and that depends on getting Leader fund approval.

But the Maigue is not the only river system with a problem.  In the 1990s, spraying was done for four years on the Mulkear and the Newport tributary but the hogweed recolonised very quickly.

In 2015, Labour’s Cllr Elena Secas again drew attention to the problem at Annacotty where it was growing close to pathways and to where children played.

“If this is not gotten under control it will just get worse as each mature plant can produce 50,000 seeds, so urgent action at council level needs to be taken,” she said.

The dreaded weed has also appeared on the Shannon river path from the city to UL and along the canal.

Anneke Verling, who  lives in Abbeyfeale, reports that  there is extensive Japanese knotweed and Himalayan Balsam along the banks of the Feale and two of its tributaries, the Allaughaun and the Caher.

“By the time you get to Listowel, there are hardly any native plants left,” she explains.

Anneke has been working, very often single-handed, to eradicate the Himalayan balsam in particular.  The balsam can be relatively easily dealt with, Anneke adds, if pulled before seed sets.

And her hope is that communities upstream will get involved in the campaign to eradicate it.

But both she and Ms Goggin acknowledge that the giant hogweed and Japanese knotweed are far more difficult to eradicate.

Spot-spraying has been the solution for the giant hogweed when it is young, Ms Goggin explains.

It involves three to five years of continuous spraying and then continuous management over a ten year period, she continues.

And spraying is prohibited at a distance of less than 200m from a water extraction point.

The use of chemicals is not ideal, she acknowledges, and extreme care must be taken.

But she adds that they are used in a way “that minimises damage and are used for a finite project”.

She emphasises  that it is spot-spraying rather than broadcast spraying and a special sticking agent is used to ensure it sticks to the plant and doesn’t splash anywhere else.

But under no circumstances should the Japanese knotweed be pulled up.

“It is recommended you do not cut the stems,” she warns.

“You don’t try and dig it unless you use somebody who understands the risks and controls that are needed to make sure fragments aren’t spread and that it is properly disposed of.” Even tiny bits in mud on a boot can spread it.

“Disposal could be either incineration, properly done, or deep burial at up to 12 feet.” Injecting weedkiller into the stems has also been used, she adds. “But it takes several years to exhaust the root.”

The other invasive species on the council’s app is the winter heliotrope, a ground-spreading plant.

“People may not recognise it as a threat because it flowers in winter,, and has a delicate smell,” Ms Goggin explains. But she adds: “ It taked over completely from the native flora and it is very hard to get rid of. But there is research being done in Trinity College looking at means of trying to control it. It seems to be everywhere.”

At the moment in law, there is no obligation on landowners to eliminate invasive species but there is an obligation to prevent their spreading.

The beauty of the council’s app is that it allows people to first  identify the invasive species and then report it. It also allows for the inclusion of other invasive species.

“The idea behind the app was to develop something simple that wasn’t overwhelming. Other apps are either too specialist or not user-friendly. We wanted it to be suitable for general interest, not specialist groups,” Anne explains.

And she urges everybody to download it and to use it.