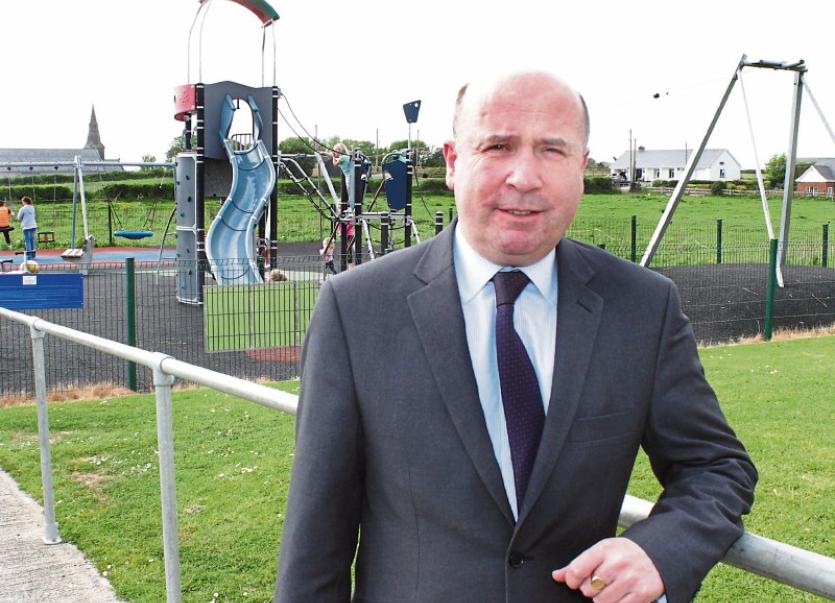 A PROPOSED new footpath to the playground in Bruff will increase usage and decrease anti-social behaviour, says Cllr Bill O’Donnell.

The long-awaited playground was officially opened in November 2014 to great excitement and appreciation. It was spearheaded by Bruff-Grange-Meanus Community Council with the support of Ballyhoura and the council.

However, Cllr O’Donnell says it is under utilised and has become a hub for anti-social behaviour. Stated rules like no littering have not been obeyed.

“It is the same couple of whelps acting the maggot. It is not a friendly environment for children currently. There is an element of anti-social behaviour there but that is only one aspect of it.

“There is a lot of littering going on which I saw first hand as I was involved in cleaning that area during TLC3. There is ongoing issues in relation to the playground,” said Cllr Bill O’Donnell, who considers it to be isolated where it is located in the Bru na nDeise housing estate.

“I believe the whole situation will certainly benefit from the construction of a proposed footpath which will effectively connect Sycamore Drive in the centre of town with the playground on the outskirts. The two estates will be linked. There is great support for this,” said Cllr O’Donnell.

Currently, children in the centre of the town are accessing the facility by means of a “rat run”.

“It is littered and overgrown. It is the only obvious means unless they are going to walk a mile around the town. I believe the proposed new footpath linking the town will be of great benefit and enhance both communities living in the two estates in terms of connectivity. It will certainly make the playground far more user friendly for those kids living in the centre of the town.”