SALE: COUNCILLORS APPROVE OF PLANS TO DISPOSE OF LANDS TO MUNGRET REGIONAL FC 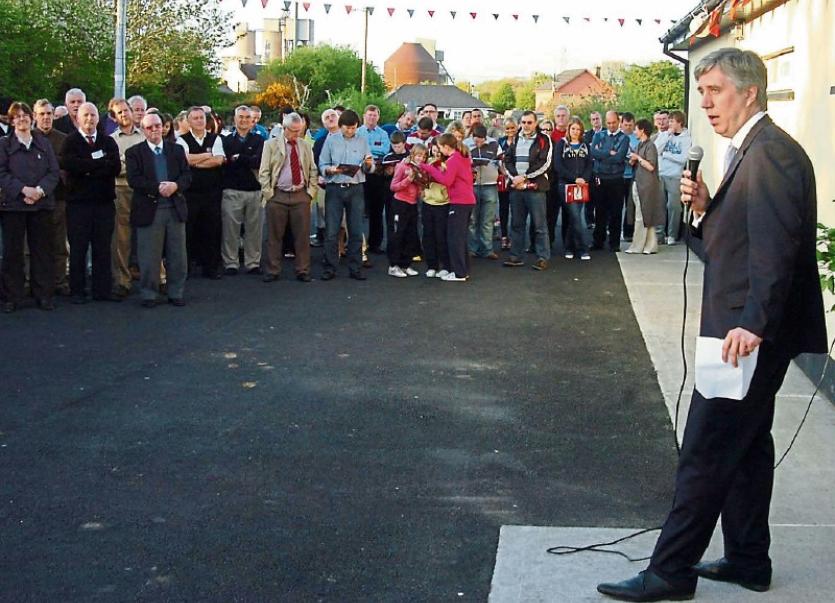 John Delaney, president of the FAI, pictured at the official opening of the Mungret Regional clubhouse in 2011

MEMBERS of the Metropolitan District say the decision to sell more than four acres of council-owned lands to Mungret Regional FC will facilitate the creation of a centre of excellence.

A proposal by council management to dispose of 4.414 acres of lands at Rathmale, Mungret, to the club was passed without a vote at Monday’s monthly meeting with councillors fully endorsing the proposals.

The agreed price is €52,968 and it is expected the formal process to transfer ownership of the lands to the club will begin in the coming weeks.

Mungret Regional, which caters for hundreds of players of all ages, is currently leasing the lands from Limerick City and Council Council.

John Delaney, president of the Football Association of Ireland, opened the current clubhouse five years ago and the club continues to thrive.

Mungret St Paul’s GAA Club also has a licence to use the existing GAA pitch on the lands and the local authority says that licence will be extended for a period of ten years.

Welcoming the proposal to dispose of the lands to Mungret Regional, Cllr James Collins said it will enable the club to draw down funding from other agencies which will allow it to develop its facilities even further.

Describing the approval of the plans as an historic day, Cllr Daniel Butler said the club had shown “great patience” during the negotiations with the council and that it has shown great ambition in recent times.

Cllr Elenora Hogan agreed saying the club serves a significant population and has made a suberb contribution to the community which it serves.  “It is a  fantastic opportunity for it to enlarge its service,” she said.

Describing Mungret Regional as a “fantastic club with great potential” Cllr Malachy McCreesh noted that a number of former players have gone on to play at a high level in Ireland and in the UK. He said the purchase of the lands will facilitate the establishment of a centre of excellence which will benefit the area for years to come.