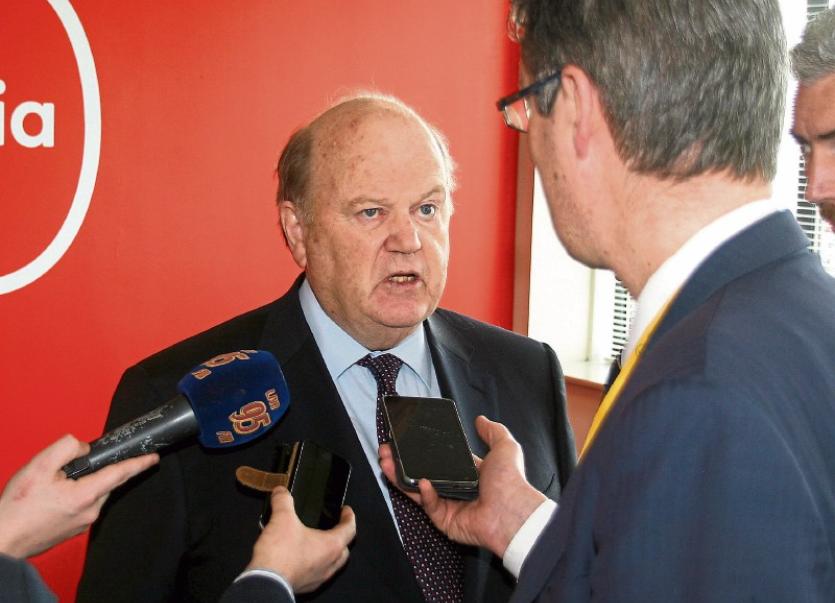 FINANCE minister Michael Noonan has confirmed that he will not seek a role in the new Cabinet being formed under a new leader of Fine Gael and will also not seek re-election in the future.

In a statement issued this Thurday, the long serving Limerick TD has announced that following Taoiseach Enda Kenny's decision to step down as party leader - thus sparking an election to succeed him - Mr Noonan does "not wish to be considered for Cabinet by his successor, whoever that may be.

"I have been honoured to serve as Minister for Finance since March 2011 and have introduced 6 annual budgets and one supplementary budget.

"I believe now is a good time for a new Finance Minister to take up office. Ireland is the fastest growing economy in Europe, the budget is almost balanced and we are on the cusp of full employment.

"I will continue to carry out my duties as Minister for Finance until a successor is appointed."

The 73-year-old Loughill native also said he will "not be seeking re-election to Dáil Éireann at the next General Election. It has been a privilege to represent the people of Limerick since I was first elected in 1981 and I look forward to continuing to do so until an election is called."

Tributes have been coming in from across the political spectrum following the news the veteran TD is to retire from politics.

His close political confidant, Senator Maria Byrne said: "Over the last 40 years Minister Noonan's commitment to Limerick, Fine Gael and the country has been exemplary. Due to Minister Noonan Ireland is the fastest growing economy in Europe, the budget is almost balanced and we are near full employment."

She added: "Minister Noonan has served the people of Limerick honourably and his work will have a lasting effect on both Limerick City and County. On a personal note having worked very closely with Minister Noonan for many years I would like to thank Minister Noonan for his service and being a great mentor to me throughout my political career and I wish Michael and his family the best for the future."

Cllr Elenora Hogan, a former chairperson of Fine Gael's Limerick City constituency, added: "In his term as Minister for Finance he has represented Ireland and Limerick well, overseeing our emergence from a deep recession. He has always been a great representative for Limerick City and County and we are now reaping the benefit of his hard work. I would like to wish Michael and his family all the best in the future"

Labour TD Jan O'Sullivan, who has served Limerick East and latterly Limerick City alongside Mr Noonan since 1998, added: "Michael Noonan will be remembered for his contribution to the economic recovery of this country as Minister for Finance, working alongside Brendan Howlin as Minister for Public Expenditure."

“He has also made a substantial contribution to Limerick, and as Minister I found him to be a constructive and supportive colleague in Cabinet. We worked together on many issues that matter to Limerick and its people over the years, and I wish Michael well in the future," said the former Education Minister

Metropolitan mayor, Cllr Michael Hourigan added: "We have been campaigning together since the 1980s. He has become a colleague and a friend. He has devoted all his time and energy to the people of Limerick. He was an excellent representative in Dail Eireann and much of the work done in Limerick he can take the credit for. His footprint will be very hard to replace."

His deputy, Cllr Daniel Butler tweeted that Mr Noonan will be "a huge loss to #Limerick having that strong voice at the cabinet table. Let's hope the jobs and investment can continue in his absence."

Huge loss to #limerick having that strong voice at the cabinet table. Let's hope the jobs and investment can continue in his absence. https://t.co/Xijyy9JPSs

Thanks @MichaelNoonanTD for your service to our Country, Limerick and @FineGael https://t.co/w3d1PrPU0E

@Limerick_Leader #MichaelNoonan has been great 4Limerick. Council reorganisation / purchase of prime sites fro Nama & #Limerick is on the way up.THX due 2him

The steady hand Michael Noonan brought to our public finances and to @FineGael was remarkable. A giant of Irish politics.

Min Noonan's ex-cabinet colleague @JanOSullivanTD: 'He made substantial contribution to #Limerick. I found him constructive and supportive' pic.twitter.com/vqwD8x3kDS

Speaking on Min Noonan's retirement: @senatormbyrne : 'Over last 40 years commitment to #Limerick, @FineGael and country has been exemplary' pic.twitter.com/zQg28uUaDh

For more updates, stay with www.limerickleader.ie throughout the day.