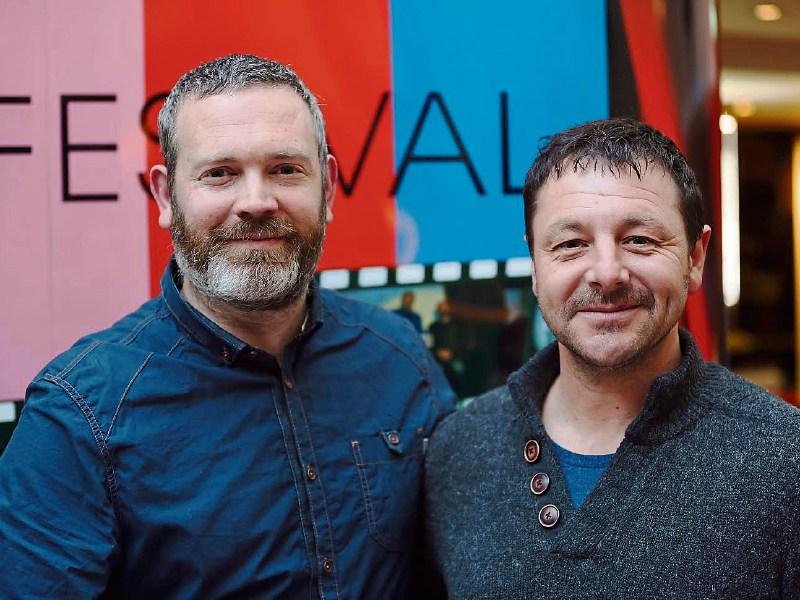 Joining forces: Simon McGuire of Limerick Film Festival and Zeb Moore of the Richard Harris International Film Festival, who have announced that the festivals are to combine into one festival

ONE of the tangible legacies of Limerick’s designation as National City of Culture in 2014 has been the newfound confidence our film community is witnessing.

Behind the scenes, film production in Limerick has been happening for some time but perhaps not at a level that made it stand out as a cultural genre of note, locally, nationally or internationally.

The announcement in 2015 that Limerick was to be home to the new Troy Studios was a major boost to the local film community, a legacy of the old Dell building in Castletroy being showcased during the year of culture in 2014.

I do not claim to be an expert when it comes to how our local film community operates but one thing did seem to stand out for me: we had a heck of a lot of activity in the film ‘festival’ sphere yet we seemed to have no strategy for tying our many film production assets together.

One of the stand-out successes in recent years has been the development of the Richard Harris International Film Festival.

Led by a small group of dedicated individuals, this initiative has evolved relatively quickly into a celebration of film that is getting noticed here and abroad.

The Harris festival is still in its infancy but its potential is clear. It has a good brand. It has some major players in the world of international film on its side - including film star Jared, a son of Richard Harris. Finally, it has a team who are willing to put in the hard graft and go the extra mile.

It is so refreshing, therefore, to hear that the Richard Harris International Film Festival and Limerick Film Festival have now joined forces.

Limerick Film Festival was founded in LIT almost eight years ago and over the years attracted a following of filmmakers and visitors from across the world in turn giving the filmmaking talent of Limerick a chance to show off their skills to a wider national and international audience.

Simon McGuire, a stalwart of the world of film, was the founder of Limerick Film Festival and is now set to join the board of the Richard Harris Film Festival as both entities now merge their individual offers.

This announcement is significant.

Limerick is not Hollywood. While it has a strong reputation in terms of our ability to produce quality film-making talent it wouldn’t traditionally have been seen as the go-to place in terms of film production or showcasing.

Pooling the experience of the Limerick Film Festival and the Richard Harris Film Festival makes total sense. They will both share their connections.

They now have a platform to successfully apply for shared funding opportunities. They both have a huge opportunity to work together and very quickly create a celebration of film, based in Limerick, that rivals any of the more recognised film ‘festivals’ in Ireland and further afield.

The merger of the Richard Harris Film Festival and Limerick Film Festival is a positive step forward for the city’s cultural community. What excites me most about this announcement is the fact that it demonstrates a very clear recognition within our arts community that collaboration can reap great rewards.

Merging any established entities requires maturity, vision, co-operation and a desire for success.

The partnership of both festivals coincides with the continued development of Troy as well as the launch of the new third level programme in Creative Broadcast and Film Production at LIT.

It is anticipated that this year’s newly merged festival will receive a significant boost in terms of local authority funding, a move that will give the organisers a huge opportunity to attract other sources of funding or sponsorship opportunities.

Simply put, we are in exciting times in terms of how we develop our reputation as a film centre in Ireland.

The film community in Limerick is now showing real ambition in terms of how it plans for the future. It is interesting to note that this comes as the new Creative Ireland strategy outlines a clear vision to “create a single proposition based on Irish culture and creativity that represents a considered, compelling and imaginative view of how we wish to be seen by the outside world – the outward expression of our identity – for everyone who wishes to know about or to engage with Ireland”.

When considering Creative Ireland’s concept of creating a ‘single proposition’ it must also be noted that Limerick’s innovative film community is not solely limited to the Richard Harris Festival or Limerick Film Festival.

Mary Immaculate College is tackling the issue of gender inequality in the Irish film industry through its hosting of a day-long colloquium entitled “Women in the Irish Film Industry: Moving from the Margins to the Centre”.

Alliance Française hosts the Tres Court International Film Festival in Limerick, an event with simultaneous screenings over 10 days in nearly 100 cities in France and 30 other countries.

And then we have the Light Moves Festival of Screendance, Ireland’s international festival of dance on film, a response to the vibrant and expanding field of dance film in Ireland and internationally.

As our film community continues to gain confidence further collaborations might be considered. When viewed in isolation, Limerick’s many individual offerings in terms of film might not be perceived as packing a big punch.

However, when viewed as a whole, it is clear that we are well placed to develop our burgeoning film reputation – be it academic, technical, written, performance or celebratory – through a single entity that not only we can be proud of but is one that is the envy of the film industry worldwide.