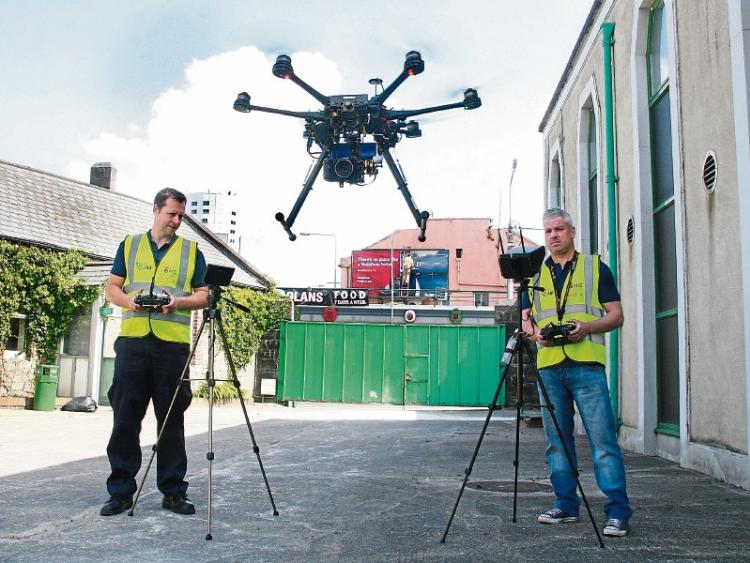 THE man responsible for dramatic aerial footage of last week’s commercial fires in Limerick city says he’s been inundated with calls and queries since the footage went viral having been published on the Limerick Leader website.

Jimmy Long, who established his company Long Range Media last year, recorded the footage of the fires – at Clear Circle recycling, Ballysimon and DGD Shredding, Raheen – on cameras which were mounted on a hi-tech drone.

A qualified carpenter the 38-year-old, who is from St Patrick’s Road is the only city-based drone operator who is fully licenced and registered with the Irish Aviation Authority (IAA).

“Anyone can go into a shop tomorrow and buy a drone and you can fly almost anywhere up to 50 feet without a permit. Once you fly over 50 feet then you need a permit which you need training for – the problem with the industry is nobody knows the rules,” explained Jimmy who makes his own drones.

By law every drone which weighs more than 1kg must be registered with the IAA before they are used – either commercially or as a hobby.

“They are a dangerous machine, they are far from a toy as most people treat them. If they suddenly drop from the sky they could kill someone,” said Jimmy whose largest drone can carry a load weighing up to 25kgs.

“I have trained up and I have my licences and my permits and insurance so legally I am licenced to fly to 300 metres – I have to keep a visual line of sight,” he said adding that the cameras he uses records video footage in 4k Ultra HD quality.

While he continues to work as a carpenter, the city native says he hopes his company will take off and allow him to change career in the near future.

“There has been a lot of interest in the last month and then with footage (of the fires) last week I’ve been inundated with phone calls, emails, text enquires in relation to potential work so I am in the process of arranging meetings,” he told the Limerick Leader.

Jimmy says there is huge potential for drone technology and that he hopes to focus on work within the construction industry such as carrying out surveys of buildings and sites.