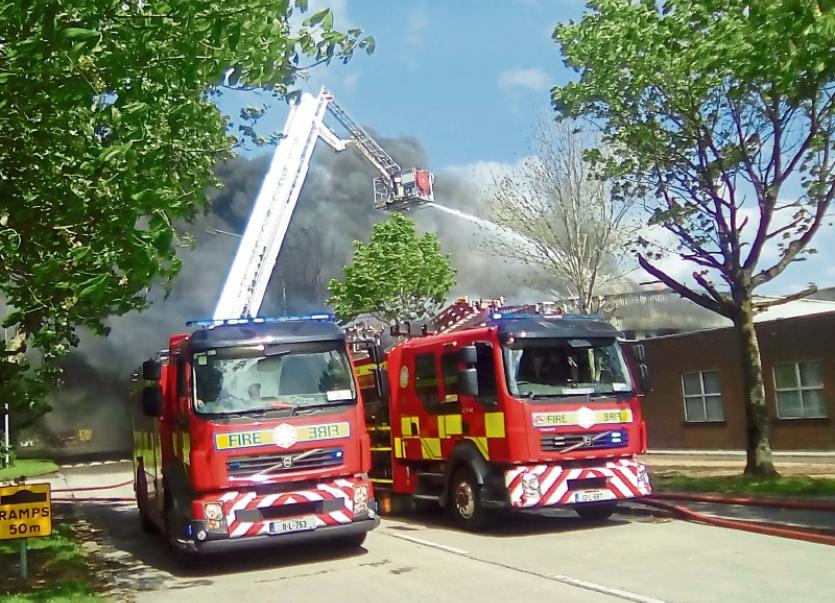 The scene of the fire - Picture: Donal O'Brien

The UL Hospitals Group is advising residents living in the Raheen area of the city to stay indoors and to close their windows as emergency services continue to tackle a commercial fire at Raheen Industrial Estate.

Several units of the fire service from Limerick and Clare were deployed at the scene of the blaze – the second in Limerick in less than 24 hours – at around 11.30am this Friday.

Thick plumes of smoke can be seen for several miles and drone footage recorded by Long Range Media, shows the extent of the blaze.

In a post on social media shortly after 4pm, Limerick Fire and Rescue Service confirmed the fire is now under control but that crews will remain at the scene for some time.

While there are no reports of any injuries, the UL Hospitals Group says people living in the area and motorists driving near the industrial estate should take precautions.

“Some of the substances present in smoke can irritate the lining of the air passages, the skin and the eyes. Respiratory symptoms include coughing and wheezing, breathlessness, phlegm production and chest pain,” said a spokersperson who advised that anyone with continuing symptoms should seek medical advice.

A spokesperson for Limerick City and County Council confirmed a team from the council’s Environmental Services department is also at the scene and are monitoring the situation.