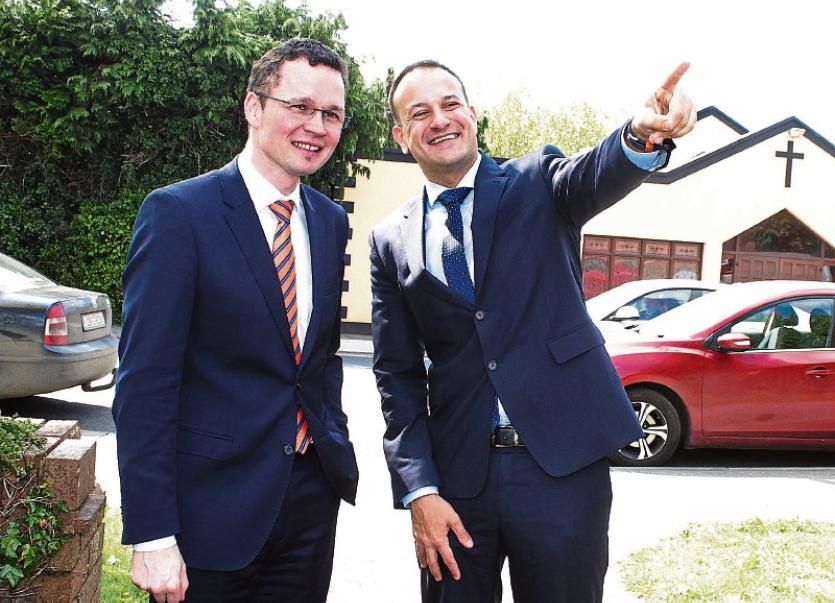 Minister for Social Protection, Leo Varadkar with Minister of State for Tourism and Sport, Patrick O’Donovan during his visit to Newcastle West

THE Minister for Social Protection, Leo Varadkar has said he would like to see a comprehensive “catch-up plan” to boost economic activity in rural towns and villages.

And, he told the Limerick Leader, infrastructure was key to that.

On a visit to Newcastle West last week, Minister Varadkar said: “ I do see, travelling around the county, a lot of towns, where particularly retail and other aspects of the town haven’t bounced. There are a lot of reasons for that. So much retail has gone online.

“It has been a two-speed recovery,” the Minister said. “ What we really need is a catch-up plan. That is down to infrastructure. Roads is a huge issue and rolling out the national broadband plan.”

However, he stressed: “I think it is important to acknowledge the fact that unemployment in Limerick is almost half of what it was in 2010. Unemployment has fallen faster in Limerick than in Dublin or Cork. While people may not see it everyday in their lives, more people are in work than ever for a very long time.”

His visit co-incided with a campaign aimed at reducing welfare fraud.

“Any time is a good time to have a publicity campaign,” he said, in answer to the question why such a campaign now.

A campaign aimed at the self-employed informing them of their entitlement to free eye-testing had just finished, he pointed out.

And he described the anti-fraud campaign as “really encouraging members of the public to report suspected welfare fraud”.

“We never know for certain how much fraud there is. In any year we recover nearly €110m from fraud and errors, of which €40m is fraud,” Minister Varadkar said.

“It is definitely worth it. What we recover from fraud and control is about €500m a year. If we didn’t do the spot checks on public service cards we would lose €500m a year.

“If you think what €40m is, it is enough maybe to double the back-to-school clothing and footwear allowance,” he added. “I won’t be doubling it. But I would like to see an increase. The cost of going to school is enormous for parents.

“We have no evidence of any fraud being higher in this area or in Limerick,” Minister Varadkar said. He had held a series of meetings with the IFA, the ICMSA, West Limerick Resources and Ballyhoura about CE and Tus schemes, he said and was in Newcastle West to meet members of staff of his department.