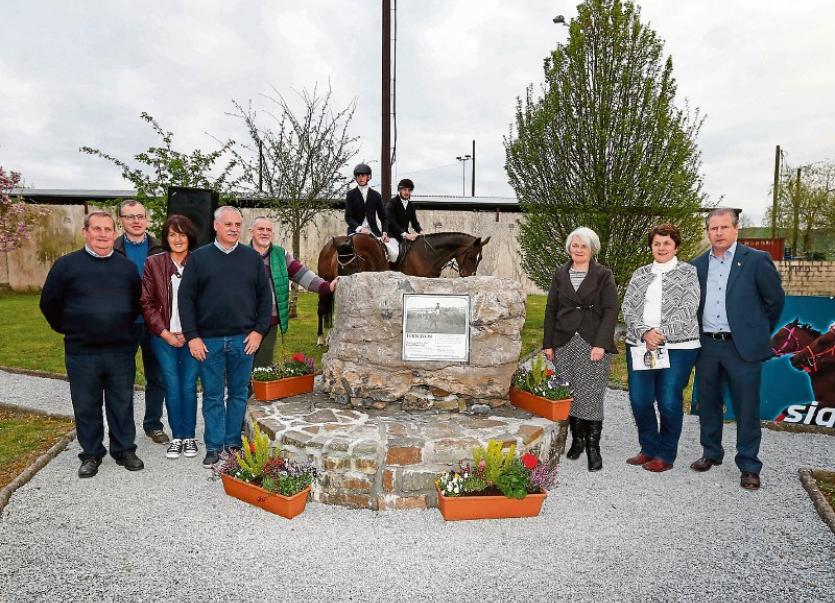 Gill McCormack with Alan, Shaun, Gillian and Claire officially unveil the plaque to celebrate the 50th anniversary of Foinavon’s win in the 1967 Grand National at Aintree Pictures: Keith Wiseman

A FOAL that took its first tottering steps in Cross, Pallasgreen has had a plaque unveiled in its honour.

The horse, bred by Ted Ryan, and broken in by local men Gus McCarthy, Dan Kavanagh and Willie Harding would go on to make headlines around the world.

Fifty years ago Foinavon won the Aintree Grand National at odds of 100/1 after avoiding a pile-up at the fence now named after him. The horse and race has gone down in racing folklore.

Traffic almost comes to a standstill in Pallasgreen for the Foinavon plaque unveiling ceremony - not unlike the race! pic.twitter.com/H7K7cZ3r5A

Guest of honour was Jill McCormack, a daughter of Ted Ryan. She was a little girl back in 1967 but can remember the day vividly.

“My mother had half a crown each way on Foinavon – that was a lot of money in those days. She had it on with the local bookmaker. There was great excitement. We listened to it on the radio because we had no television,” said Jill.

Her late mum, Claire, was looking forward to buying a nice new outfit for the races at Limerick Junction.

“Her dad Ted was as cool as a breeze as he heard the horse he bred romp home.

“He was a very easy going man so it was very hard to shock him. He was just a bit disgusted he didn’t have more money on him. I think he might have had a shilling each way which was still a good bet at the time,” said Jill, who had three of her children – Alan, Gillian and Claire and one grandchild Shaun – with her. They all lifted the horse rug off the plaque.

“I just want to say we really appreciate all the people who put in all this work and the whole idea behind it,” said Jill.

The Fennessy family of Kilduff donated the beautiful stone and John O’Dwyer, Dromlara, used his craftsmanship to prepare the plaque. Ger O’Connell, Pallasgreen correspondent for the Limerick Leader is credited with coming up with the idea.

“As a community it is important we mark all these occasions,” said Michael. Indeed, a stone’s throw away from the plaque to Foinavon is a statue to another champion – Paddy Ryan, Olympic gold medal winner.

Siobhan English, chairperson of Pallasgreen Templebraden Historical Society, said the ceremony gives a “great sense of pride in our place and pride in our people”.

“Threads which bind communities together are its shared stories,” said Siobhan.  She wondered if Foinavon’s start in life in the quiet Pallasgreen countryside and the expert handling of local men may have contributed to the horse’s placid, easy going nature, which helped him avoid the chaos in the Grand National.

Siobhan also noted the winning time of the race was faster than some winners in previous years which belies the impression he was a no hoper.

Ger O’Connell said they hoped to visit Aintree in the future to see the Foinavon fence.

The evening ended with the race being shown in O’Dwyer’s and a big cheer went up when Foinavon crossed the line.