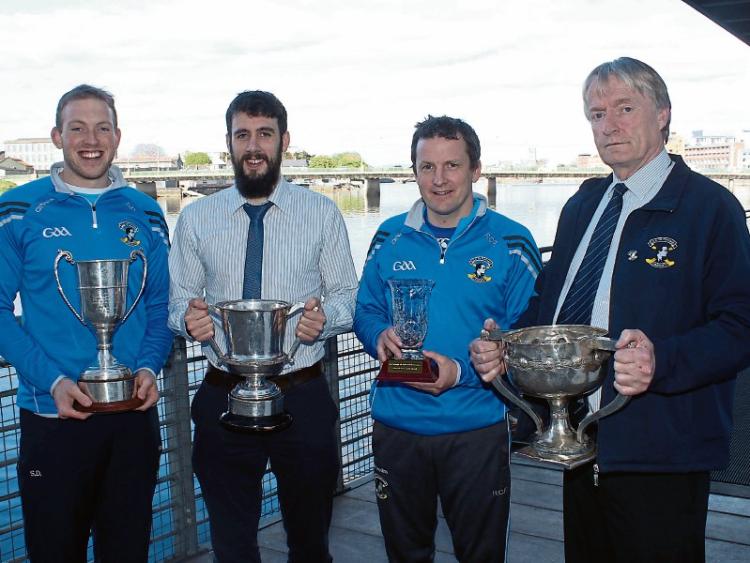 The late Liam Kennedy, far right, with fellow Na Piarsaigh clubmates at the Person of the Month Awards in 2016

THE “UNSUNG hero” who pioneered hurling at Ardscoil Rís in the late 1970s, Liam Kennedy has passed away.

Liam Kennedy, originally from Tipperary, was heavily involved in Na Piarsaigh GAA club for more than 30 years, alongside his wife Ann.

The treasurer of Na Piarsaigh is father of Darragh, Deirdre and Padraig.

Paying tribute to Mr Kennedy, former Na Piarsaigh chairperson Tim O’Connor described him as an “unsung hero” for the club and his former workplace.

The retired science and mathematics teacher was responsible for introducing hurling to Ardscoil Rís, where he started teaching in 1978.

“He was very much involved in the games and the coaching in Na Piarsaigh. He managed Féile teams and managed senior teams. He had been involved with every age group in the club, and he was the first man to start the Easter and summer camps, along with a few other lads.

“He was very well-respected. Anyone he worked with at school would have tremendous respect for him,” Mr O’Connor said.

He said that it was a “very proud moment” for Liam to watch his son Padraic lift the All-Ireland senior club hurling cup in 2016.

“Liam gave unreal service, and it is going to be a massive loss to the club, and a massive loss to the community. He was the man who started the hurling in Ardscoil Rís. And at the time, it wasn’t popular to be involved in hurling, but he got it going. He was really the pioneer,” the Na Piarsaigh clubman said.

In recent years, Ardscoil’s hurling team has been one of the most successful in the country, winning the Harty Cup four times since 2010.

“He was a man who never sought gratitude or publicity, he always worked away in the background. He was an unsung hero of Ardscoil Rís, and the unsung hero of Na Piarsaigh,” Mr O’Connor told the Leader this Thursday.

“He devoted his whole life to his family and to the club, particularly in the last three years where he did trojan work. He was always there if you needed him.”

Reposing at Griffin’s Funeral Home, John’s Gate on Sunday evening, April 30, from 4pm to 6pm. Removal will arrive at Christ the King Church, Caherdavin on Monday, May 1, for 12 noon Mass. Burial afterwards in Castlemungret Cemetery.