Less than a month after tragic death of Des Butler, 50, son Rioghan walks in his father's footsteps winning the same cup 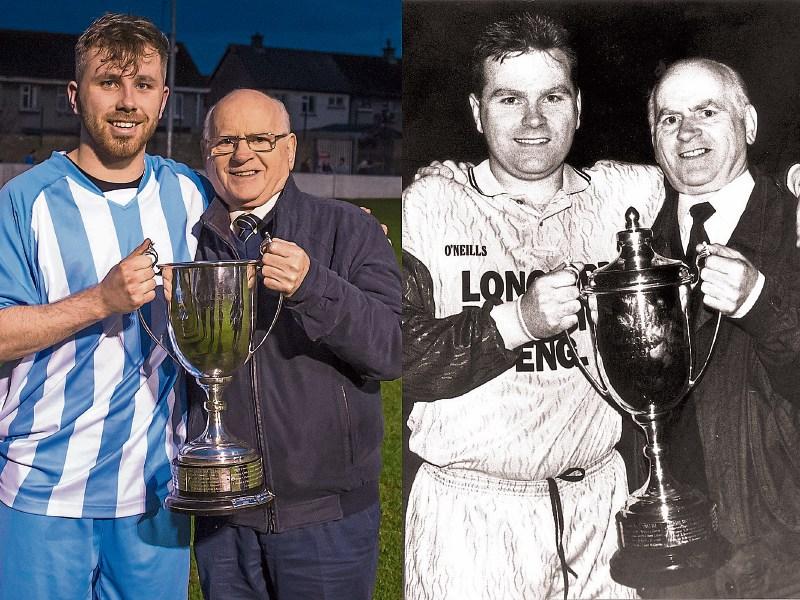 Rioghan Butler and his grandfather Billy - right, his Dad Des and Billy

THERE was an emotional moment for Rioghan Butler in Limerick's Jackman Park recently as he lifted the same trophy his late father had exactly 20 years earlier.

Rioghan and his Caherdavin B team-mates took on Shelbourne B in the Open Cup final at Jackman Park – just weeks after losing his beloved father in a tragic road accident.

The 20-year-old internet systems development student at Limerick Institute of Technology said it was an emotional and moving moment for him and the wider Butler family, especially for his grandfather Billy who lifted the cup with him and recreated the moment he shared with his late son Des two decades ago.

“It was just an amazing moment,” he told the Limerick Leader.

Caherdavin hadn’t won the cup in the last 20 years – since Des Butler played on the winning team in 1996/97.

A decision was made by the team, led by manager John Flanagan, to let Rioghan lift the cup in lieu of the captain James Wallace.

A spokesperson for the club said it was a “special moment to give Rioghan Butler the honour of receiving the trophy. What a great way to honour his father Des by giving Rioghan this special moment.” They said it was a decision which all the team could be proud of.

Caherdavin native Des Butler, 50, was fatally injured while cycling on the N18 main Limerick to Galway Road near Bunratty on Sunday, Mother’s Day.

Rioghan, who described his father as “my idol and my best friend”, said winning the cup so soon after his father’s death was an “amazing coincidence”, which took the team and the family by surprise.

The right winger toasted their triumph with team-mates afterwards in the Country Club in Caherdavin.

Mr Butler was employed as a compliance manager with Equinix, an American multinational company headquartered in California, which specialises in enabling global interconnection between organisations and their employees.

Through his work, he was nominated last year for an award under the Business Continuity Institute’s 2016 European business continuity and resilience awards.

Caherdavin Celtic Football Club said the late married father-of-two and life-long member of the club was a “true gentleman, a great friend and parent.

“He played with Caherdavin all his life and was a former committee member. He was just a super guy, and this has really shocked the club and the community.

“He is going to be very sadly missed by all of us. He was just an all-round top guy,” said Declan Moylan, chairman of the club.

He is a brother of Limerick Leader photographer Adrian Butler, and a son of Billy Butler, who was formerly head of the lithographic department with this newspaper.

He is survived by his wife Valerie, daughter Aisling, son Rioghan, brothers Adrian and Jordan, sister Susan, and parents Billy and Peggy.