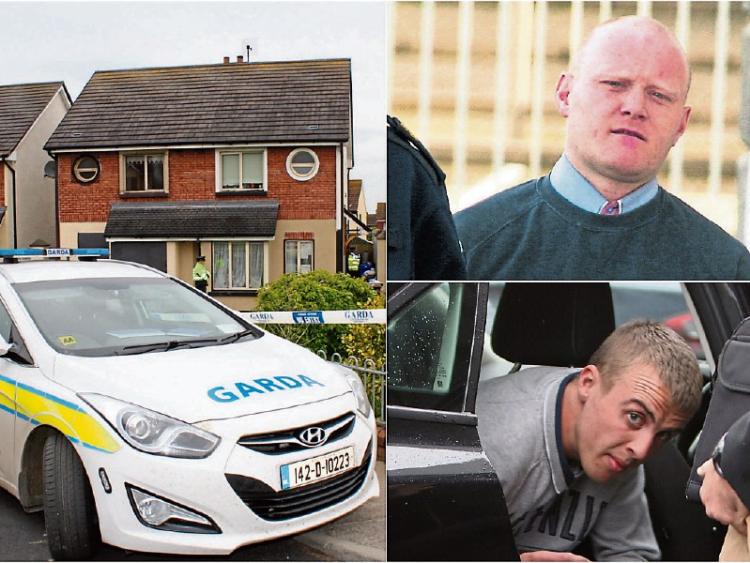 Gerard Hogan (top) and Dylan Hayes (bottom) have pleaded not guilty to murdering Shane Murphy at The Grove, Pallasgreen on April 30, 2015

A woman has described how she tried to intervene while her boyfriend was being stabbed to death by two men at a house party almost two years ago.

Sharon Kelly was giving evidence this Tuesday in the trial of Dylan Hayes, aged 22, of The Crescent, Kilteragh, Dooradoyle and Ger Hogan, aged 33, of Raheen Square, Ballinacurra Weston who have pleaded not guilty to murdering 26-year-old Shane Murphy at The Grove, Pallasgreen on April 30, 2015.

Ms Kelly told Paul Burns SC that she and Mr Murphy had been boyfriend and girlfriend for about three months prior to his killing.

The Central Criminal Court has heard that on the day he died the couple were at Ms Kelly’s home with two other women and one of the accused men – Ger Hogan.

The two women went to a local shop to get drink and came back with Druid's Glen cider and beer.

At that point Ms Kelly, who was not drinking, said the atmosphere in the house was "fine" but when one of the women told her that Dylan Hayes was on his way over, Sharon told her Mr Hayes would not be allowed in.

She said Mr Hayes knocked on the door and entered with another man who she did not know.

The witness said she noticed that Mr Hayes had a gun in his hand, but did not know if it was real or a replica. She told Mr Burns that she was "very unhappy" about Mr Hayes being in the house.

"I told them to get out," she said, but Mr Hayes said he wanted to speak to another woman who was at the house and that he wanted to “sort out” a man named Wayne.

Earlier in her evidence, Ms Kelly stated that a neighbour named Wayne had arrived at the house the previous night and got into bed with the other woman while she slept.

Ms Kelly said that Wayne was drunk and didn't know what he was doing and left when told to go.

She said that normally Shane (the deceased) and Ger Hogan got on “like a house on fire” but when Mr Hayes arrived the atmosphere changed.

“They were slagging each other off,” she said, before she intervened and called Dylan a “junkie”.

“Dylan headbutted me,” she said. Then Shane told Mr Hayes to, “cop on and have a bit of respect,” before telling Mr Hayes to leave.

Ms Kelly said Ger Hogan was “egging Dylan on” telling him that Shane had called him a junkie.

“I said to Shane, ‘I want them to leave,’ so he stood up to tell them to go once and for all but as far as I can remember that is when he got stabbed first.”

She said she tried to get in between Shane and the two men but she was pushed out of the way.

“They were both stabbing him,” she said. She said Mr Hayes was using a screwdriver while Mr Hogan used a knife. She said it felt like a life-time but the attack probably only lasted about four or five minutes.

By the end Shane was on the floor covered in blood. She wrapped him in a blanket but then Mr Hayes and Mr Hogan came back and started stabbing him again, saying "give it to him, give it to him".

"I tried to stop them," she said. "I tried kicking and screaming to try and stop them." She said she got stabbed multiple times in her hands and back.

As the attack happened another woman who was in the house called the emergency services and when Mr Hogan and Mr Hayes left the scene they tried to instruct Ms Kelly on how to give CPR and to stem the flow of blood.

At one point, she said Ger Hogan came back again and said: "Ah, he'll be alright."

By the time the ambulance and gardai arrived, "Shane was gone," she said.

Ms Kelly will resume her evidence in front of Justice Patrick McCarthy and a jury of five women and seven men at the Central Criminal Court on Wednesday.