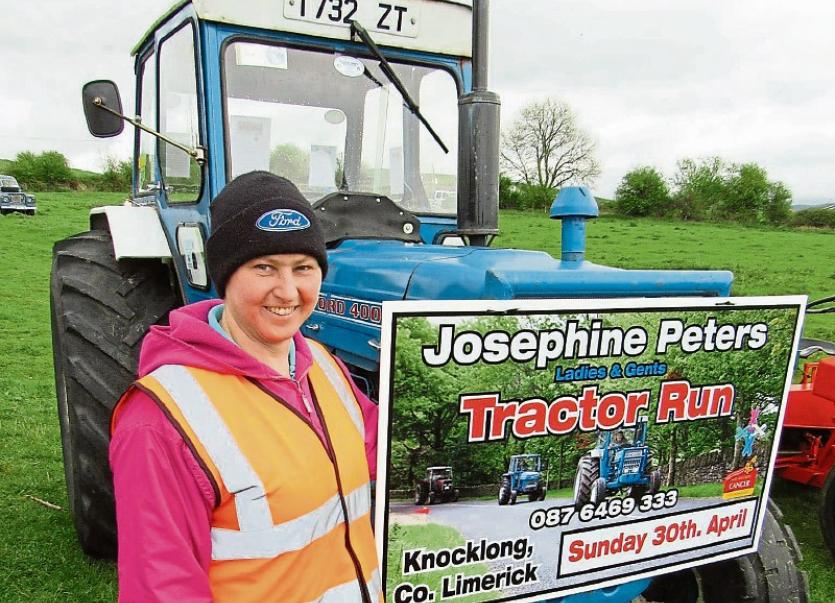 Josephine Peters is organising a tractor run in Knocklong

“I’M GOING to organise a tractor run and get as many women driving tractors as possible.”

Josephine Peters said these words to herself in the Mid-Western Cancer Support Centre at UHL last June.  From that moment, the idea became a plan and on Sunday, April 30 in Knocklong, it will become a reality.

The 51-year-old, from Elton, was diagnosed with endometrial cancer on March 16, 2016 which led to her having a hysterectomy on April 11. A CT scan on June 24, which was the same day her beloved father died, showed tumours in her lymph glands, breast – thankfully benign -and right kidney.

After six rounds of chemotherapy, 25 sessions of radiotherapy and two brachytherapy treatments she is now waiting for the results of another CT scan this week and a date for an operation to remove the kidney tumour.

Despite all of this Josephine remains positive and is kept busy planning her own tractor run, and taking part in other runs, a hobby she has enjoyed for the past three years since she bought a Ford 4000. Her love of tractors and especially Fords comes from spending summers drawing silage with her brother Pat Hughes, who has a collection of Ford and County tractors.

Due to her cancer diagnosis, Josephine chose Mid-Western Cancer Foundation in Limerick and Circle of Friends Cancer Support Centre in Tipperary to be the beneficiaries. These centres provide support to patients and their families during treatment and are essential to the well-being of those who have a cancer diagnosis.

“It seemed to be the most obvious thing to do, bringing together the two things close to my heart – tractors and cancer.  Everyone is affected by cancer and every woman that has cancer has a male relative who is also affected, whether a husband, father, son, brother or nephew.”

“So the run is for all drivers, male or female, but with the emphasis on getting women driving tractors. I have heard of women who have been learning to drive a tractor for the day. There are tractors coming from as far away as Monaghan and Armagh and all over Munster,” said Josephine, who is married to James and they have three children Trisha, James and Gerard.

Along with tractors, trucks and cars are welcome on April 30 in Knocklong. Registration from 10.30 with the engines starting at noon.

“I would just like to thank all of the vintage and classic clubs throughout the county, and the people of Knocklong, who have helped and supported me in organising the run. I look forward to seeing a great turnout

“My father’s last coherent words to me were, ‘I’m so proud of you, my darling daughter’. I know he would have enjoyed this day so much, and be a proud father. So this day is a tribute to him – Morgan Hughes,” said Josephine.