Refurbishment works are almost complete on one village's historic cottages 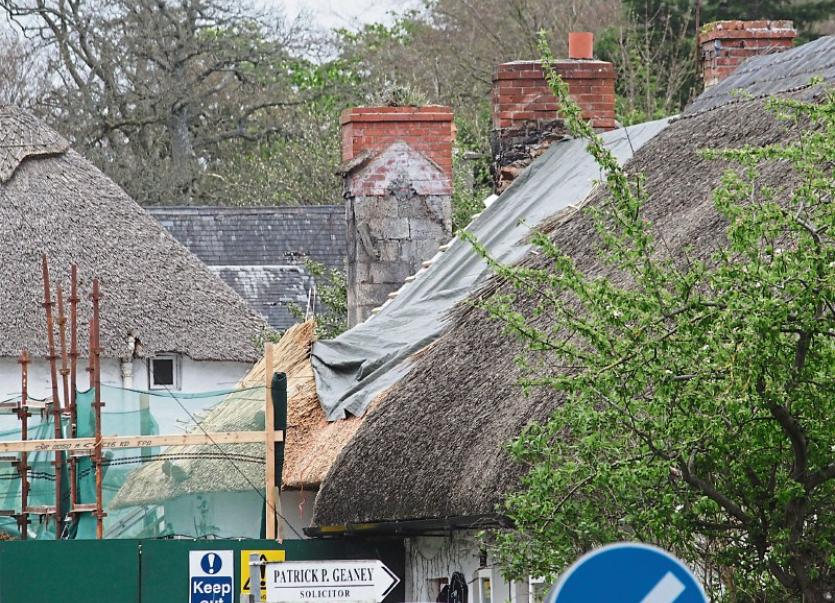 AFTER almost two years, refurbishment works are almost complete on one of Adare’s historic cottages which was destroyed by fire almost two years ago, while the other remains in a legally “derelict” state.

Thatching is underway on the Benson cottage after a full refurbishment, following the fire that completely destroyed two of the historic buildings that are so popular with tourists.

The other cottage still remains untouched since the fire, and a notice has been posted by Limerick City and County Council on their intention to enter the site into the Derelict Sites Register.

The cottage, which sits at the end of a row adjacent to the Benson property, is now considered a “derelict site” by the local authority, and the council is seeking to register it as such unless the ‘unknown owner’ makes representations within one month.

The cottage in question is still in the process of being sold, after a sale was agreed in January at “substantially above” its asking price of €130,000.

A representative from John Giltinane & Associates confirmed this week that the property is “under offer” and that contracts are drawn.

The sale will stir hopes that both cottages can be restored to their former glory, as the new buyer is also likely to refurbish the house.

The semi-detached three-bed property in the picturesque village was pitched to prospective buyers as a “rare opportunity” to buy such a unique residence, and seven buyers scrambled to purchase the property at the time.

It is understood that the buyer is from the Limerick area.

Last year, the next-door Benson cottage was approved for a grant of €16,000 for repairs, announced by the Minister for Arts, Heritage and the Gaeltacht, Heather Humphreys.

It was one of 57 heritage projects to receive funding under the Structures at Risk Fund for 2016, which provided funding for protected buildings.

Maeve Martin-Kelly of Adare Heritage Centre said that the refurbished cottage will be an attractive asset to Adare again once completed.

“We would be delighted, that tourists could come and see the thatched houses as they were,” she said.

After the fire, Henriette Benson said that all of their possessions were destroyed, along with the house which had been in the family for many years.

The two houses, which are among 11 remaining thatched cottages built by the Dunraven family as staff houses in the 1800s, were gutted by fire on a Saturday afternoon in June 2015. They have enjoyed landmark status through the years in Adare.