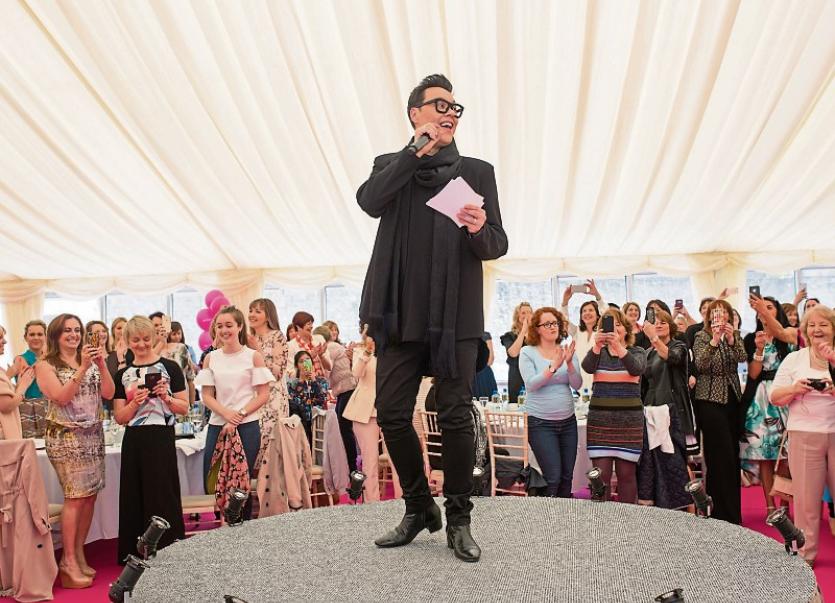 HE stirred it up and he laid it on. Gok Wan came to Newcastle West and served up a fast-paced medley of saucy and outrageous banter and quick-witted off-the-cuff remarks and the audience of 300 women and two men roared their approval, wanting more.

“This the first event we have ever done that is dry,” he announced, surprise ringing in his voice. We looked out the windows of the marquee at the walls of the Desmond Hall. Sure enough, there was no rain.

But no. This was no reference to weather. The OPW which controls the Desmond Castle complex had  ruled that no wine would be allowed with the brunch/lunch. “Are you all gagging?” Gok teased his audience.

“Why don’t we forget about the fashion and go over and get hammered?”

But the wine could wait. What the women, and the two men, wanted was Gok’s help. And he dished it out at full tilt, urging women to tear up some of the dos and don’ts of the accepted style bible.

“If you have red hair and you want to wear red, wear it,” he exclaimed.

And again; “It doesn’t matter what you wear. It’s how you feel.

“You are the person in control of your own style and nobody, including me, should tell you what to wear,” he encouraged.

But when it came right down to it, he had plenty to say about body shapes, about working the shoulder line, the waist line and the face to create harmony, about glasses, petite sizes and being top heavy.

And he had a story as well as wise words for “the older woman” who is all too often advised to cut her hair and lower her hemline when she hits 60.

“It is a bit of a shame that women are put into so many small boxes in how they look,” Gok said.

Every woman’s heart rose a little. What’s not to love with this man, they sighed.

The promised in-show make-over didn’t happen however. The woman who was to get the Gok treatment pulled out at the last minute but the master of crowds managed to pull a couple of mini-ones out of the bag instead.

The two men got their moment in the limelight too.

“What is that? Am I looking in a mirror?” Gok gasped looking at his look-alike, Gok 2, otherwise known as  Francis, all the way from the Philippines but now living in Co Mayo.

The other man, from Killarney, was also given the thumbs up for his style and needed little persuading to model for the entire audience to see.

“To think all of this fashion happens right here in this town,” Gok said in admiration after the first of two catwalk displays from local boutiques and shops.

“We wanted to give you guys a huge platform  to truly celebrate fashion in your area,” he added.

“Never stop what you are doing. It is important to keep the High Street alive.”

“Newcastle West has become a fashion hub. That didn’t happen by accident but by the enthusiasm, the hard work and dedication of boutique owners and fashion houses,” he said.

And he praised their initiative in bringing Gok to town. “It was a great coup for us.” he said, adding that the council was delighted to be supporting the event.

But Gok had special words of praise for Flo Flanagan, of the Newcastle West Business Association who had spearheaded the event.

“She is brazen, she is bold and determined and genuinely the hardest worker I have ever seen,” he said. “Every single town needs a Flo Flanagan.”

And the crowd cheered. Later came the after-glow: Newcastle West had pulled off something spectacular and had ignited an appetite for more in the future.