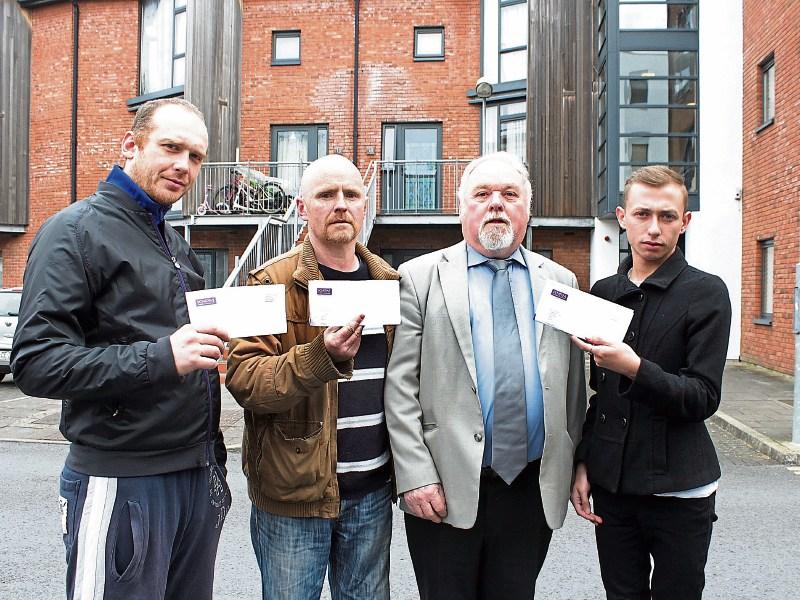 UP to 14 families are facing eviction from their homes in Limerick city as their new landlord seeks to sell on the apartments.

Residents in a number of two bed apartments at Fishermans Quay at the Grove Island woke up on Good Friday morning to notices informing them they had to leave their homes on various dates throughout the summer.

The letters sent on behalf of their landlord, Munster Pensioner Trustees Ltd, state that due to the fact they intend selling the property, the current tenants must “vacate and give up possession of the dwelling”.

The Leader understands the pension fund purchased the properties earlier this year.

Residents have pledged to fight to stay in their homes and have gained the support of local Independent councillor John Gilligan, who said that while the landlord’s action is legal, “it’s almost certainly immoral”.

Alan McCarthy, who lives with his only son Daniel, 19, in one of the apartments, said once he received the termination notice he “couldn’t stop being sick”.

“My whole life has been turned upside down. I had just come back from walking on the Canal Bank and a poor swan had hit the wire. I had to dive him to save him from drowning. I thought I had my good deed done for the day. But no good deed goes unpunished apparently,” he said.

Alan – who pays rent of €550 a month – added: “I think it’s all about money. Someone is trying to make a fast buck at our expense”.

The Property Price Register, the national database of all residential sales, currently lists two apartments as sold at Fishermans Quay. One sold for €111,000, the other for €89,300, both in the last month.

A number of other apartments in the complex are on the market from €100,000, while a unit there was recently listed for rent at €900 per month.

Alan also criticised the timing of the letter, adding: “It just suggests a total lack of any heart. I’m not particularly religious, but on Good Friday – come on! That’s not particularly nice.”

The letter was dated Thursday, April 13, but Alan says he received it the following morning.

Ryan Mowat, 20, has lived in the complex for five years with his father Andy.

He said: “We were shocked, and taken aback. We’ve been living here the last five years and have never been happier.

“To get a letter telling us to pack up and go – because we don’t want you – is not right.”

Cllr Gilligan condemned the letters, saying: “These people will have no place to go. These people have the indignity of being kicked out on the side of the road.

“These are hard working decent families who should not be treated like this. Nobody should accept this kind of treatment by a faceless individual.”

Munster Pensioner Trustees Ltd – which has an address in Castletroy – referred queries from the Leader onto the management firm in the area Kersten Mehl Property Management.

Mr Mehl said: “We have managed this complex for the last eight years. I received instructions to issue these notices on a number of two bedroom apartments, as the landlord wished to sell them.”

While local residents claim 14 apartments are subject to these notices, Mr Mehl said that number is closer to eight.