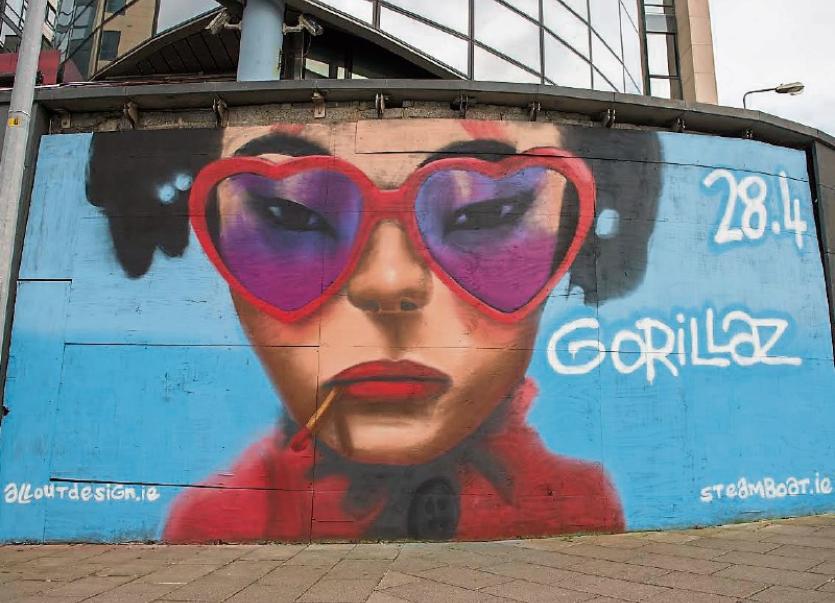 LIMERICK city has been chosen as a prime location to promote an upcoming album by world-renowned virtual band Gorillaz.

As part of a unique global campaign for the new album Humanz, Steamboat Records was tasked by major label Warner Music with delivering a “monster mural” along Limerick’s riverfront.

Mark Carey, owner of Steamboat Records, said that this project is a “big coup for Limerick”. The giant graffiti piece is on the wall outside the Riverpoint building, by Shannonbridge Roundabout.

“We work with Warner and all the major labels, and Warner are doing preparations for the Gorillaz’ new album launch, which is called Humanz. And they wanted us to do some funky things to create a bit of hype for it. And this is part of their overall global marketing campaign, and they are hoping to plan these kind of things in a few cities around the world,” he told the Leader this Friday afternoon.

“We said: ‘Yeah, we can make that happen. We can get it done quickly, and really well.’”

The image depicted in the city centre is of fictional Japanese lead guitarist, Noodle, and is featured on the album’s front cover and music video ‘Let Me Out’.

Mark commended Limerick artist Steve O’Donnell for delivering the project in the space of 24 hours. Mr O’Donnell operates his own street art-graffiti business in Dublin, All Out Design.

Steve, who described the project as a “monster mural”, posted on social media: “It was an absolute joy to work on this one. Everyone seemed to enjoy it just as much as we did painting it! Constant well wishes, beeps and even a few cheers throughout the day!”

Mark added: “The Riverpoint is such an iconic building in the city, and it works well for two reasons; it is close to where we are, and it represents the future of Limerick.”

Gorillaz rose to worldwide fame following their first hit single ‘Clint Eastwood’ and ‘Rock the House’ in 2001, and ‘Feel Good Inc’ in 2005. Gorillaz is led by Blur’s Damon Albarn.

Steamboat Records, which moved from its temporary residence on Thomas Street has returned to Steamboat Quay. It will celebrate International Record Store Day on Saturday, April 22.