Artistic homage to Frank McCourt on canvas in his native Limerick 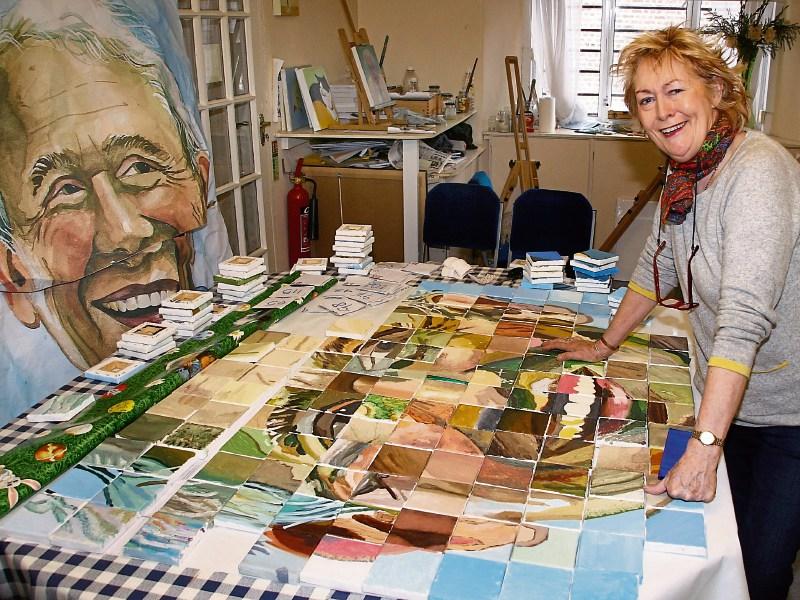 Artist and curator of the Frank McCourt museum, Una Heaton, pieces together the montage in honour of Frank McCourt

TO MARK 20 years since Frank McCourt won the Pulitzer Prize for literature hundreds of people have contributed to a large montage portrait of the famous Limerick writer.

Renowned artist John Shinnors, of the RHA, is among some 700 people to have added his own brushstroke to the canvas in a homage to the Angela’s Ashes author.

Una Heaton, artist and curator of the Frank McCourt museum on Hartstonge Street, undertook the portrait which is made up of hundreds of individual canvases to coincide with the twentieth anniversary of McCourt receiving the world-renowned prize.

Acclaimed Limerick artist Bryan MacMahon also painted one of the canvases, while one special canvas remains to be painted – by Frank’s widow, and his beloved third wife, Ellen McCourt.

Ms Heaton, who started the museum nine years ago, said tourists continue to visit the centre, situated in McCourt’s former school, Leamy’s, from as far afield as Japan, New Zealand, and Australia.

Last Sunday, April 9 last, marked 20 years to the day when the late writer received the Pulitzer for literature for his seminal work, which shot him to literary stardom when he was in his 60s, and led to two further memoirs, ‘Tis and Teacher Man.

“When he won the Pulitzer Prize, we were all amazed and kind of incredulous. I think we always knew that he was inordinately talented, but I didn't expect it,” said Maggie McCourt, Frank’s only daughter.

“When Angela's Ashes came out, it changed his life because it was healing for him,” she told the Limerick Leader in the only interview she has given about her famous father.

“There were so many things that he had not reconciled in himself, or healed himself from the darkness of his past.

“I don’t think he expected that people would have that kind of reaction to the book.”

This July, Angela's Ashes - the Musical under the acclaimed producer Pat Moylan, of I Keano fame, will be staged in Limerick’s Lime Tree theatre for 11 performances, before moving to the Bord Gáis Energy Theatre in Dublin, and then to the Grand Opera House in Belfast.

It is expected to tour to the West End and Broadway following its Irish debut.