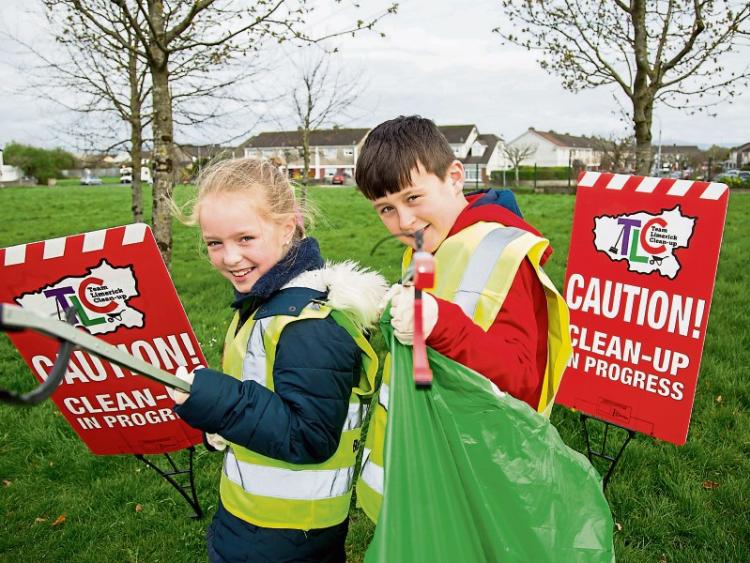 MORE than 16,000 Limerick people are taking part in Europe’s largest ever clean-up, TLC3 which swung into action this Good Friday morning.

The third annual Team Limerick Clean Up is under way, thousands taking part as part of community groups across the city and county.

It is estimated that 50,000 bags of litter will have been collected on the day by the event partner, Mr Binman. The Limerick Leader is also a sponsor of the event.

While rugby legend Paul O’Connell and philanthropist JP McManus will officially get the ball rolling later this morning in Pery Square, cleaners hit the streets from dawn this morning.

Among the areas receiving a much needed spring clean are the Galvone Industrial Estate, which was ranked as a litter blackspot in the Irish Business Against Litter report back in January, as well as Caherdavin, where members of Na Piarsaigh’s hurling panel will join the effort.

Other volunteers include schools, local businesses, plus other sporting and community groups and residents associations.

This year, tea and coffee gatherings for volunteers are being hosted at over 300 hundred locations throughout the county.

Despite the damp weather, organisers are confident the event will surpass last year's effort.

Rain hail or shine we are ready to clean Limerick for #TLC3 pic.twitter.com/NxrtfB8yXy

Mayor Kieran O’Hanlon – who will join Mr O’Connell and Mr McManus at the launch to help recreate the iconic Beatles Abbey Road album cover – said he was “proud to be Limerick’s first citizen today.”

“As Mayor, I’m delighted there are over 16,000 people on our team making sure Limerick is looking its best. That’s what we want to always see in Limerick," he said.

"I thank them all for their work, as well as the organisers. It makes me so proud to be the mayor when I see this happening. I’ve visited lots of schools and I have spoken to lots of kids about keeping our city and county clean and making sure when people come, they know we have a great place to visit,” he added.

Mr McManus said: “The number of volunteers this year has exceeded all expectations and we are absolutely delighted with the turnout. For me, TLC has become synonymous with Good Friday and being part of the occasion gives me enormous pride. With over 9,000 people joining their friends and neighbours for a cup of tea afterwards, it has become far more than a clean-up, but a way of developing a great community spirit in localities around Limerick.

"The entire event is a huge community effort from the people of Limerick and we want to thank each and every one of them for taking part.”

Paul O'Connell, one of the key drivers behind TLC, said "the comradery that makes TLC such a successful campaign is at an all-time high and we hope that this trend continues with each passing year."

Over 16,500 volunteers have signed up to Team Limerick Clean-up3 since the campaign was launched, making it the largest clean-up in any European country.

- We will have rolling coverage of TLC3 on all our online platforms including www.limerickleader.ie, @limerick_leader and www.facebook.com/limerickleader. Organisers are encouraging the public to tweet them at @TLC_Limerick, and use the hashtag #tlc3