Gardens International site in Limerick to grow with €17m deal

Building to be ready for occupation within 60 weeks, it is hoped 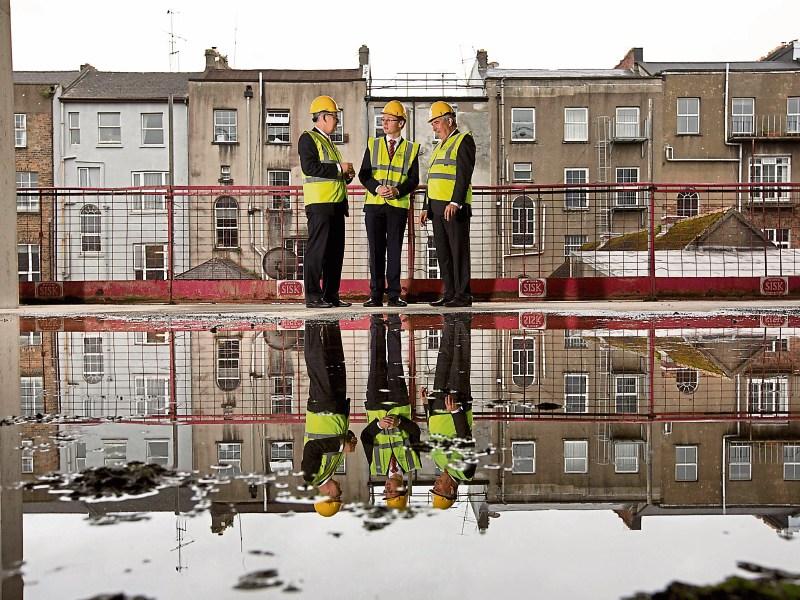 CONSTRUCTION work to redevelop Gardens International in Limerick city into office space for 700 people could start by next week as the council appoints a contractor to the €17m project.

The Chronicle has learnt that JJ Rhatigan has been appointed to carry out the major scheme, which will see the half-finished Henry Street site completed, alongside the building of a new five-storey office block at a neighbouring site.

While the lead contractor has already carried out conservation works in the area, builders are expected to be there from next week, with contracts worth approximately €17m being exchanged this Tuesday.

It is anticipated the building will be ready for occupation within 60 weeks, it can also be revealed.

Cllr James Collins, who sits on the board of Limerick 2030, the company spearheading the development, said there has already been huge interest from private firms in locating on site, while Mayor Kieran O’Hanlon hailed the latest news as “a milestone in the recovery of our city”.

Formerly known as the Hanging Gardens, Limerick council bought the site to address the lack of grade A office space in the urban area, and to attract blue-chip multi-nationals.

“There has been strong interest from lots of different sources, some multi-national, some domestic. It was a partially-built office block which had been left idle by a developer. We had to rework the design to be more suitable for today’s needs. I think we have achieved that,” Cllr Collins said.

He also revealed that it has not yet been decided if just one company will locate in the building, or whether several will. The building, he added, will have the highest energy rating.

“This opens up other opportunities to us as some companies will only consider buildings of that category,” he added.

Niall O’Callaghan, the IDA’s regional manager, said: “We have shown multiple clients of ours graphic images in relation to what Gardens International will look like. We’ve been marketing it vigorously for the last number of months in anticipation of its completion, and we’d certainly be optimistic once it is completed, it will deliver foreign direct investment for the city centre.”

Limerick council bought the site from Nama after the agency took it over from developer Robert Butler, who fell into financial difficulties during the recession.

The original plans would have seen retail space at ground level, and four floors of office accommodation over basement parking.