Timeline: How the University of Limerick expenses saga unfolded 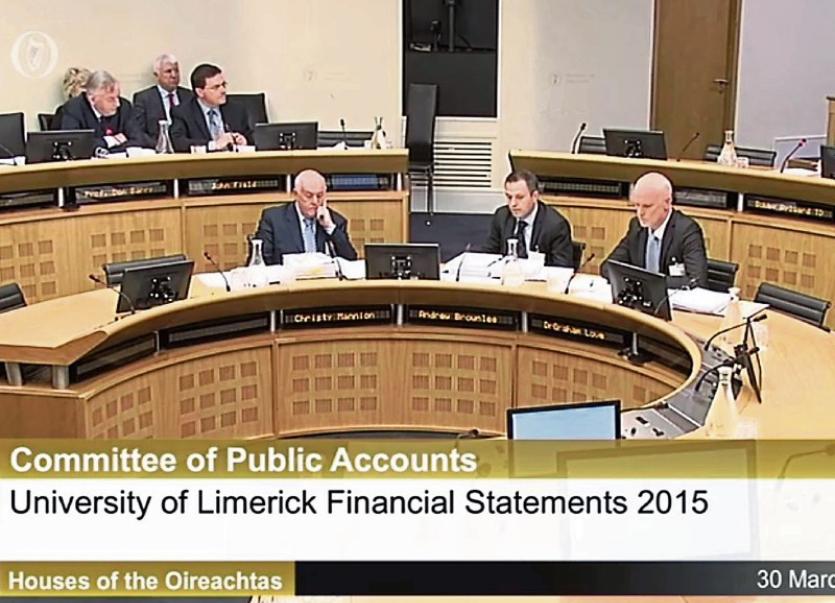 Don Barry and John Field before the Public Accounts Committee

THE University of Limerick’s president, Prof Don Barry, and its director of finance, John Field, have appeared before the Public Accounts Committee to answers questions on its financial affairs. Here’s how the case has unfolded to date:

December 2008:  The vice president of finance at the University of Limerick receives a six-figure severance package to leave UL, after holding the role for over three years. President Don Barry has denied the package was offered as a result of the employee expressing concerns over its financial affairs

March 15, 2012:  Fianna Fail TD Niall Collins sends a dossier to the Public Accounts Committee compiled by former UL finance employee Leona O'Callaghan concerning a number of questionable expenses she was asked to process. Her concerns are later strongly rejected by the UL president in a letter to the PAC

December 2014: Complaints are made by two employees in the finance department against a colleague following a staff night out

April 8, 2015: A report by an independent investigator, paid by UL, finds two employees guilty of making a malicious complaint against a work colleague, after they reported an alleged physical threat made against them to An Garda Siochana

April 22, 2015: Before they can appeal that finding, the two staff members, one of whom replaced Ms O’Callaghan, are invited in Dublin to sign compromise agreements of nearly €60,000 each, with the settlement including a confidentiality clause. They decline to do so

September 2015: The Limerick Leader runs its first front-page report on the grievances of the two suspended UL staff. UL sues

October 2015: The Higher Education Authority (HEA) appoints independent consultants Mazars to review the processes and procedures employed by UL in dealing with the complaints of the three women – Persons A, B and C

February 2016: The HEA expresses concerns that “there may have been, or may still be, a culture in the university of inappropriate claims being made, until challenged”, following the publication of the Mazars’ report. UL rejects this

April 2016:  Department of Education confirms that UL did not seek prior written approval in relation to a €150,000 severance payment to a staff member, following on from two earlier payments – amounting to more than €450,000 – which were questioned by the Comptroller & Auditor General

May 2016:  UL drops its defamation action against the Limerick Leader and its editor in the High Court, following pressure from Fianna Fail deputies Niall Collins and Willie O'Dea in the Dail, the National Union of Journalists and the HEA

June 2016:  A full year passes since the employees were suspended with pay, with the cost to the State, including suspension payments, the Mazars report and another report by a facilitator mounting to in excess of €200,000.

January 2017:  UL whistleblowers stage a sit-in at the Department of Education over ‘inaction’

March 2017:  The PAC hearing into UL finances takes place. TDs hear that UL has now replaced both employees, while continuing to pay the suspended whistleblowers

May 2, 2017: Professor Desmond Fitzgerald takes up office, and relays his views on how to resolve the long-running saga to the Department of Education

May 5, 2017: A full inquiry into allegations at the University of Limerick, under the Department of Education, is announced