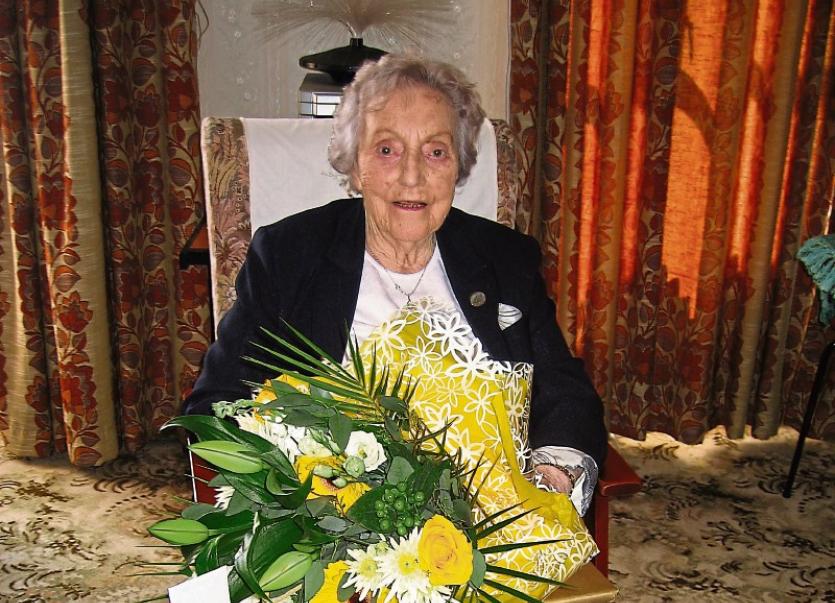 Sr Alphonsus O’Brien, originally from Limerick city, is presented with a bouquet of flowers on her 100th birthday

“EVERY day is a bonus,” a Limerick nun who has celebrated her 100th birthday has said, giving “thanks to God for having travelled so far.”

A native of Limerick city, Sr Alphonsus O’Brien, who now lives in Bandon, county Cork, said that upon leaving school in her teenage years, she was challenged by a call from God to enter a convent and become a nun.

“It was a stressful, disturbing and turbulent time,” she said.

“After all, to me, nuns were very holy people who devoted their lives to God, lived in convents and kept rules. I tried to forget it as I genuinely felt that no religious community would have a girl like me in their midst.”

She said the lines from the Robert Frost poem, The Road Not Taken, haunted her - of two roads diverging in a yellow wood.

“I had to make a choice as to which road I should take. I prayed for guidance – and I cried a lot too. A good friend, who was a priest, became the answer to my prayers and my tears.”

He suggested that she visit the Presentation Convent in Bandon, and once she has done so she was “surprised to be greeted with such love.

“The welcome I received convinced me that my decision was made. It was such a comfort that my journey was not in vain. I was filled with contentment which in turn lead to a strong sense of reassurance.”

However, she said it wasn’t all ‘sunshine and light’ as she tried to live out her calling.

‘Into each life some rain must fall’, and at times it came in torrents, she said.

When she retired from teaching in the primary school, aged 65, she began to feel “a little depressed”.

“Teaching was my joy. I loved the children. The classroom was my dream world and drama my passion. It gave me scope for my imagination, creativity and dramatisation.”

And so, she continued with her speech and drama classes and stayed involved in the world of theatre.

Among the long list of accolades received by Sr. Alphonsus over the years, the one closest to her heart must be the Pro Ecclessia et Pontifice for church and people awarded by Pope Francis in 2016. This is the highest honour the Pope can bestow on a lay person or a cleric.

Born on March 24, 1917, at No. 8 North Strand to a talented musician father who taught music in the Technical Institute, and a mother renowned for her theatrical talents, those talents passed on to her daughter, who showed her own dramatical process in the Model School.

“Interested only in the performing arts” was a comment she received from her teachers at the end of her school days.

And now, even in her 100th year, one of Sr. Alphonsus’ priorities still lies in preparing her students for the junior silver and diploma exams for the Victoria College of Drama.

Though she has lived in Bandon for most of her life, Limerick always holds a special place in her heart - which is most audibly evident when the “beautiful silence of the convent explodes with cheers for the Munster men”.