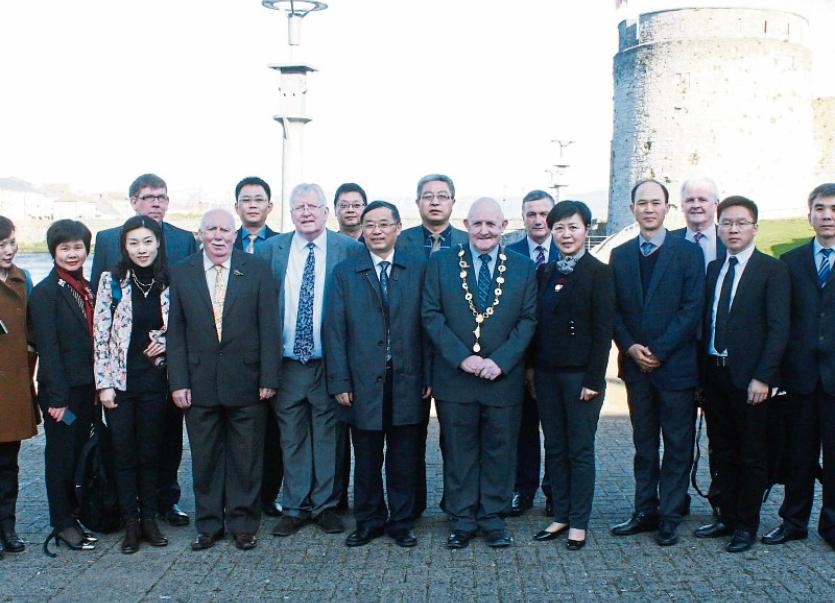 A delegation from Limerick’s sister city in Nanjing

A DELEGATION from Limerick’s sister city in Nanjing have visited the city to examine the possibility of cross-continental investment.

Over the last five years, Limerick has developed the relationship with the south-west China city.

And the delegation from the city’s municipal economic and information technology commission were on Shannonside eyeing up opportunities last week.

Wang Shaojun, the associate counsel, said there were many areas where two cities could collaborate.

Speaking through a translator, he said: “We think we have a lot in common in terms of areas where we can co-operate. Especially in the areas of biomedicine, the technology, the education and the tourism sectors.”

The Limerick-China forum chairman Jim Long was mayor when the two cities signed a memorandum of co-operation back in 2012.

He joined the delegation in the city this week, as they visited Mayor Kieran O’Hanlon’s office, as well as the University of Limerick.

Mr Long said: “When we visited Nanjing in 2012 and signed a memorandum of co-operation, we were very well advised that it would take six to seven years [for us to see results].

“Since then, there has been ongoing dialogue and I think we are nearly at an end of discussions.

“I think very soon, there will be advancement in the areas of tourism, education and technology. And I’m looking forward to that day.”

Asked why he picked Limerick, Mr Shaojun added: “We have a lot in common. Limerick is famous for its software industry, and we want to co-operate in this instance.

“Limerick University is famous in Nanjing. We would like to see further co-operation in education,” he added.

Members of the Limerick-China forum will head east this September for a major expo highlighting the possibilities of the region’s computer industry.

Mayor O’Hanlon said: “I think there is huge opportunity with the Chinese community. They are looking for opportunities to invest and Limerick is ideal for business, cultural and sporting events.”